Our journey through Tanzania consisted of three stages:

Those who’ve been following this Tanzanian mini-series will know that I haven’t told you about the last stage yet – Zanzibar. So here it is: tales from the final stage of our January 2016 Africa adventure.

Upon arrival we were straight into it: snapping the super sunset: 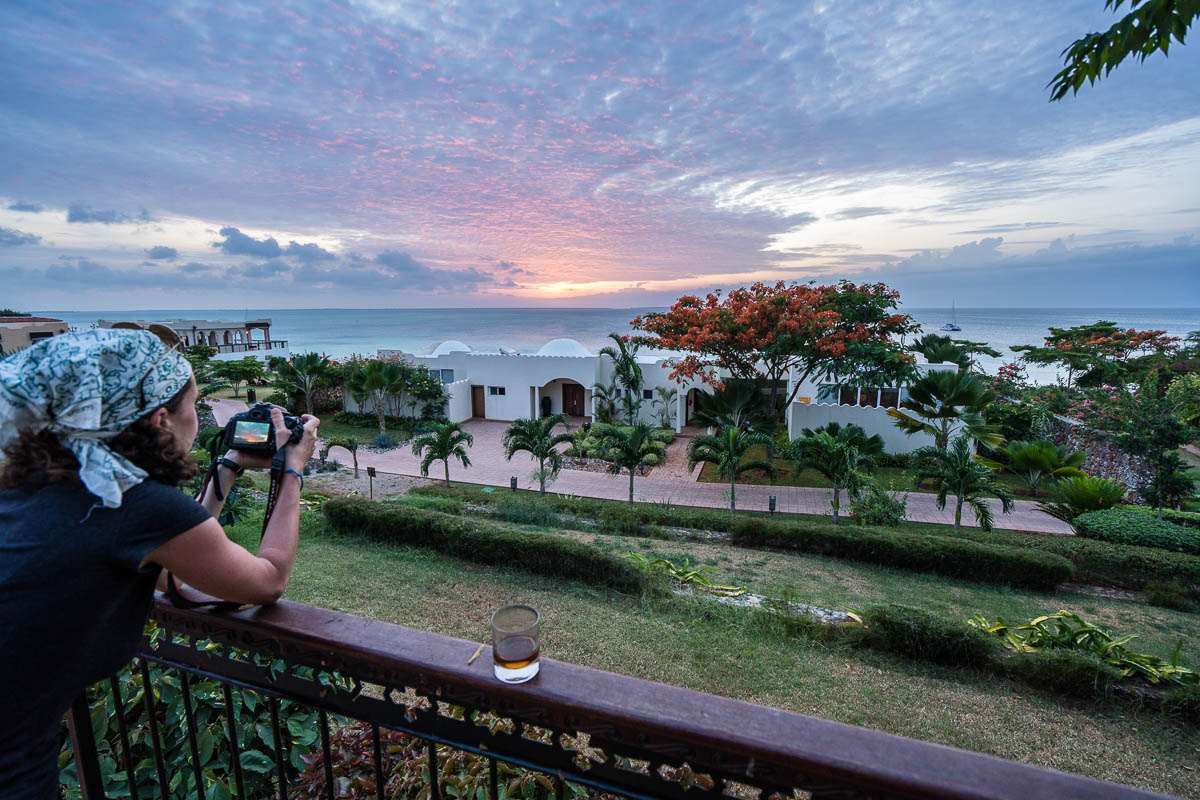 I have to admit that I didn’t quite know where Zanzibar is. Well, I knew it was in the Indian Ocean somewhere, but that’s about it. But what was a real revelation for me was that the Zanzibar archipelago belongs to Tanzania!

All I was told of Zanzibar before getting there was about its beautiful beaches and the hot ocean water splashing over them. Also, its crazy low tides that extend the beaches out towards the ocean a lot further than you’d normally expect. And crazy stunning sunsets.

And it all turned out to be true. Well, apart from the sunsets, in that we were unlucky with them: we only saw the one spectacular sunset on the evening we arrived. After that the horizon was always shrouded in dense cloud of an evening. But for the rest – oh yes: plenty…

With legs tired from all the trekking up and down Kili, and with bodies thoroughly shaken – and stirred – from the bumpy safari roads and all we saw from them, respectively, Zanzibar was just the thing we needed. For it is paradise – all of it, 24/7.

Along the coast there’s the usual resort scenes: folks sunning and bathing, boats cruising, fish swimming – and being caught.

Brazil? (the flag on a boat). He’s come a long way! Turned out he was just a fan of both soccer and Brazil. 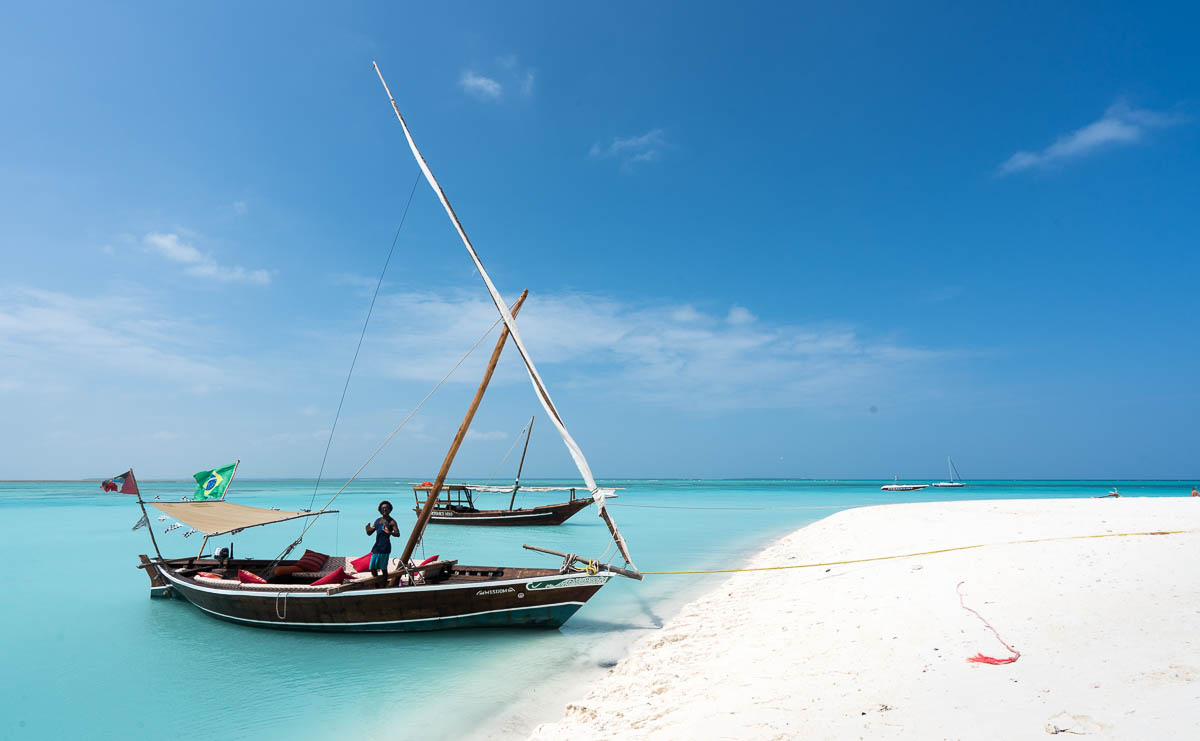 This next pic got me thinking… ‘Blue Ocean, low tide’. Don’t think I’ve heard that particular business term before. Aye, because I’ve just made it up :). 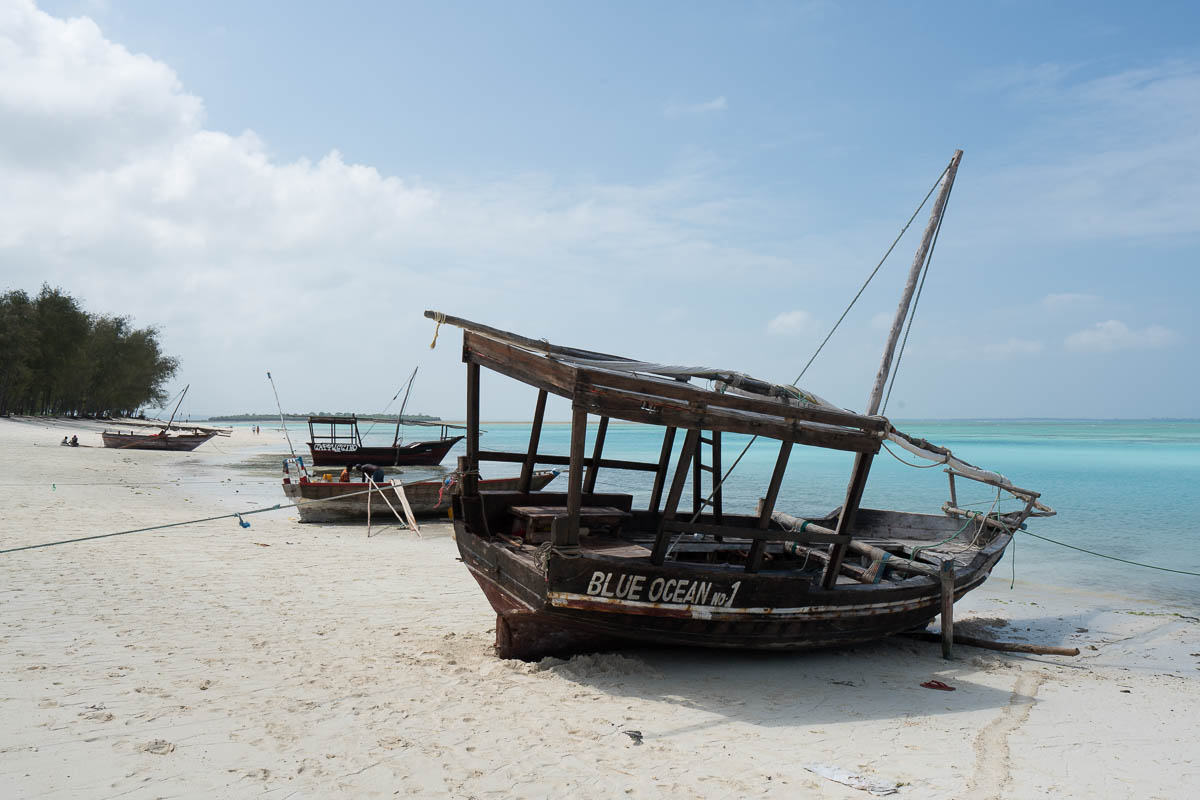 I really like wandering hither and thither on such a beach, inspecting all the activity going on along it, people watching, and of course seeing how much they depend on modern SCADA industrial systems – and rejoicing that they don’t depend on them one bit: they know all about air-gap security :). So, reassured that there’s no work for us to be done here, I could relax and just stroll, snap, pina colada, sun and chill. Sweet.

The Internet states that Zanzibar beaches are… tricky. That, because of really fast ebbs and flows of the ocean, of a morning, one minute your stretched out on the sand with your toes in the sea, the next minute that sea is hundreds of meters away. So you either have to wait for the tide to come back towards lunchtime to continue your bathing, or follow the tide in and out repeatedly to ‘keep up’ with it. Some tourists, it’s said, find this an inconvenience. No comment!

Well those Internet tales turn out to be true…

The seawater really does go out real far. But even if you do decide to chase it out, you still won’t get any decent swimming done: even if you walk into the sea hundreds of meters, it still only just comes up above your knees. Now that can be inconvenient :).

On the other hand, when the tide’s you’re forced to indulge in a spot of art shopping – right on the beach…

While browsing all the paintings for sale, the tide had gone still further out behind our backs! What was left were expanses of seaweed-strewn beach, which were swiftly investigated by Petrovich. “Hey, Petrovich. Where you off to?!”…

“I’m off to check out that new, unknown industrial gadget!” shouts back Petrovich. We try and explain there’s nothing digital over there, so what’s the point? But he goes and investigates regardless… 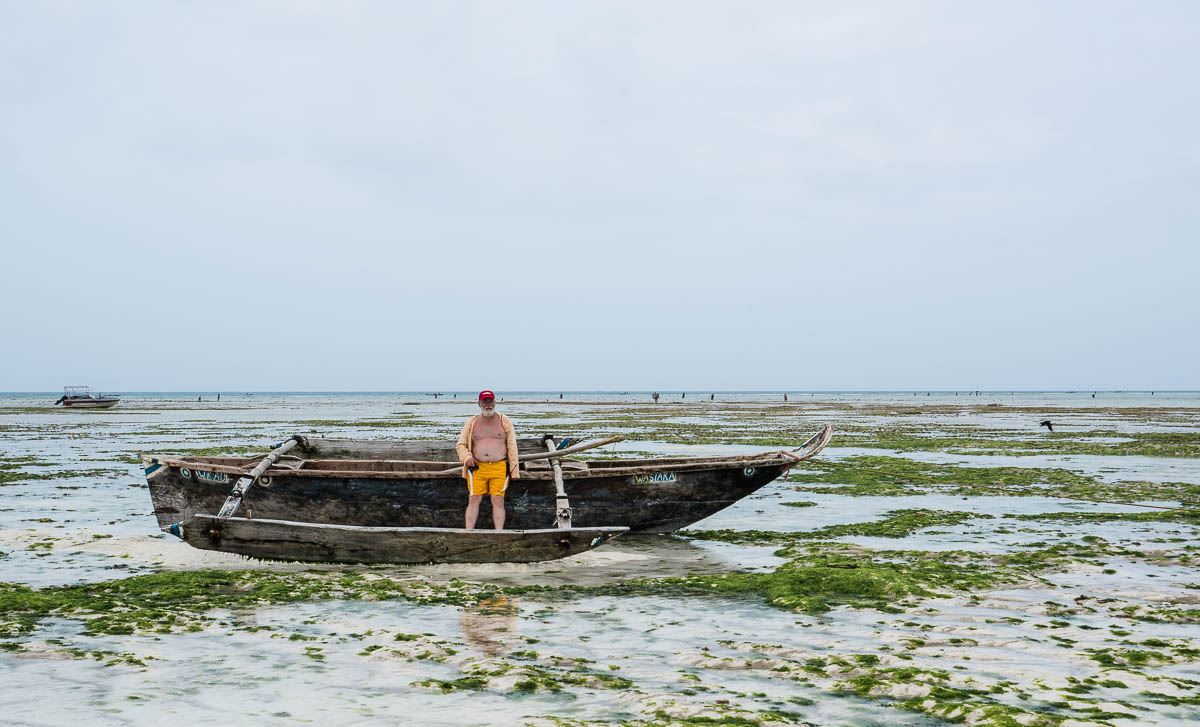 The boats were parked up on the beach because it was Sunday. The following day there weren’t any to be seen at all – they were all out to sea, the working week having begun… 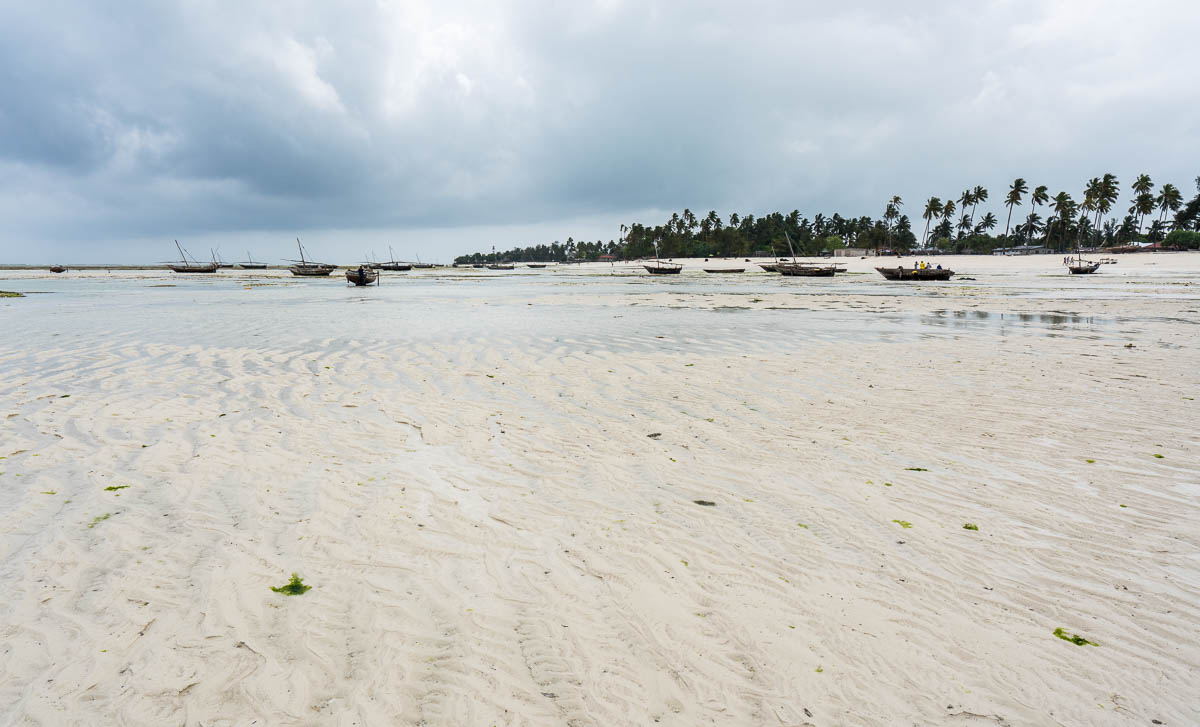 The upside of the mega ebbs of the tide is that you can walk hundreds of meters from the shore – sometimes up to two kilometers from it! – and check out all the sea life in the shallow pools that are left.

Here for example are stranded sea urchins. They look so sweet and innocent, but step on one and you’ll be limping for a week or two. 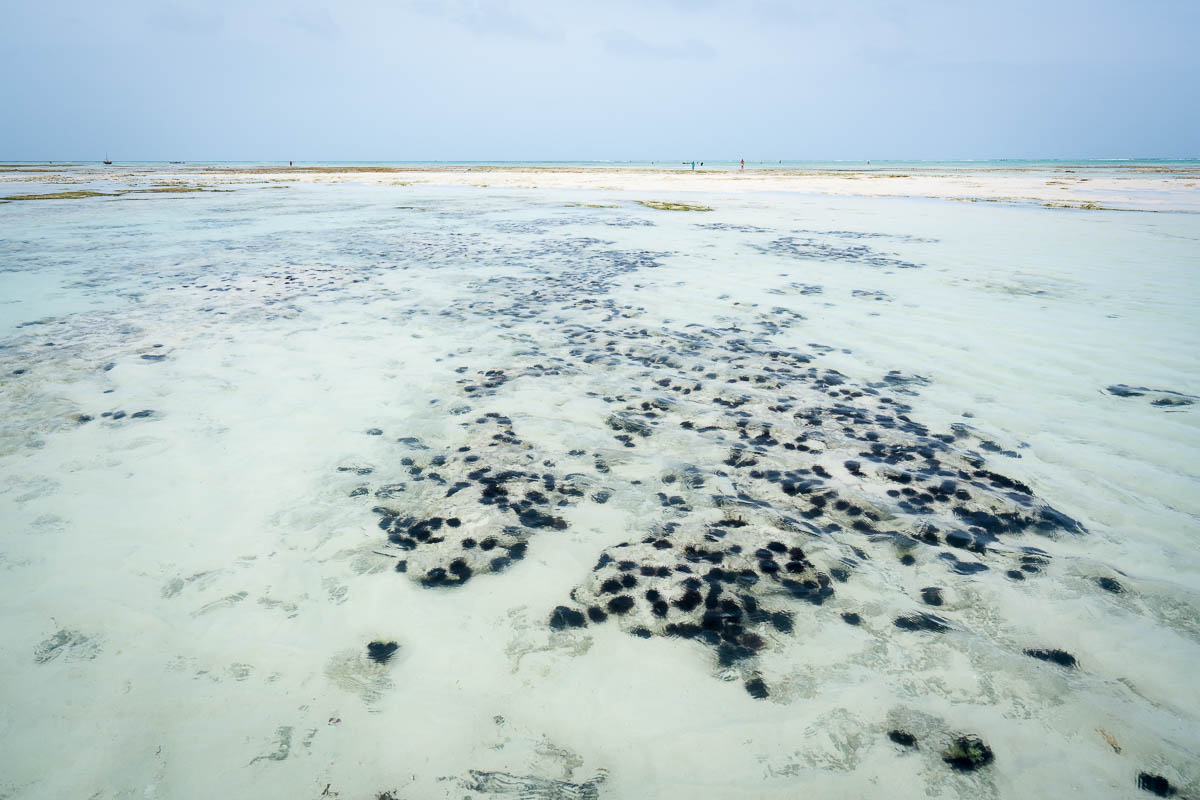 Woah! Starfish! Just look at that! It has no brains whatsoever, but still manages to look stunningly elegant. Stunned we were indeed.

The lighthouse is the northernmost point of the island, where we about-turned and headed back south. 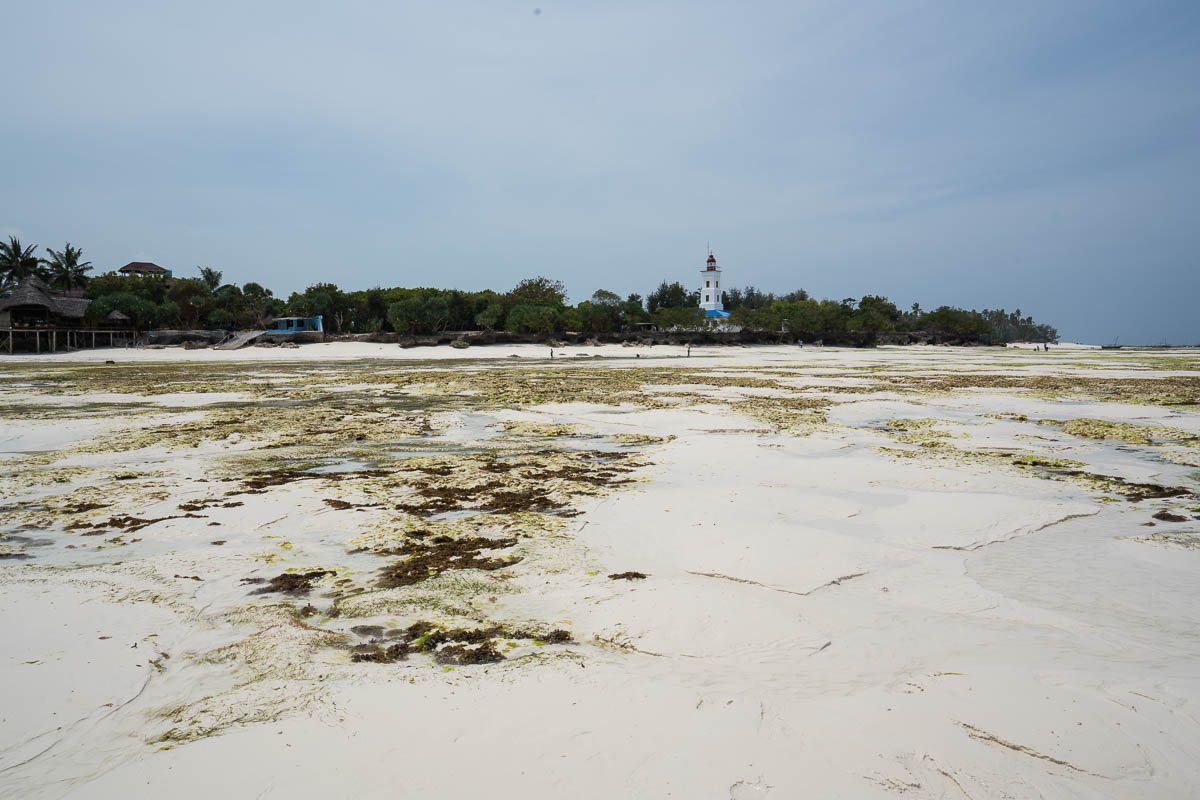 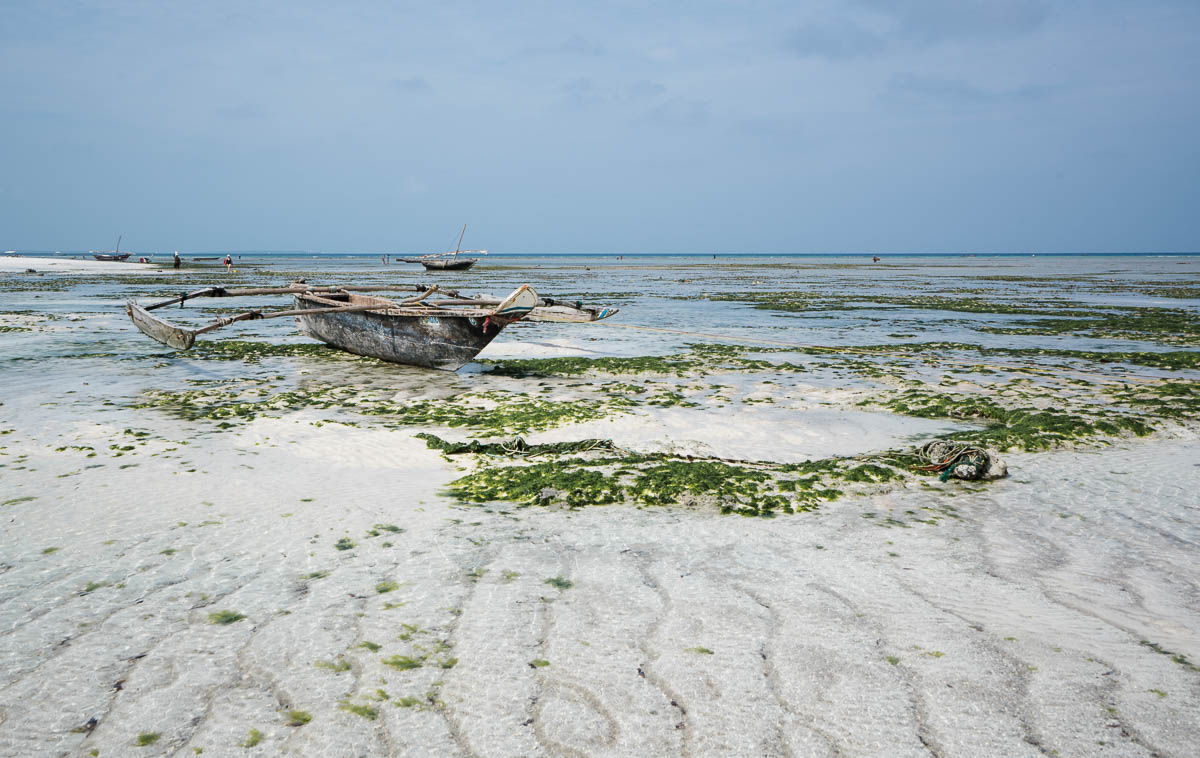 The archipelago is called Zanzibar, while the capital is called Zanzibar City, on the island of Unguja. It’s a very old African-Arabian city. Though cramped and dirty, it’s said to be a hit with tourists (“it’s so genuine”:); which brought me to the conclusion: I’m not a tourist :).

In this house here, 70 years ago, a certain Farrokh Bulsara was born. You might know him better by his stage name: Freddie Mercury!

Zanzibar is one of the oldest centers of the slave trade. That fact is about all we got to find out on the topic though, as we didn’t spend long in the city to learn more.

Moving swiftly on, on our way home I caught a ‘king fish’. We ate half of it for dinner (only half – between all of is (it was huge!)).

Changuu, aka Quarantine Island, is best known for its giant turtles, which were originally brought to the island by the neighboring Seychellois in the early twentieth century. There’s some less benign history here too, which you can probably guess by the alternative name of the island. Yep, it was used as a prison – “for rebellious slaves in the 1860s”.

Back to the turtles: they really are huge. If I compare them to those I’ve seen in all sorts of other places, these are by far the biggest I’ve seen. V.K. took a particular liking to these shielded amphibians… Oh no – mistake! Turns out they’re not amphibian, but reptilian. Crikey; live and learn.

Parental Advisory! These two love birds turtles have a whole 138 years between them! Yep, the guy is 192, the girl 54! 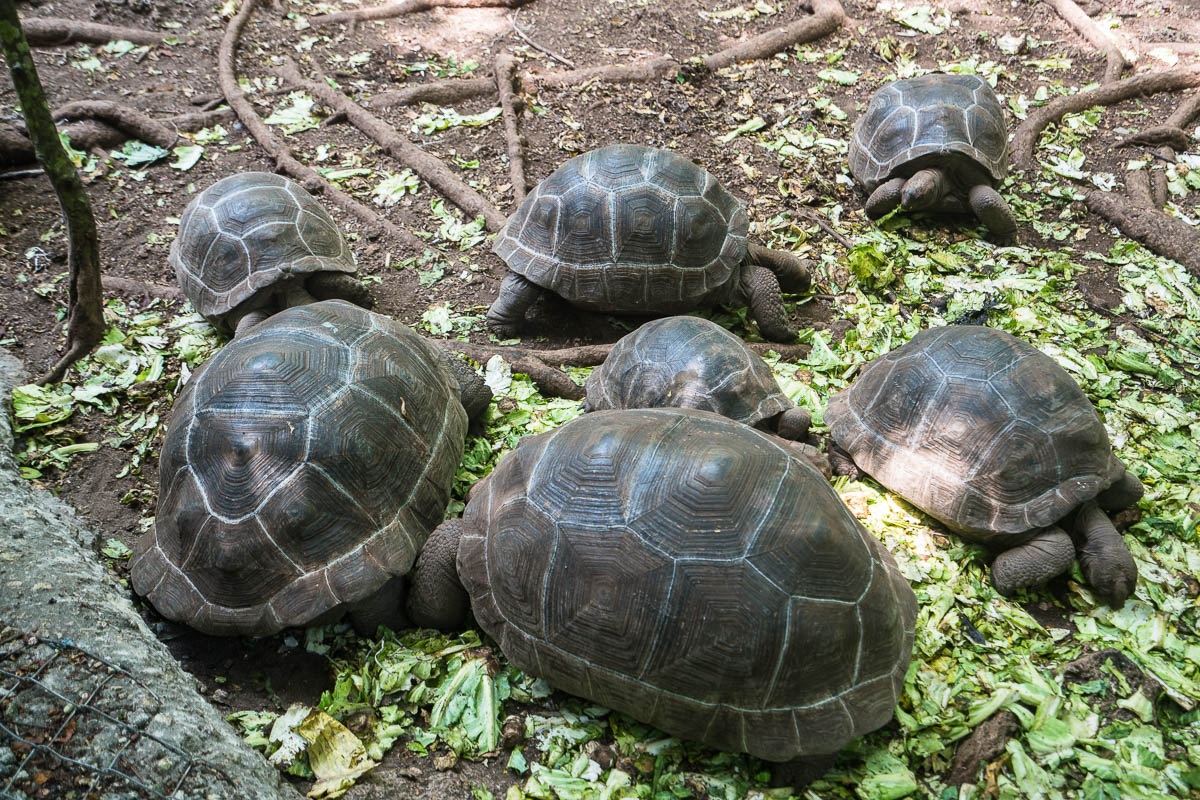 And that just about wraps up my tales from Africa – at least for now. What an experience: Up a volcano, across the savanna on safari, and idyllic beaches (and… original low tides) – all within two and a half weeks. In places is was tough, sleep was scant, there were loads of transfers between our various stops, and the tips of our index fingers were almost blistered with snapping. But all the same, I recommend it to everyone. I’m already missing it! 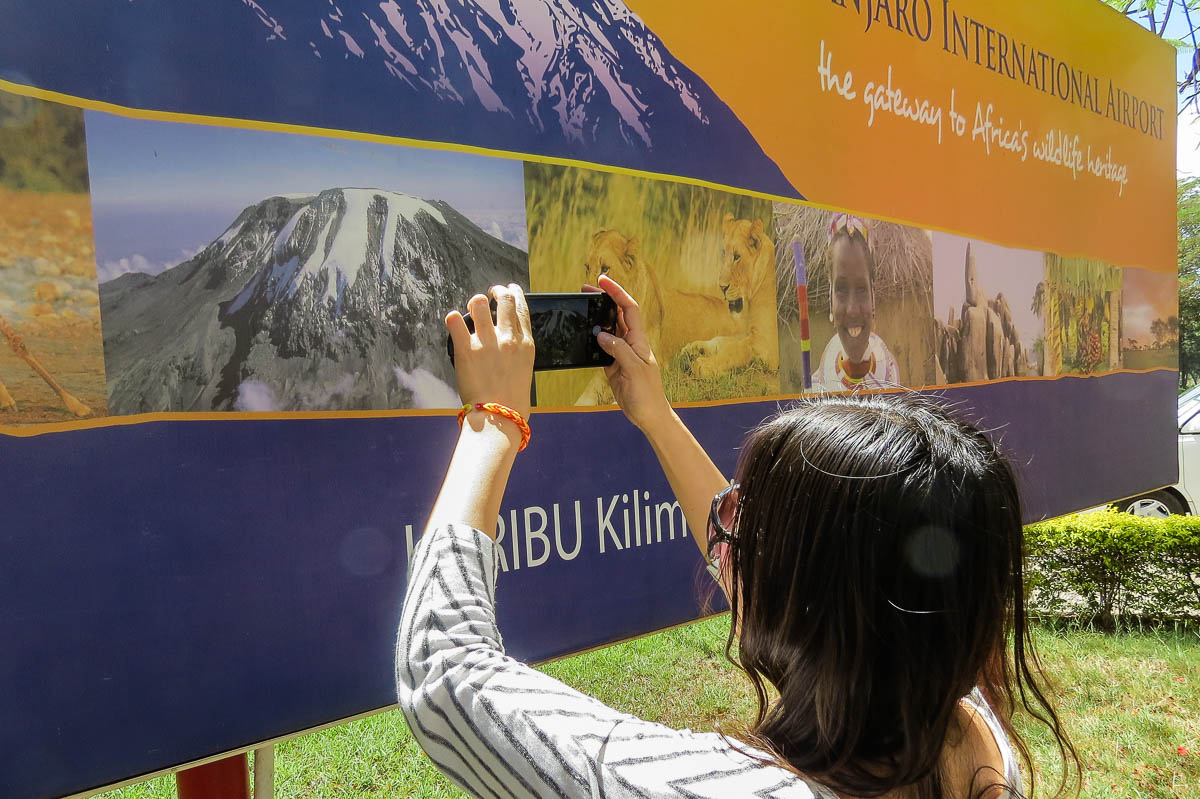 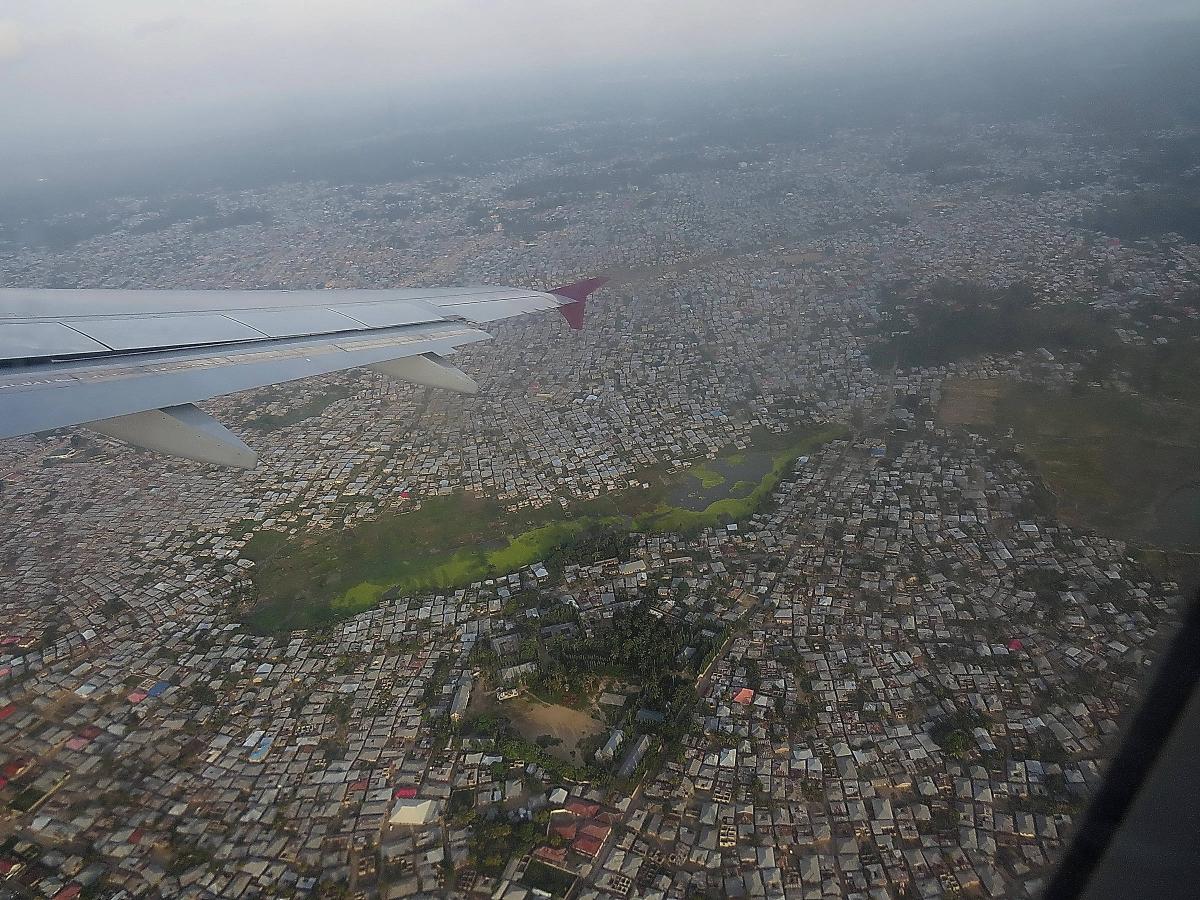 The rest of the photos from Tanzania are here.