First, a brief summary of the previous two parts…

On the Swiss-French border, near Geneva, there’s a place called CERN. Within its various buildings, modern-day alchemists scientists conCERN themselves with the fundamental structure of the universe. They disperse protons and other particles at near light speed and have them smash against one another, which creates various kinds of quark-gluon plasma and other mysterious physical phenomena. Then they apply titanic brainpower (math, physics, nuclear physics, quantum mechanics… all that), engineering capacity, and computing power to track the results of collisions of these fundamental particles.

We were there the other week and given a good long guided tour. Took lots of pics too…

The first accelerator we saw is called LEIR (the Low Energy Ion Ring). In it, lead ions are pooled. First the ions come from the LINAC-3 linear accelerator to LEIR, then they pass through to a PS ring, and then into a complex of big hoops, including the Large Hadron Collider (LHC). 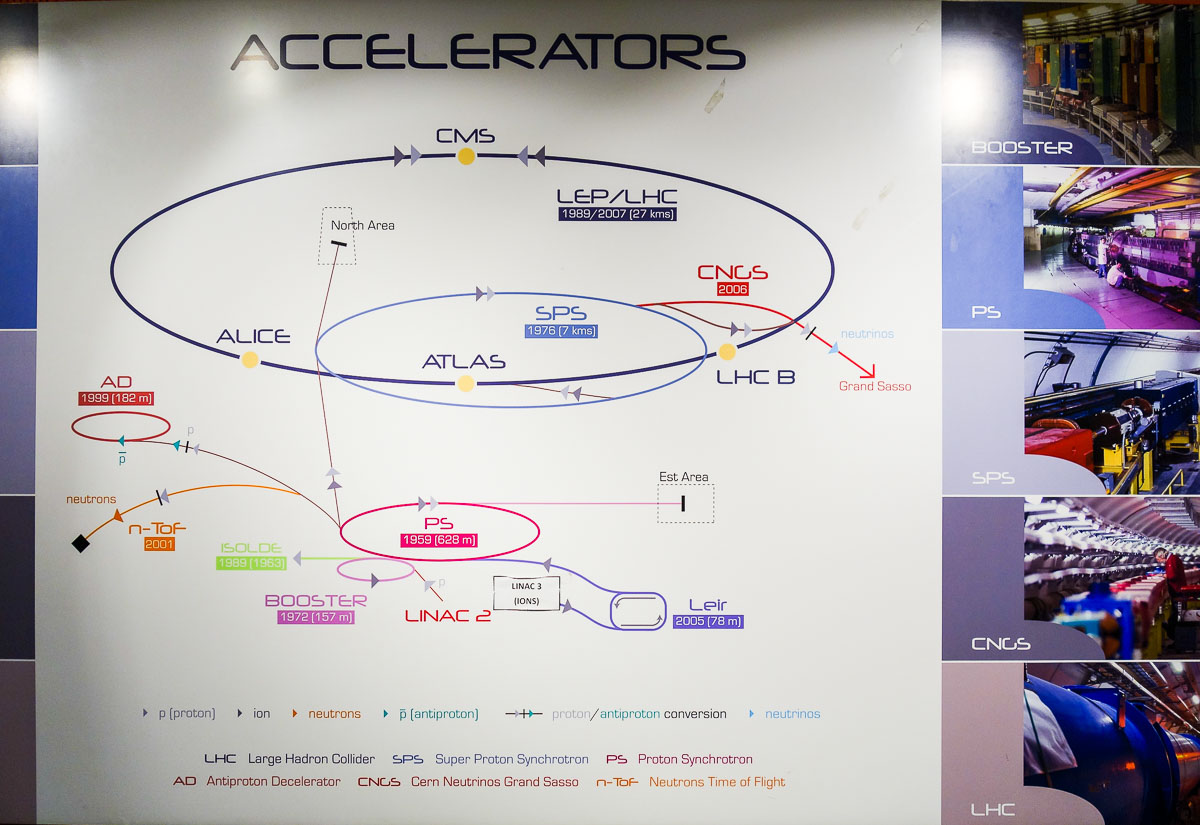 The LHC – now this is just one mega-grandiose device. It’s nearly 27 kilometers long – deep underground (for practical reasons, but also so that atmospheric ‘noise’ doesn’t affect the observation of collision results). It’s filled with tons of special devices for the dispersion of atomic particles, their collision and the recording of the proceedings.

Particles fly in beams in a vacuum along two parallel pipes (in opposite directions), and at certain places bundles thereof collide. The beams are guided around the accelerator ring by a strong magnetic field maintained by superconducting magnets. Superconductivity is reached with the use of cooled liquid gel. All this process eats up around 180 megawatts of electricity from France. 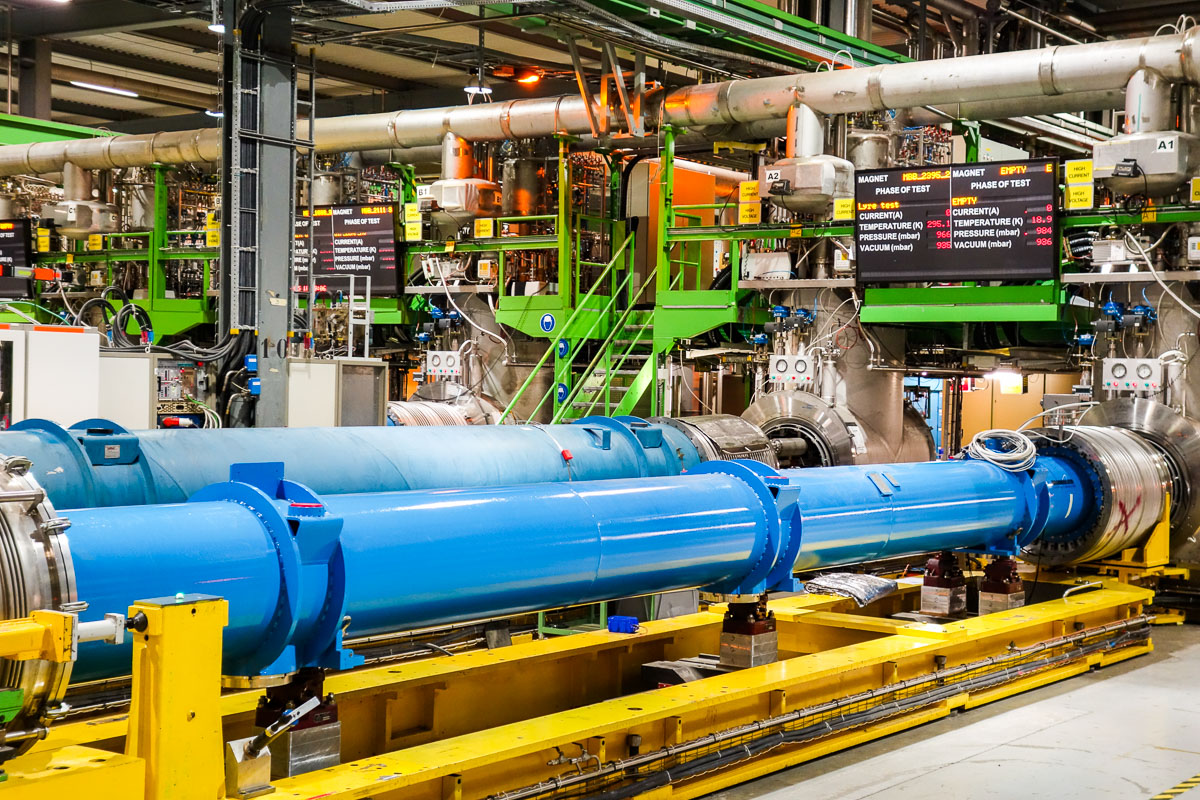 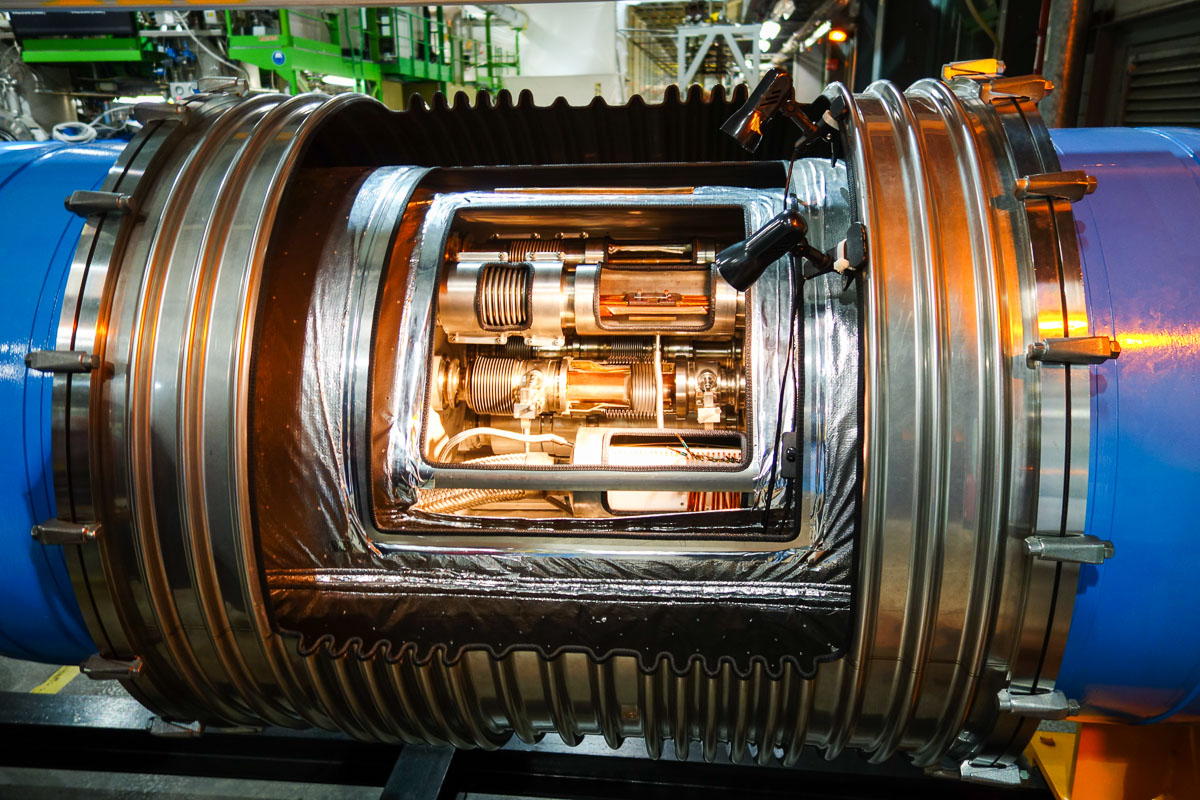 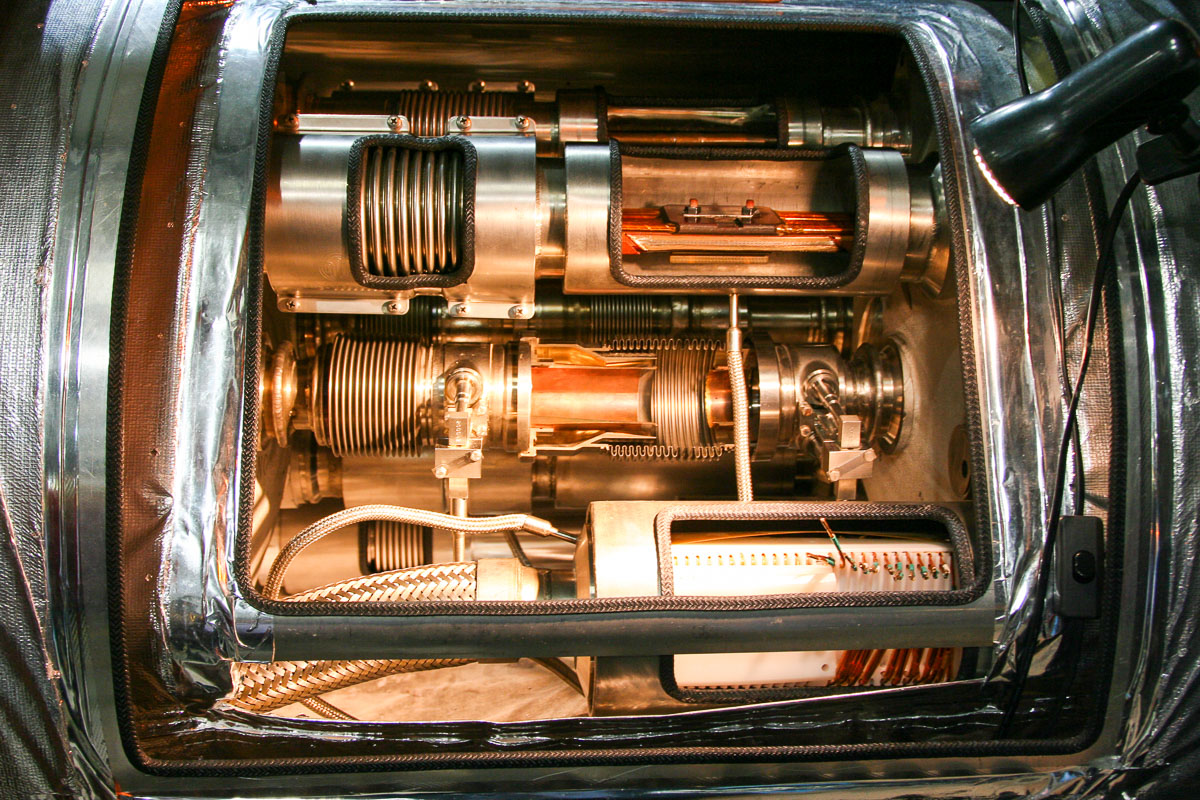 For everything to work some unimaginably advanced technical wizardry needed to be invented. For example, upon cooling with liquid gel (down to -271°C – just two degrees above absolute zero), the iron parts contract somewhat, so the pipes need to be made with special ‘muffs’ and/or bends to be able to withstand such changes in sizes.

Next, cooled to superconducting state, the electrical system of the LHC needs to make contact with the outer ‘terrestrial’ wires, which feed it and heat it with 180-megawatt energy. Here, the energy needs to be transmitted – but without heat being transferred at the same time. That’s just one example of the engineering difficulties faced in getting the LHC up and running and doing its job. There are plenty more…

1) All the protons dispersed in the LHC are taken from an atom of ordinary hydrogen. Just two nanograms of hydrogen per day are used. Put another way, to get just one gram of hydrogen in the pipe the LHC would need to be in operation for a cool… one million years!

3) The kinetic energy spent on dispersing this teeny-weeny bit of matter is the equivalent of that of a high-speed train or passenger plane.

4) The pressure in the beam pipes of the LHC is about ten times lower than on the Moon. It’s called a ‘high vacuum’.

5) The LHC tunnel is on a bit of an incline (just 1.4%). This is done to compensate for the differences in the earth’s texture down below. The Geneva Lake end of the tunnel is situated 50 meters under the surface; the France end – 175 meters.

6) The data recorded in each of the big experiments at the LHC is enough to fill around 100,000 DVDs every year.

7) The superconductivity of magnets for managing bundles of protons is provided by wires containing thin niobium fibers of a width of just 7 micrometers ((0.007mm). That’s 10 times thinner than the width of human hair. And if we were to place all the niobium filaments of the LHC end to end, they would stretch to the sun and back six times, and there’d still be enough left to get to the moon and back 75 times!

So, you get it: this thing is complex and colossal.

It all costs colossal amounts too (and there’s no commercial benefit in sight for years). So it’s only natural that not just one country foots the bill. A whole roster of countries does their bit for CERN and its LHC and other bits and bobs. On this here poster all the different countries that contribute parts are listed (I’m particularly impressed by Italy’s input, not to mention the country with the horizontal white, blue and red stripes in its flag:). 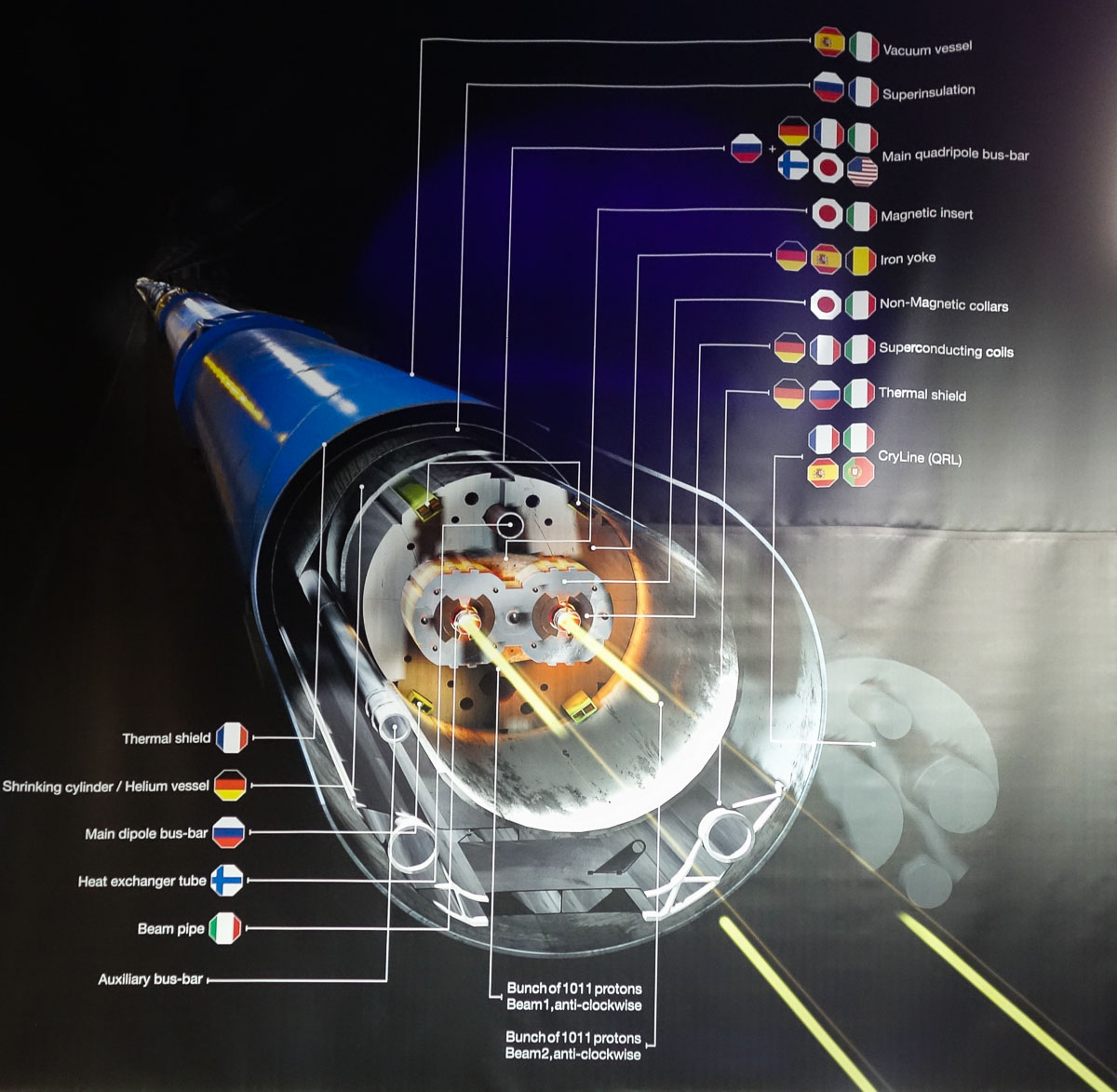 Not impressed with: the lack of a UK flag :) 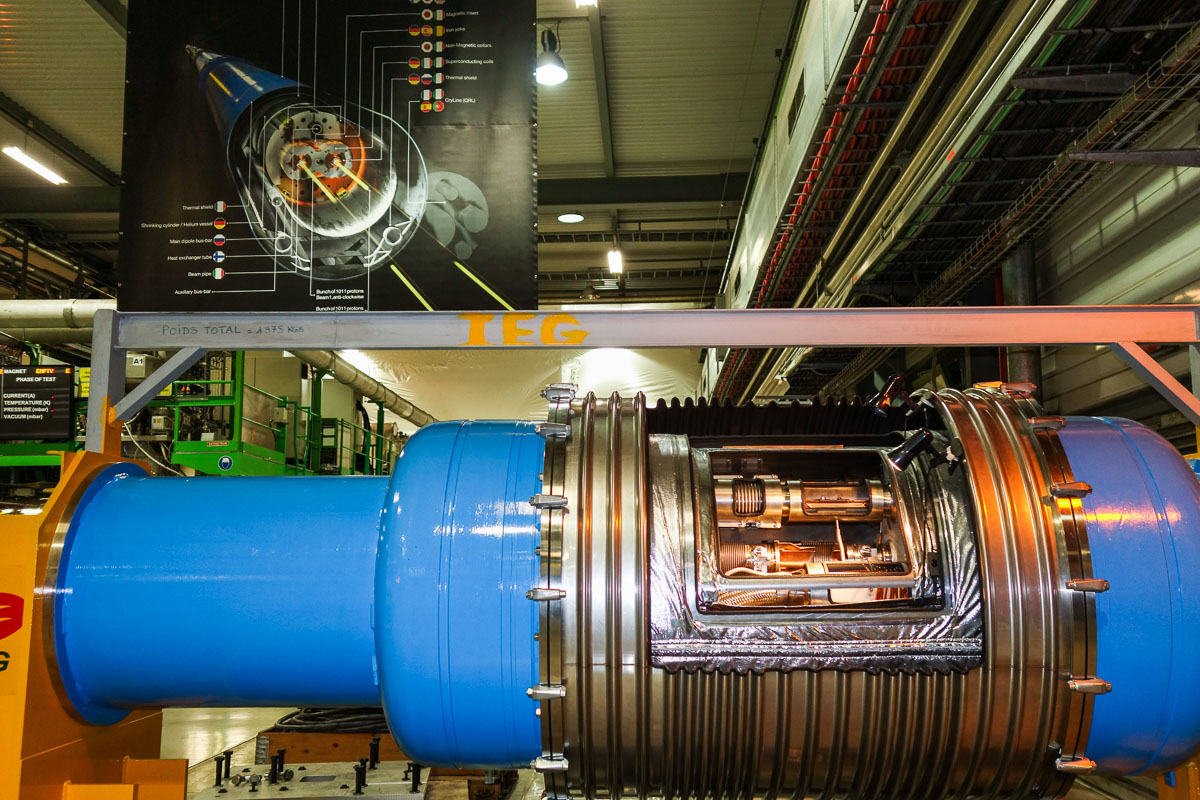 Alas, we weren’t permitted entry into the LHC tunnel itself as on the day we were there it was all systems go underground. We only managed to get into one of the 100m-deep shafts that lead down to the collider. Next time we’ll have to come here during down time to get to see the real deal. When it’s working no one’s allowed in the tunnel due to the strict security rules.

Accelerators (especially large ones) – are very complicated and extremely expensive devices. They can’t really do much harm to the world (just burn a hole several meters wide), but can do damage to themselves. Just look up ‘Hadron Collider crash’ on the net.

Accordingly, on and around all the kit here are installed various multi-level security measures. Everything’s covered with sensors, there are different lock systems, controls, red lamps, ‘Stop! Forbidden!’ signs, and so on and so forth. If something suddenly goes awry, an emergency stop of the collider kicks in, which extinguishes the bundles of neutrons in four cycles (i.e., within a 2500th of a second!). 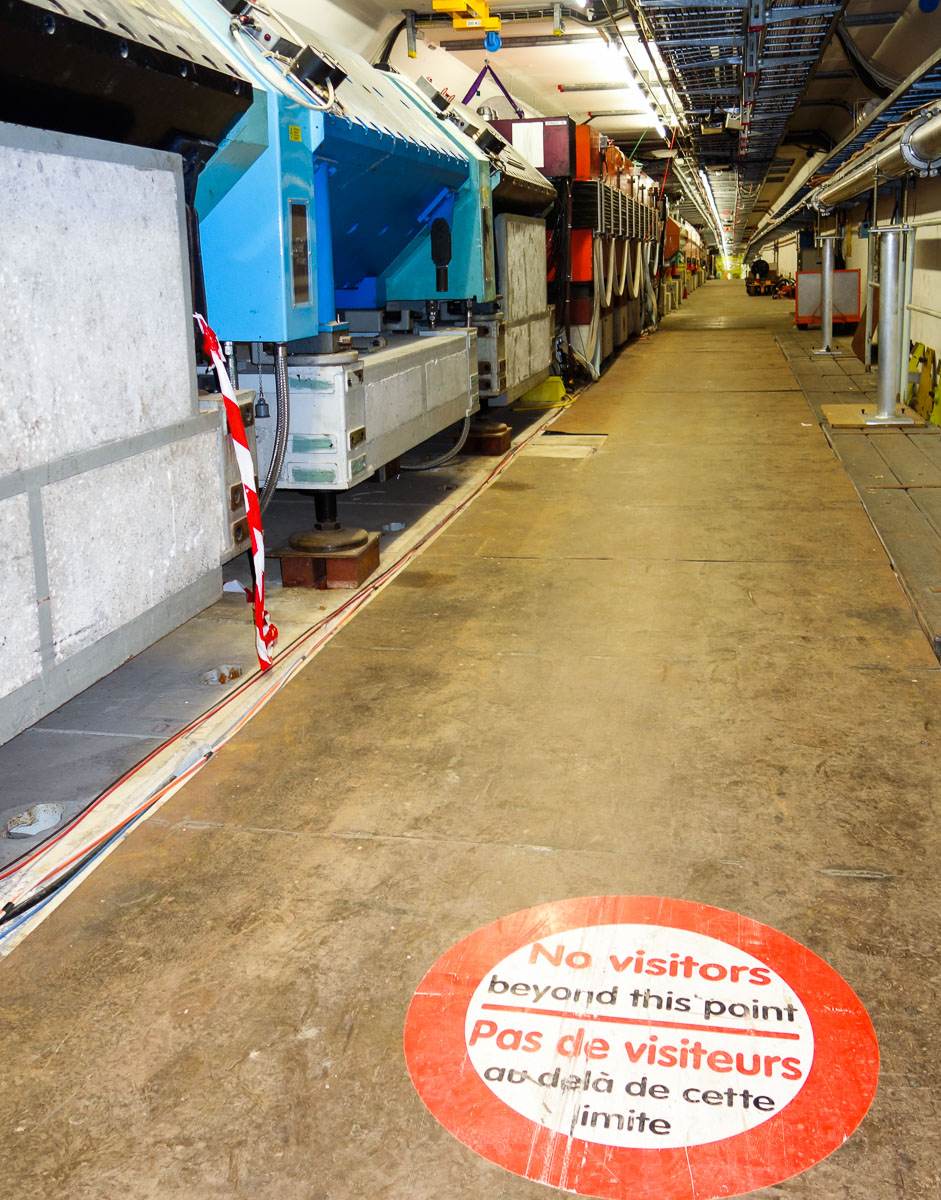 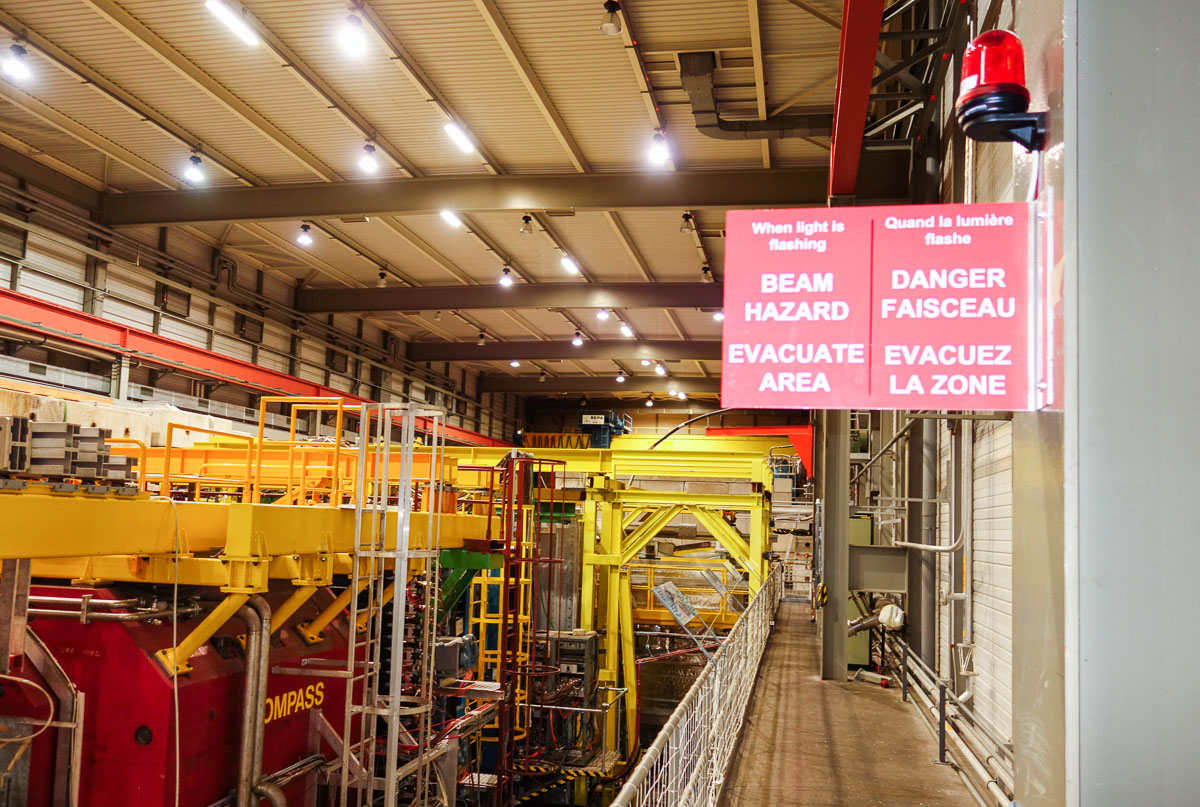 So, yeah, overall, I’m confident that the physical infrastructure at CERN is in safe hands. However, as regards the computer network, which collects and processes infinitesimal quantities of data – I’m not too confident; in fact, I’m anything but.

CERN features a gigantic data center, with the help of which a great many IT inventions of the world came to be (did I mention the WWW?), and there’s a large grid system for distributed computing too. All together the level of computerization here is stratospheric, and without all this computing infrastructure none of the expensive physical experiments would be possible. Accordingly, CERN’s mega-comps and networks all need protecting constantly from all the different malware out there and hacker attacks – which are made on CERN all the time. Alas, that’s the reality of contemporary cyber-life. And that’s where we’d like to step in to help! 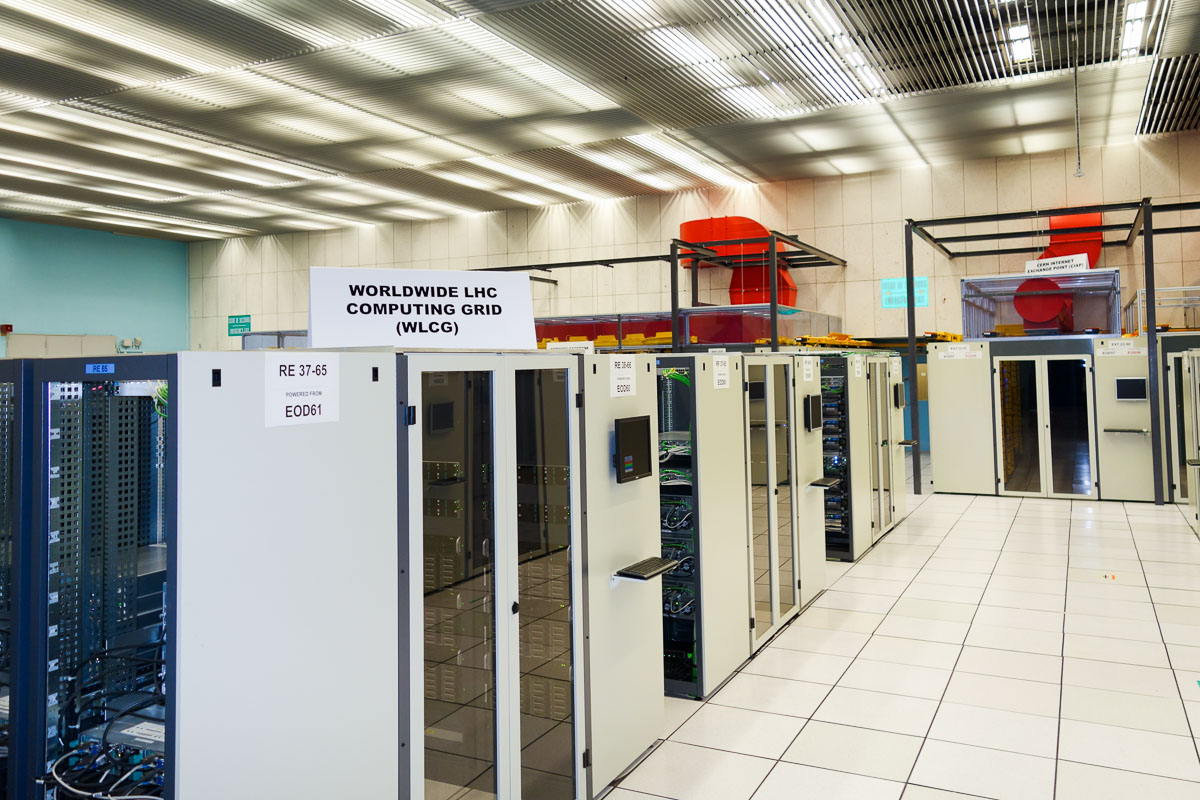 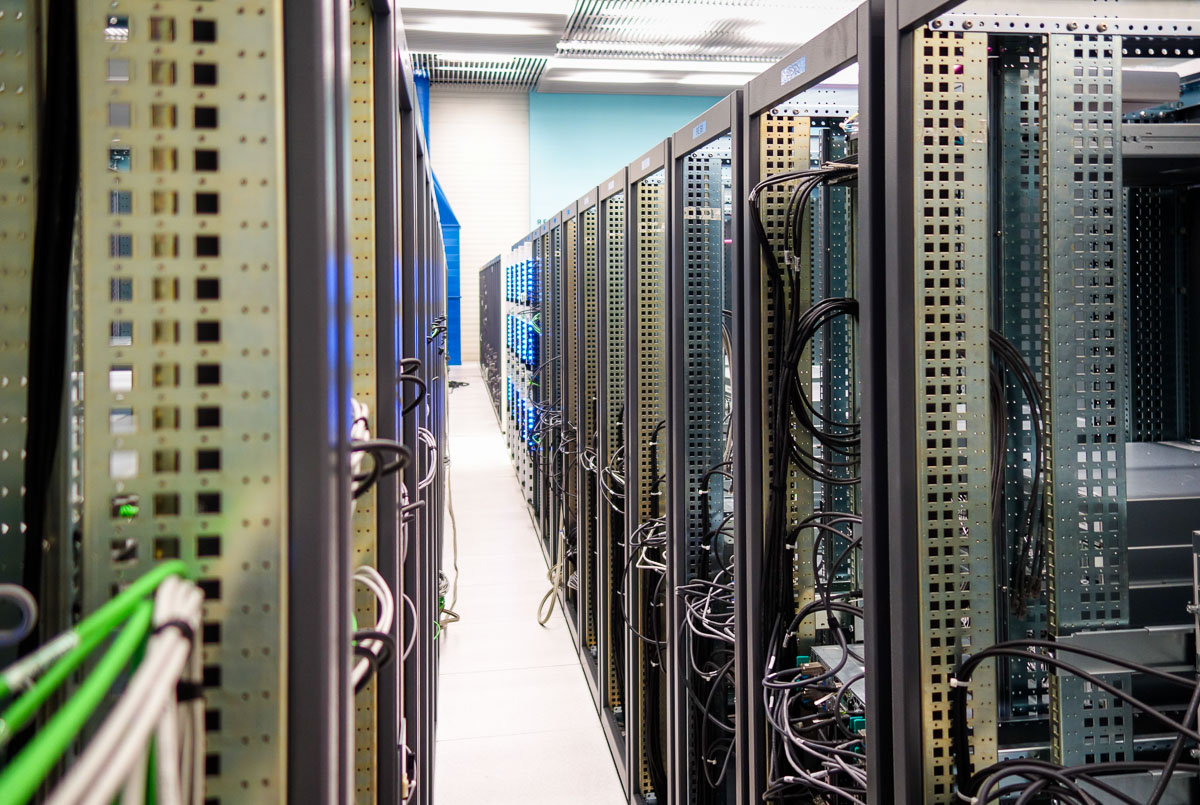 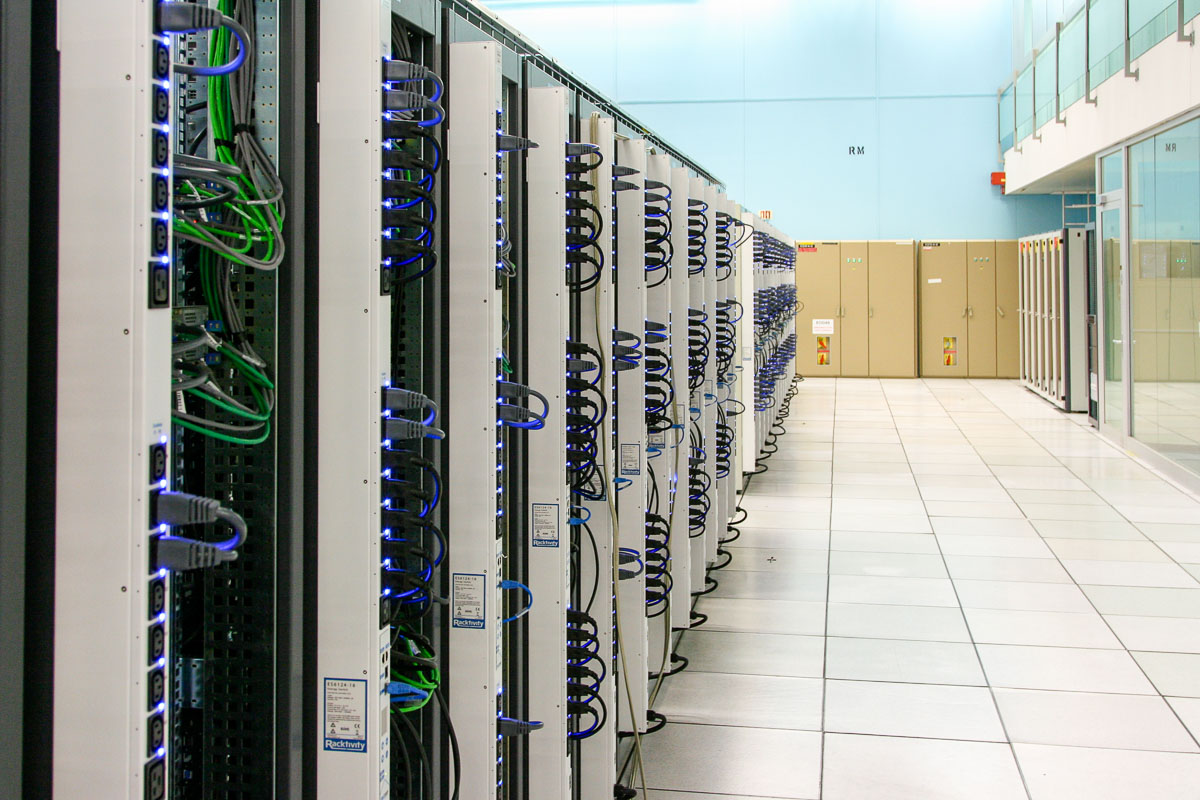 Now a bit about CERN in-jokes…

Turns out scientists are human and humorous too… Here’s some proof: 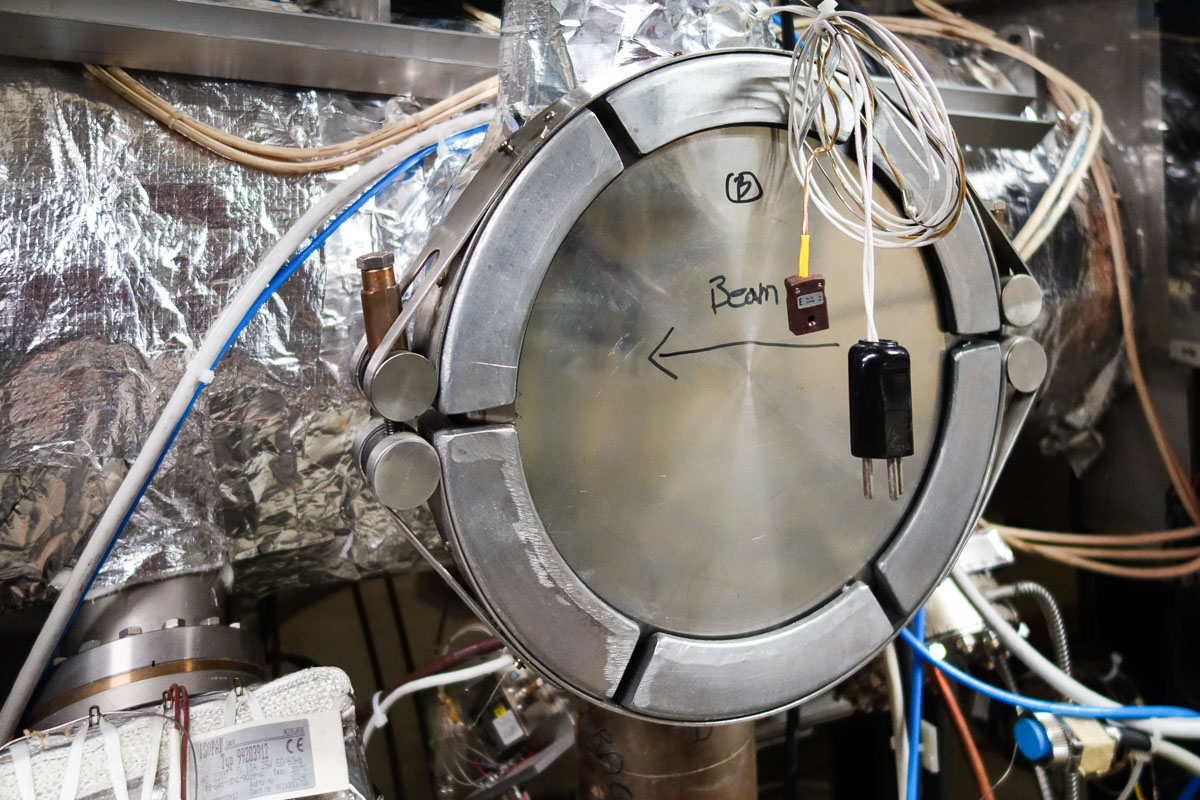 As in… ‘Beam – this way’. Just in case they get the direction wrong for the bundles of particles 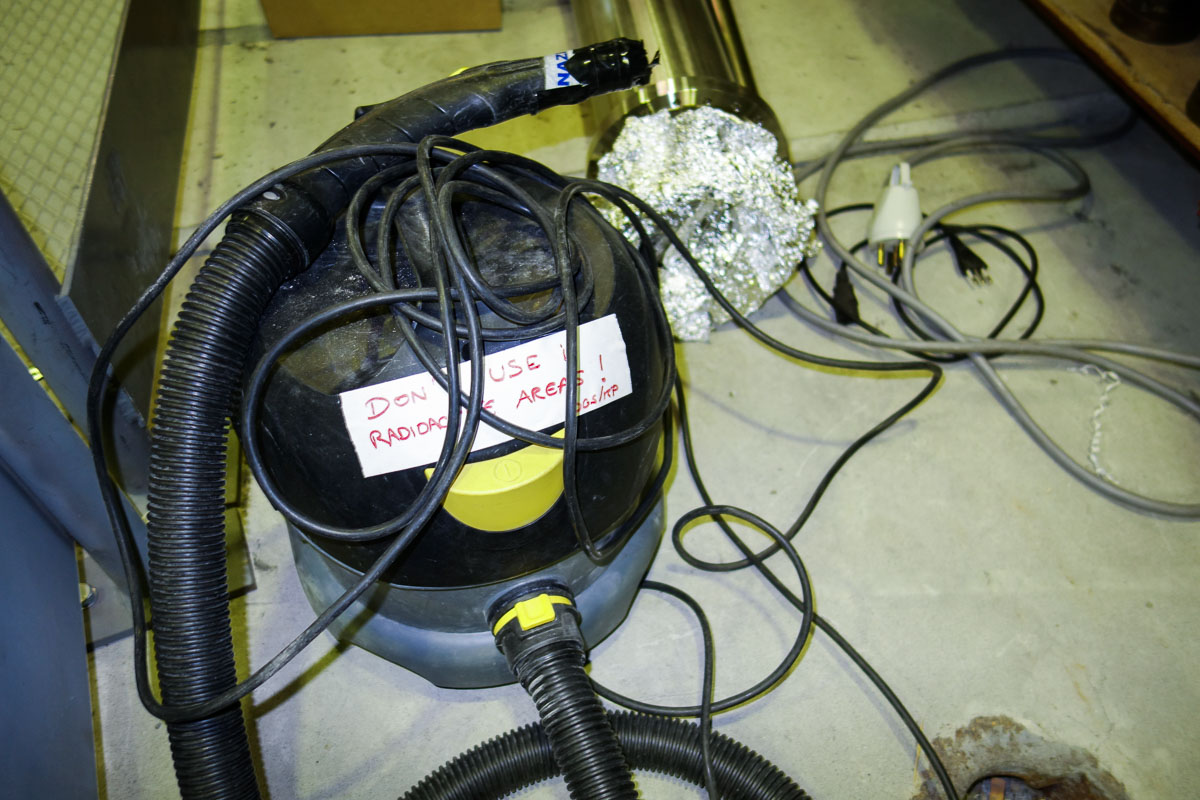 "Think like proton. Always positive". Now I know my slogan :) Kudos the team behind Super Proton Synchrotron at #CERN

Here is a house where it all happened #CERN

Antimatter? Blimey. That’s verging on the scary. The dream material of cosmonauts and the military. You can see why: 1 gram of antimatter + 1 gram of matter = as much bang as a decent sized atomic bomb.

But it’s not only about militarization and other scary negativity.

Ok, the weapons of the future are invented here, but so too are new sources of energy of the future. And I’m sure there’ll be other useful and positive stuff invented here too – by mistake, as so often happens when conducting scientific experiments. Looking for one thing, they come across something totally different and unexpected that’s more valuable than the first thing. Positive side effects. A bit like penicillin :).

Above the hangar I saw birds flying about. They must be anti-birds, I thought. And the cat I saw – clearly an anti-cat.

What else to report of a positive nature? We were kindly given a couple kilos of antimatter! Alas, they weren’t allowed on the plane – not even in the hold. 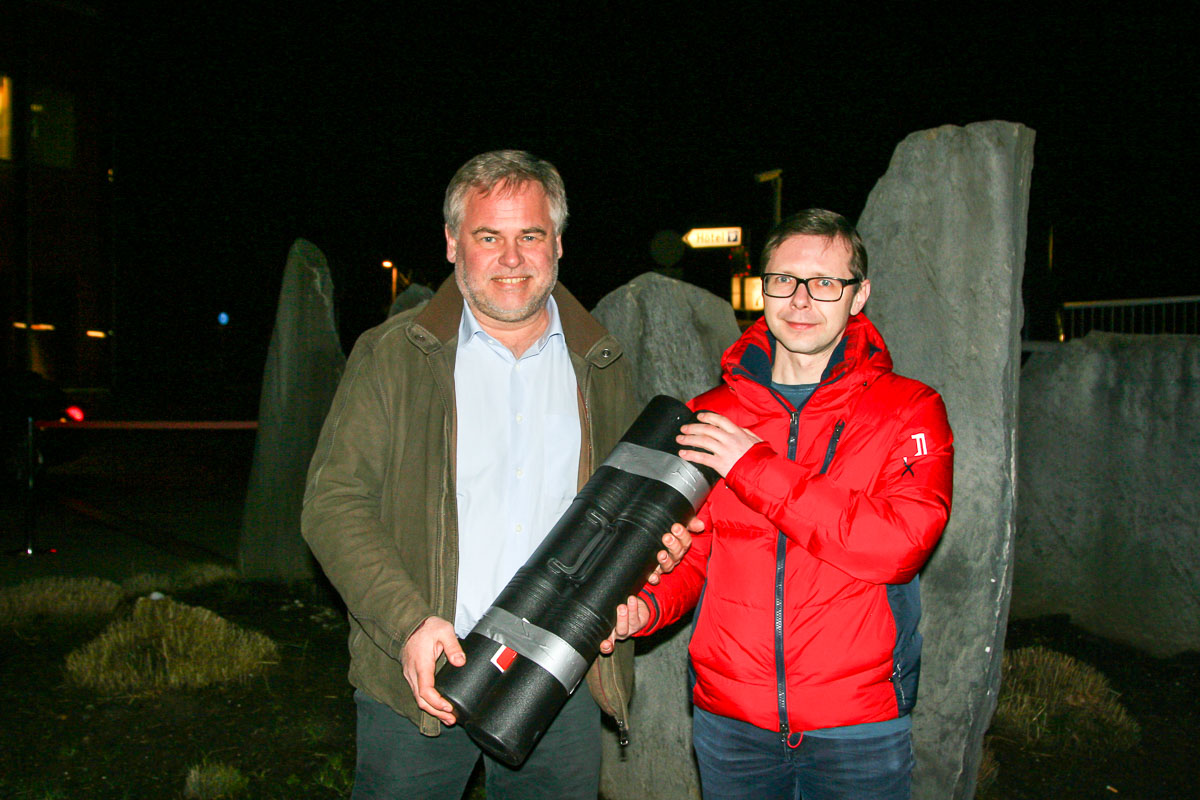 Not. In all, just five to ten antiprotons a second are registered in CERN. And if we add anti-electrons to them, then of course we get anti-hydrogen. But at such a tempo, to get one gram of anti-hydrogen would take… the lifetime of the universe.

All righty, folksies. That really is your lot re CERN and its mindboggling accelerators.