I recently discovered a most unpleasant feature of my favorite Sony RX-100: it doesn’t take pics in zero gravity! Instead, it curtly announces ‘Drop detected’ on the screen and switches itself off. But I didn’t drop it! The only thing that was dropped was the level of gravity – to zero! Sony, I know you’ve enough troubles as it is right now, but please – this issue needs addressing!! 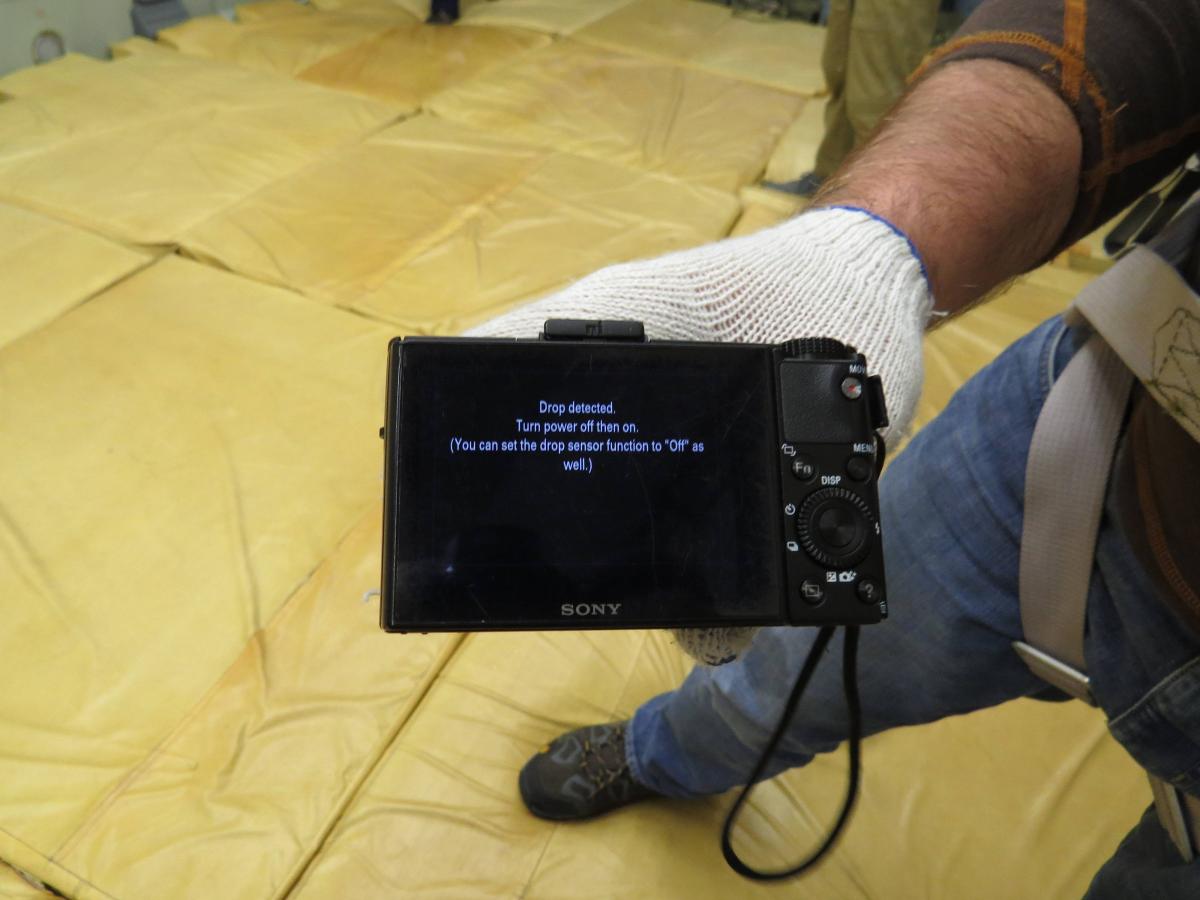 I later found out that it’s possible to turn off this ‘feature’, but in the heat of the moment, when about to enter a state of weightlessness, delving into complex multi-branch menus on your chosen piece of photographic kit is the last thing you want to be doing. But thankfully nothing was missed this time – just about everyone on this zero-gravity mission (I’ll get to the details shortly) had a camera and was happily snapping away throughout the duration…

This is my one pic of the day’s events – before my camera conked: 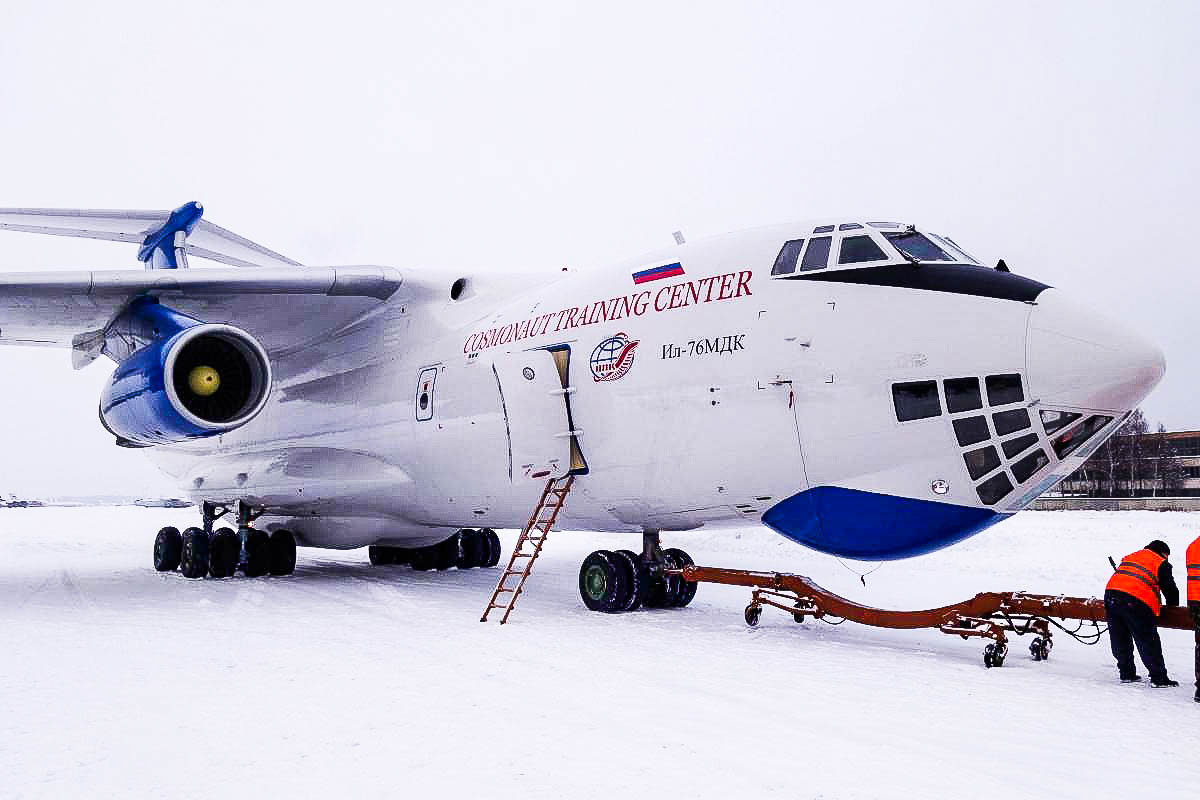 Sneak preview: we went all floating-in-the-air-like-spacemen-in-a-spaceship in this beast

Actually, it’s not quite as exotic and out-of-reach as you might at first think. Let me show you by way of a mini experiment…

Get up from your chair right now and jump up and down. 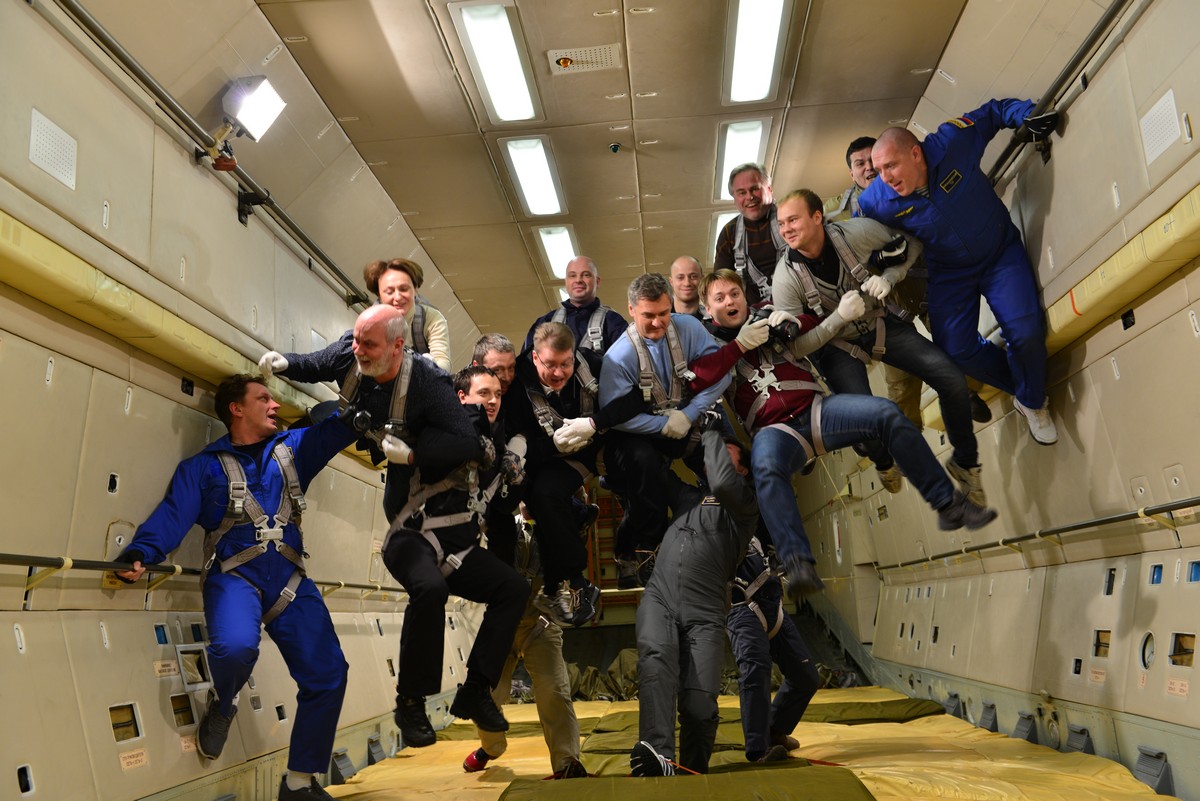 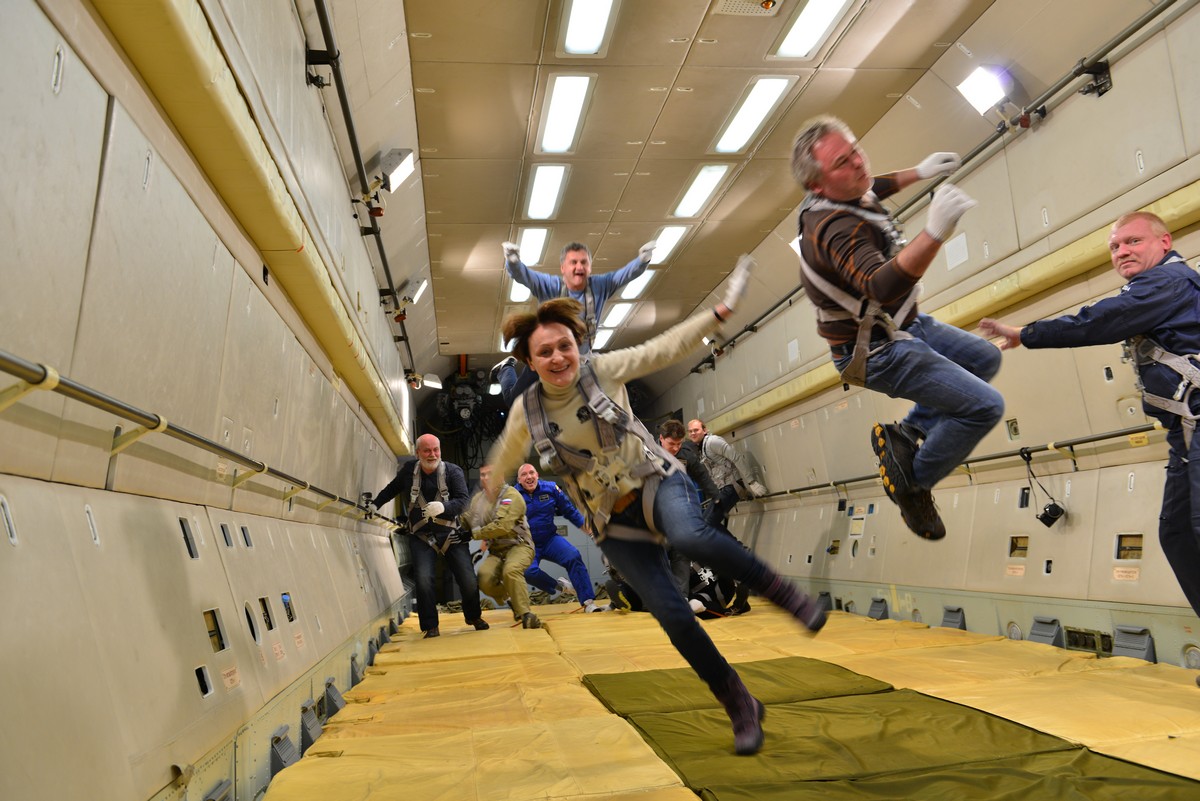 But full weightlessness…? Maybe parachutists get to feel it? Or base jumpers? Nope – they’ve got all that wind in their faces. Divers? That’s getting nearer weightlessness, but they’ve still got flippers to control their movements, whereas with full weightlessness – well, there’s nothing to hold onto or direct your movement…

Full weightlessness is of course what you get in space, or in a space simulator – which is what we tried out.

As you’ll have figured from the pics already, it was an insanely enjoyable experience. It was just mind-blowing. One of the first things that struck me was how we all take gravity for granted. But suddenly take it away and BANG. OMG. One’s whole reality turned upside down, literally!!!

So, we all piled into the IL-76, and off we flew to… somewhere or other.

This beast sure takes its time to gain altitude – a good 20 minutes until it flattens out. That’s when we took off our – original! – parachutes (with instructions from the 1960s!), just like you take off your safety belt on a normal plane after the ascent. 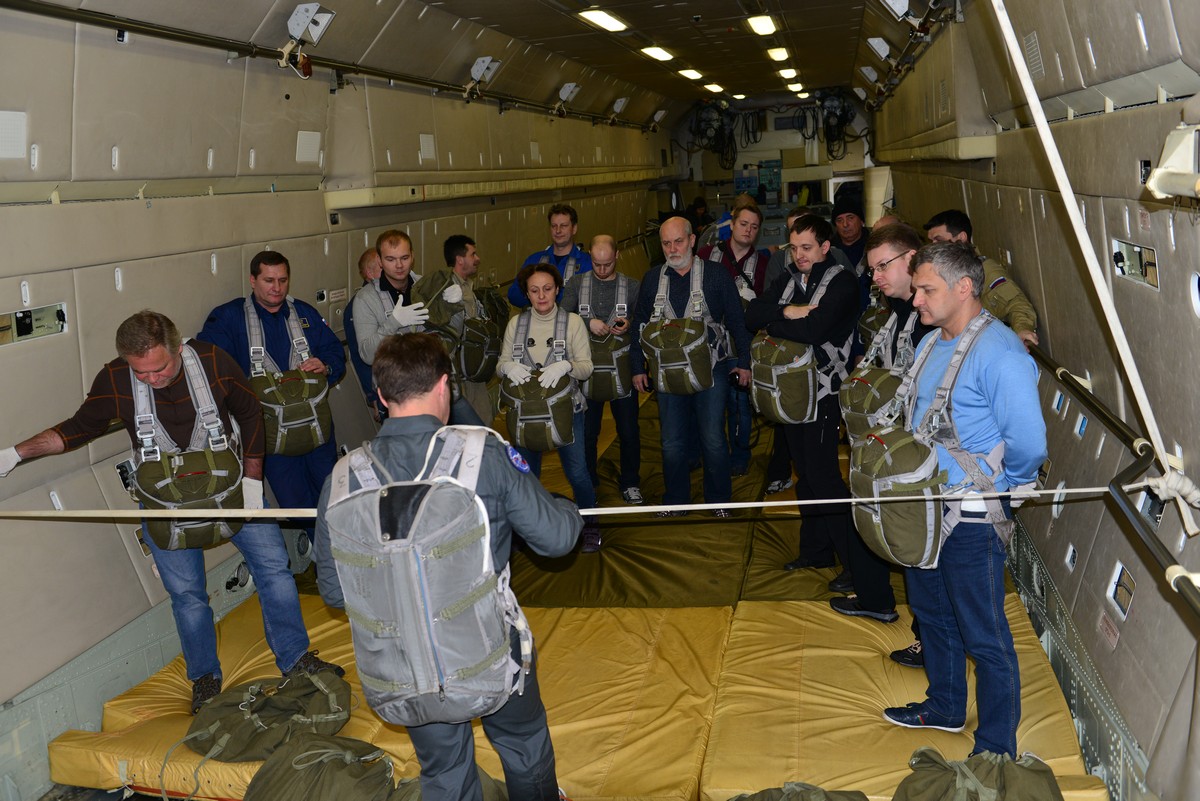 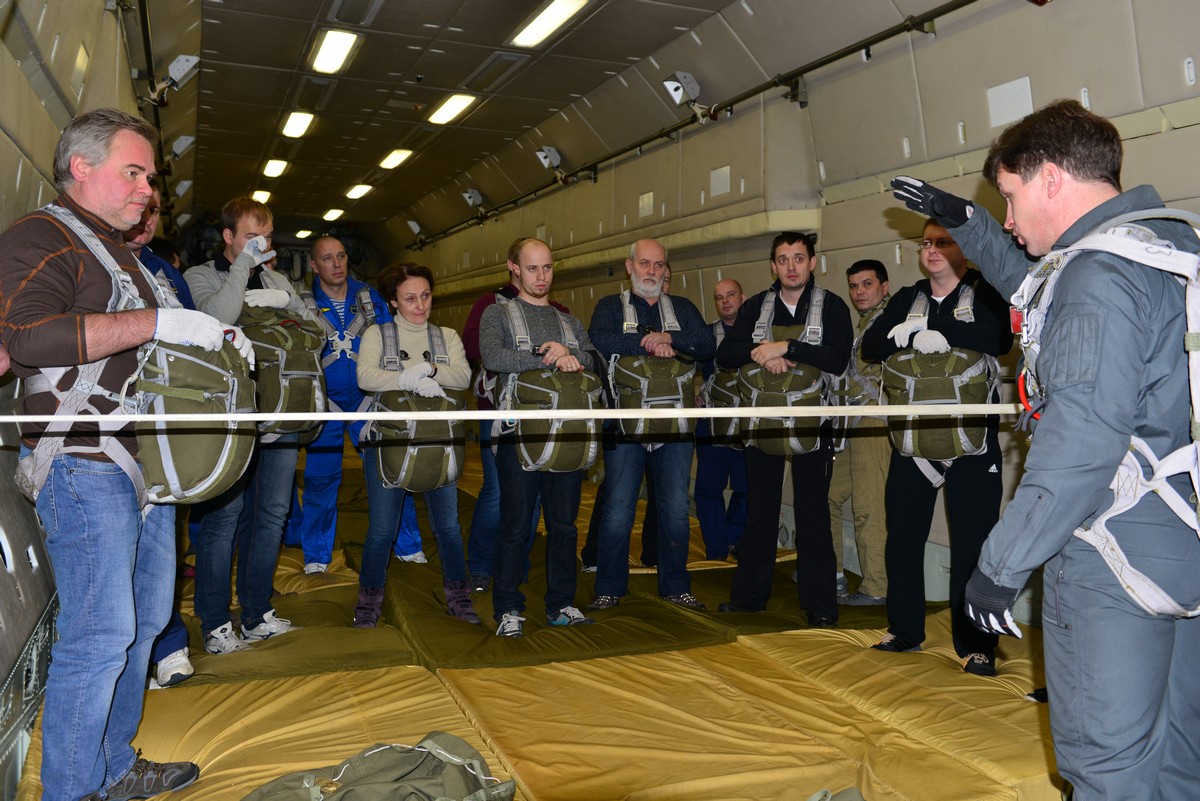 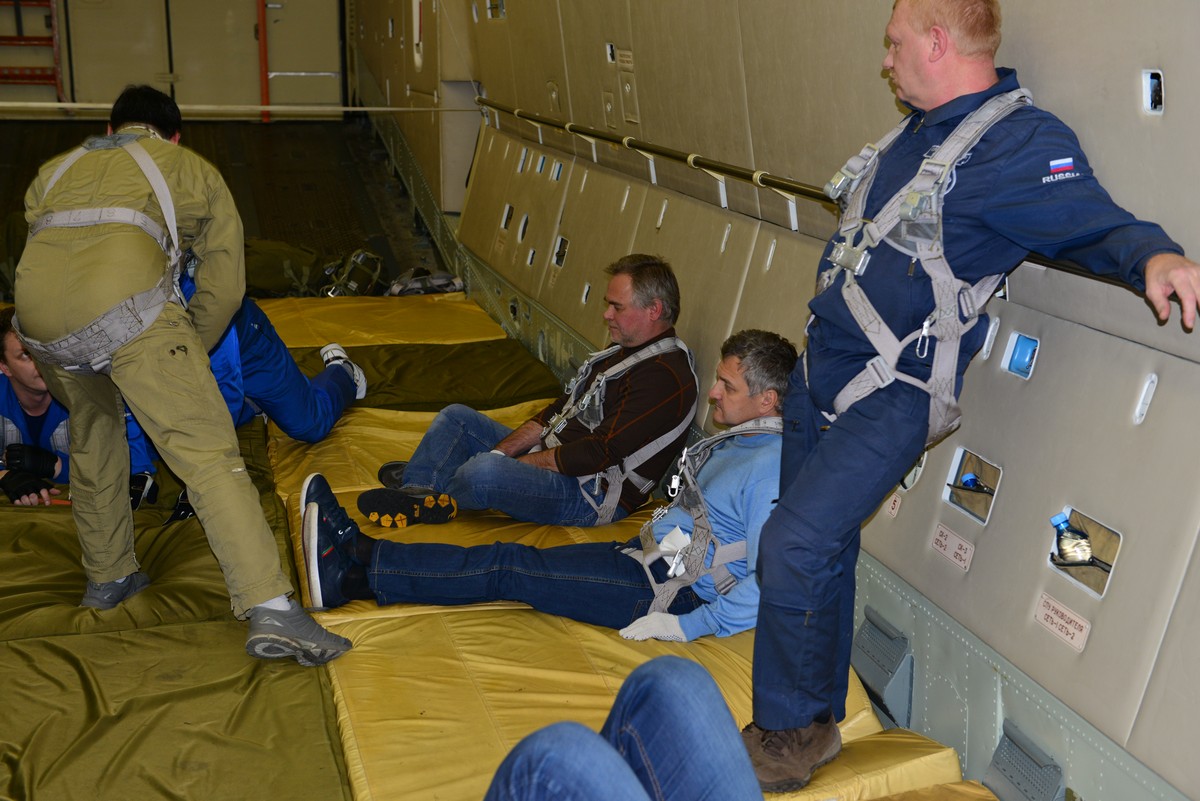 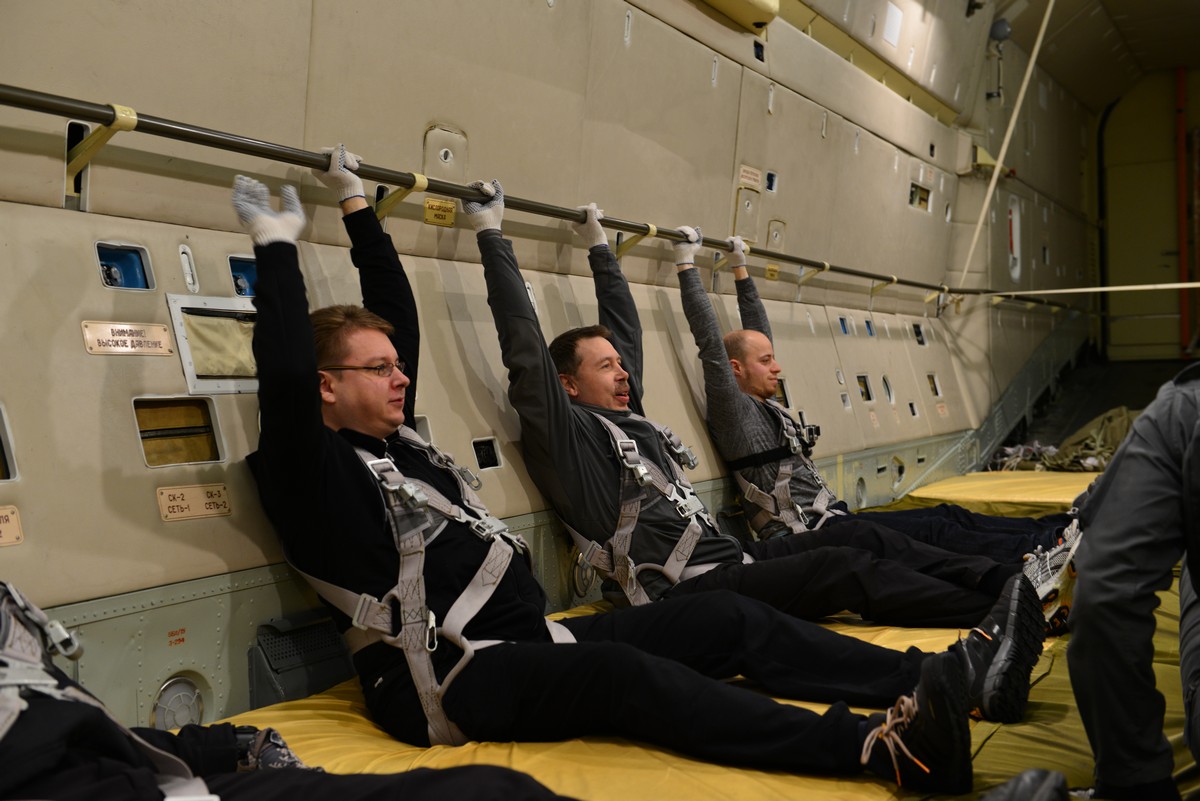 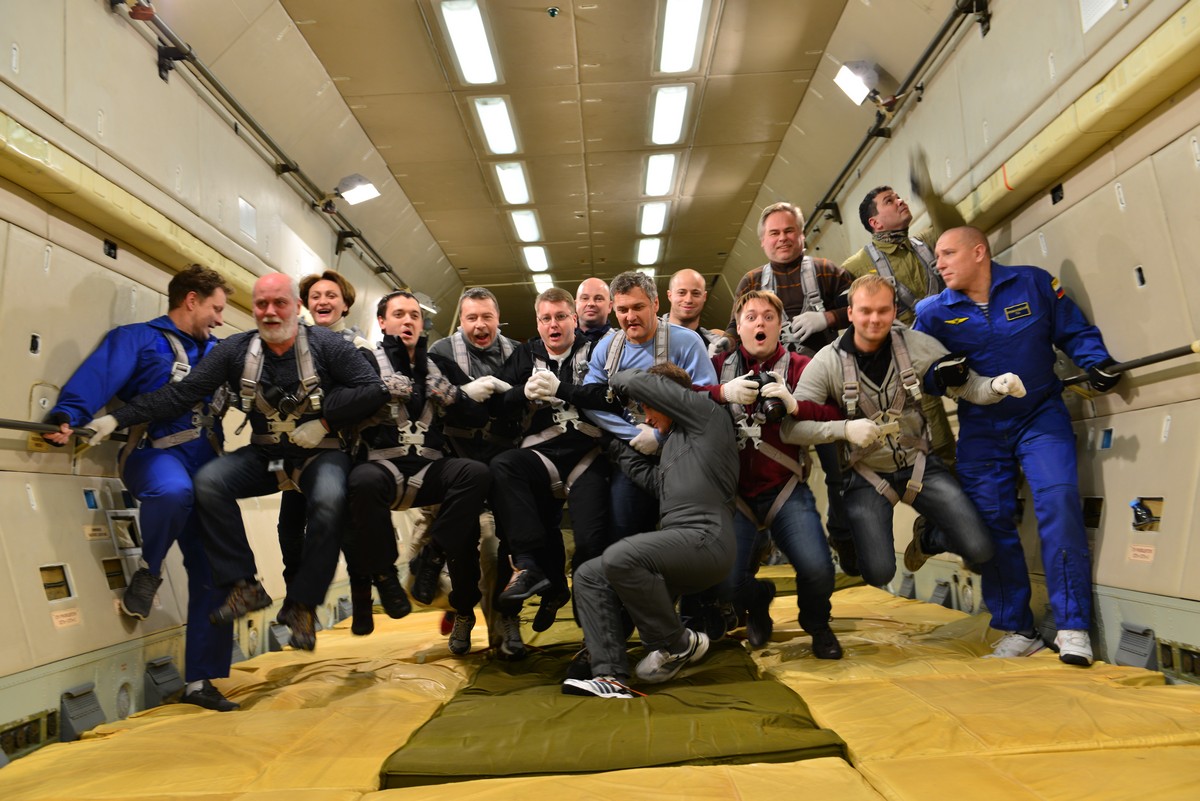 Love the different reactions on faces… 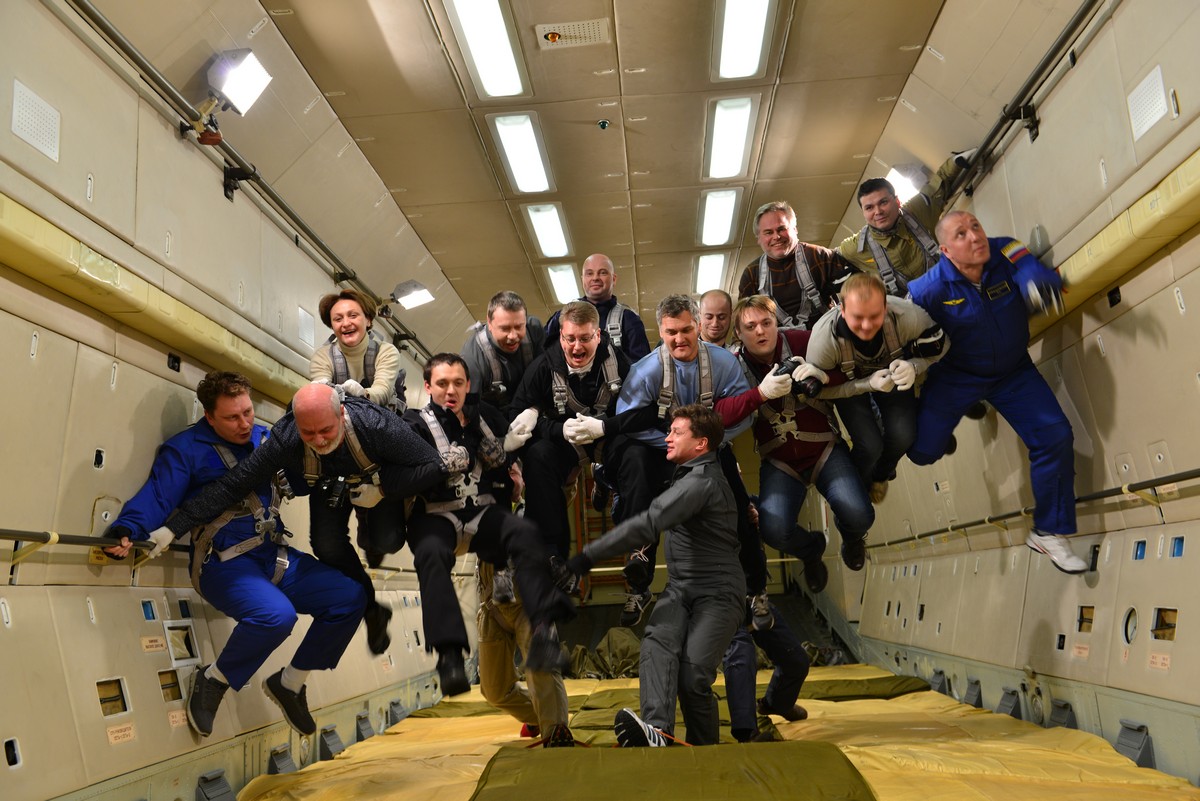 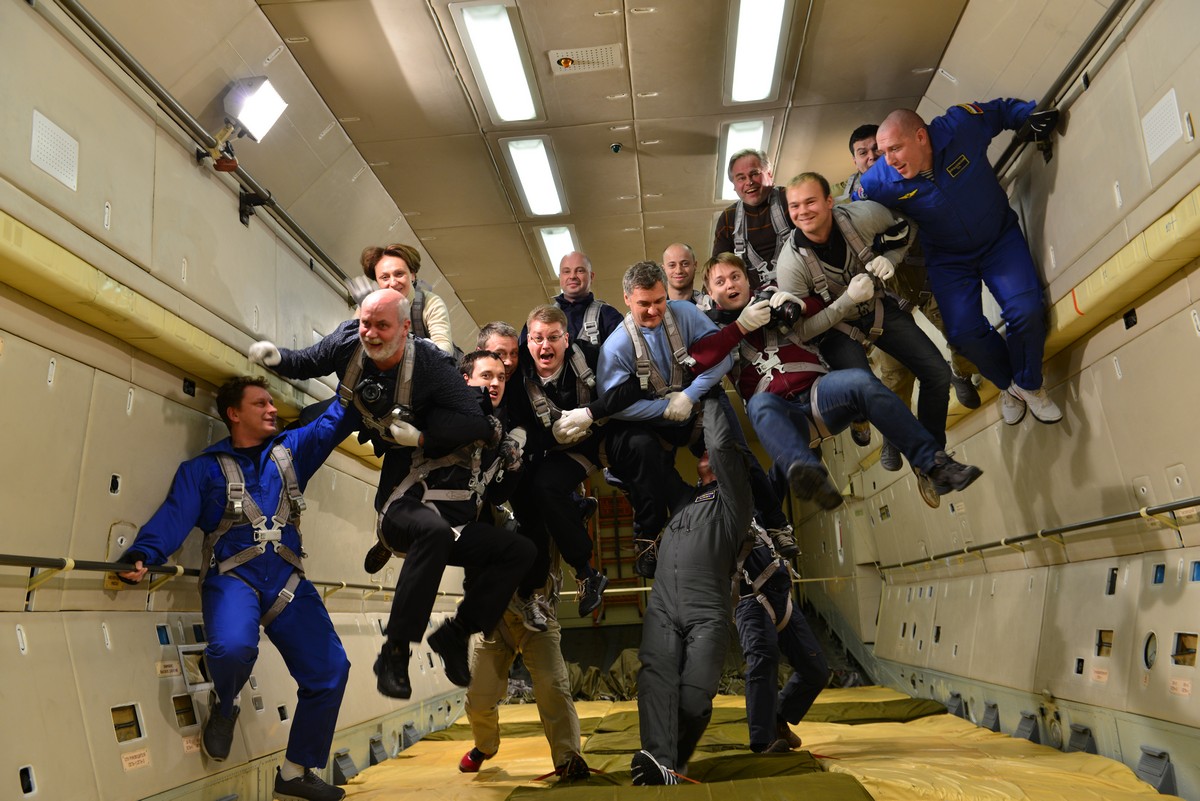 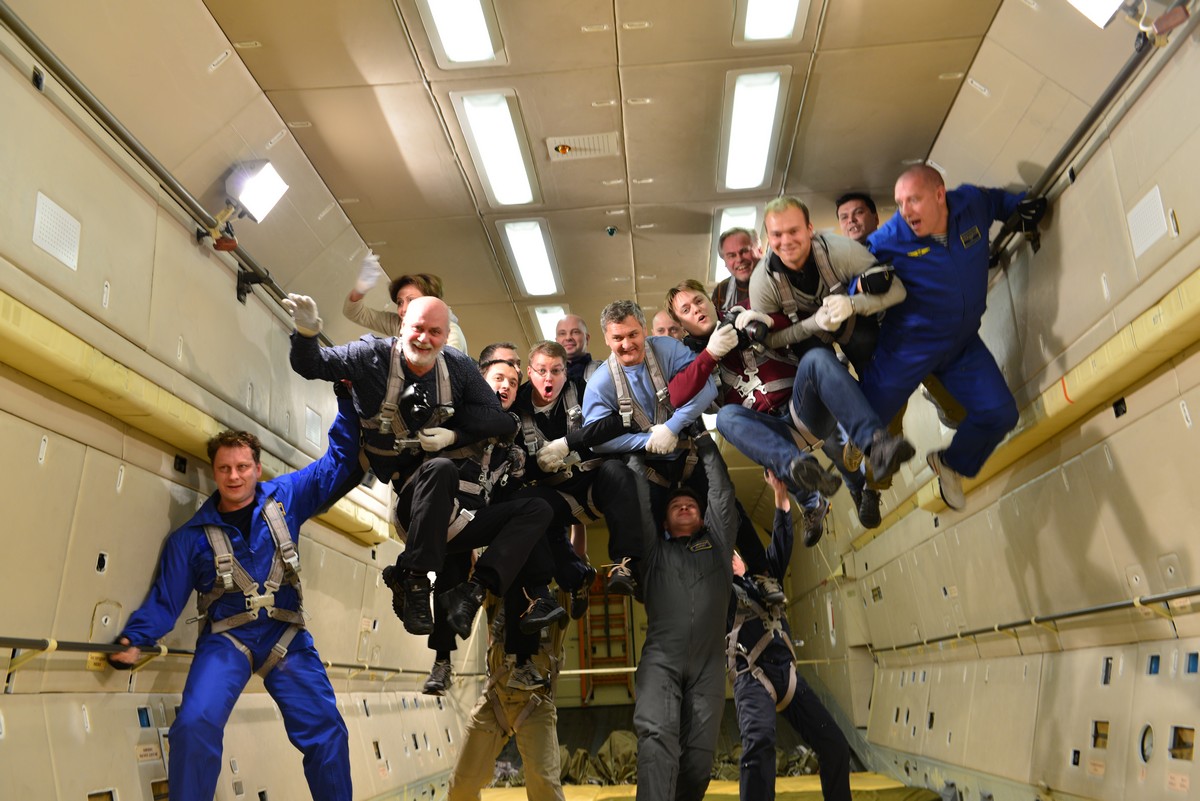 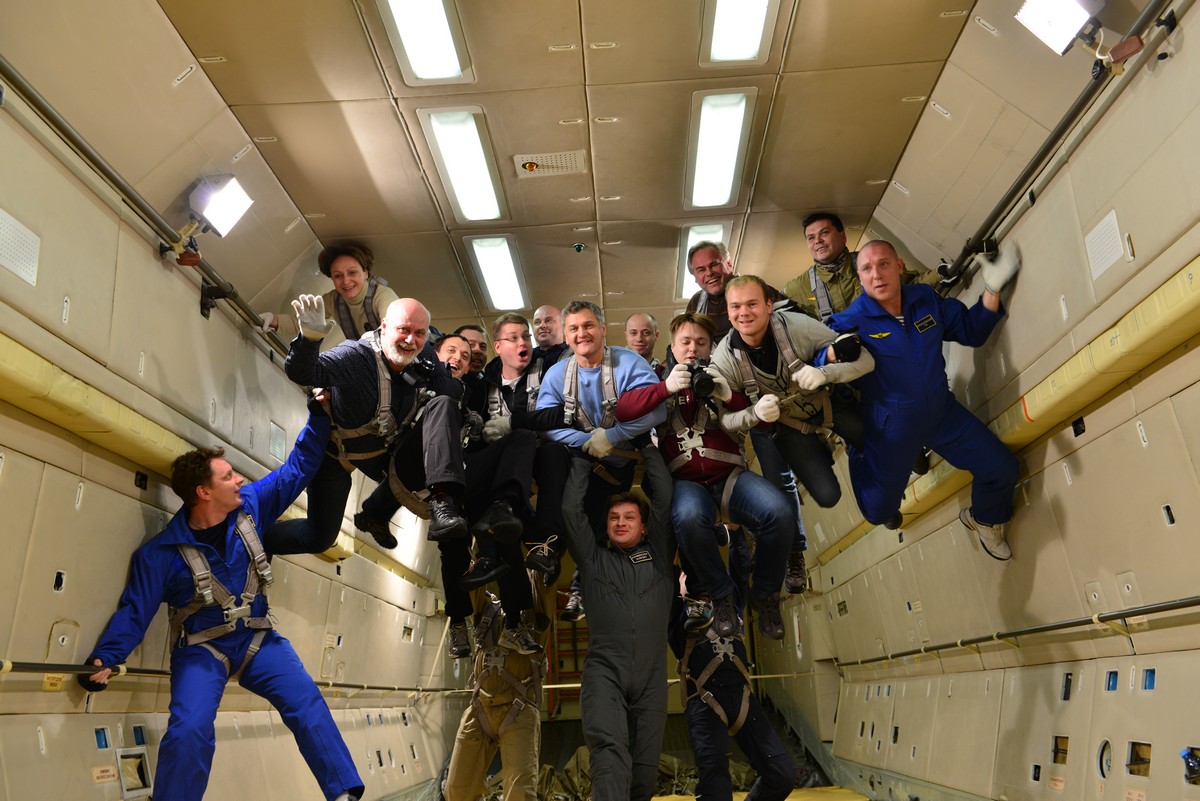 At first, the flight resembles one on a regular civil airliner – just without the seats or stewardesses or complementary drinks. Things go sharply non-regular when you first hear a stern voice announcing through the audio system that it’s time for ‘regime test-run’. Getting a little afraid at this point is certainly possible, and probably healthy. But what’s there to be afraid of? Well, that’s just it – like any good horror flick: the unknown!!

‘Regime test-run’ is a warm-up – before going for the complete weightlessness regime. For this the Ilyushin makes a maneuver to give us a taste of 2 g. Basically, the plane performs a jump. 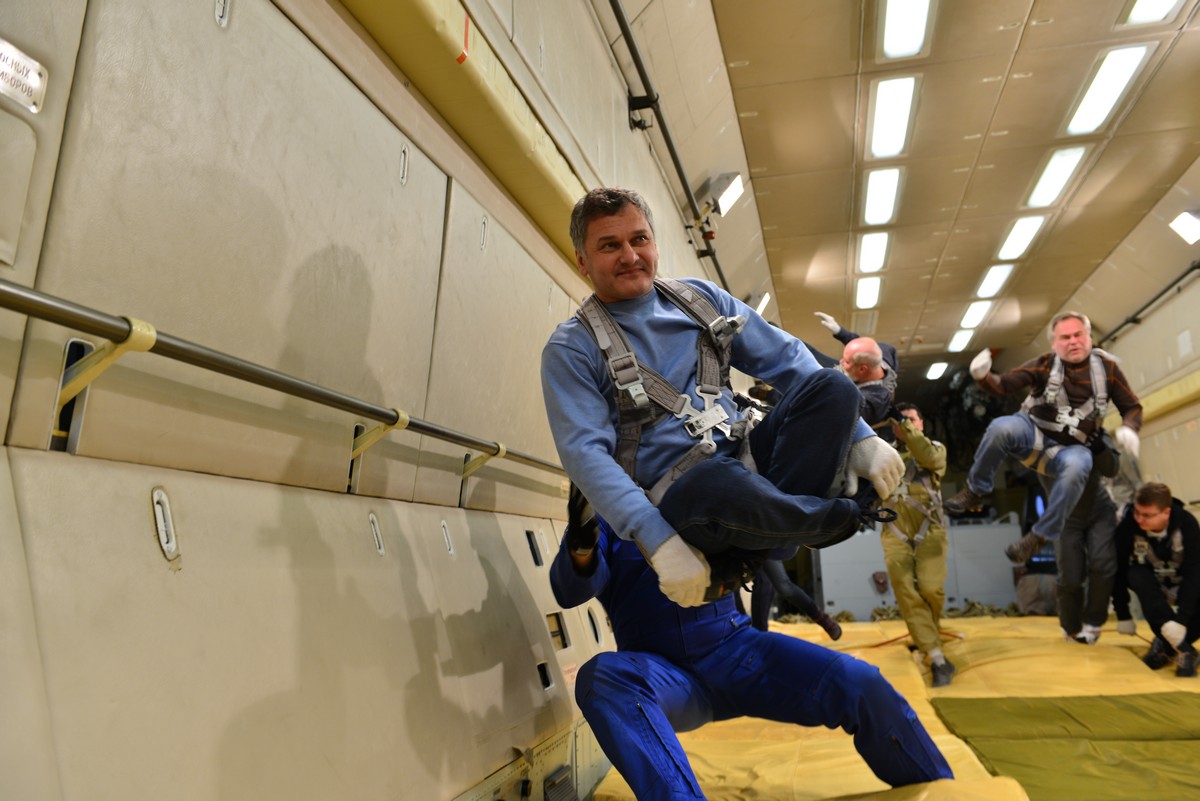 Remarkable composure. The lotus position clearly having its effect 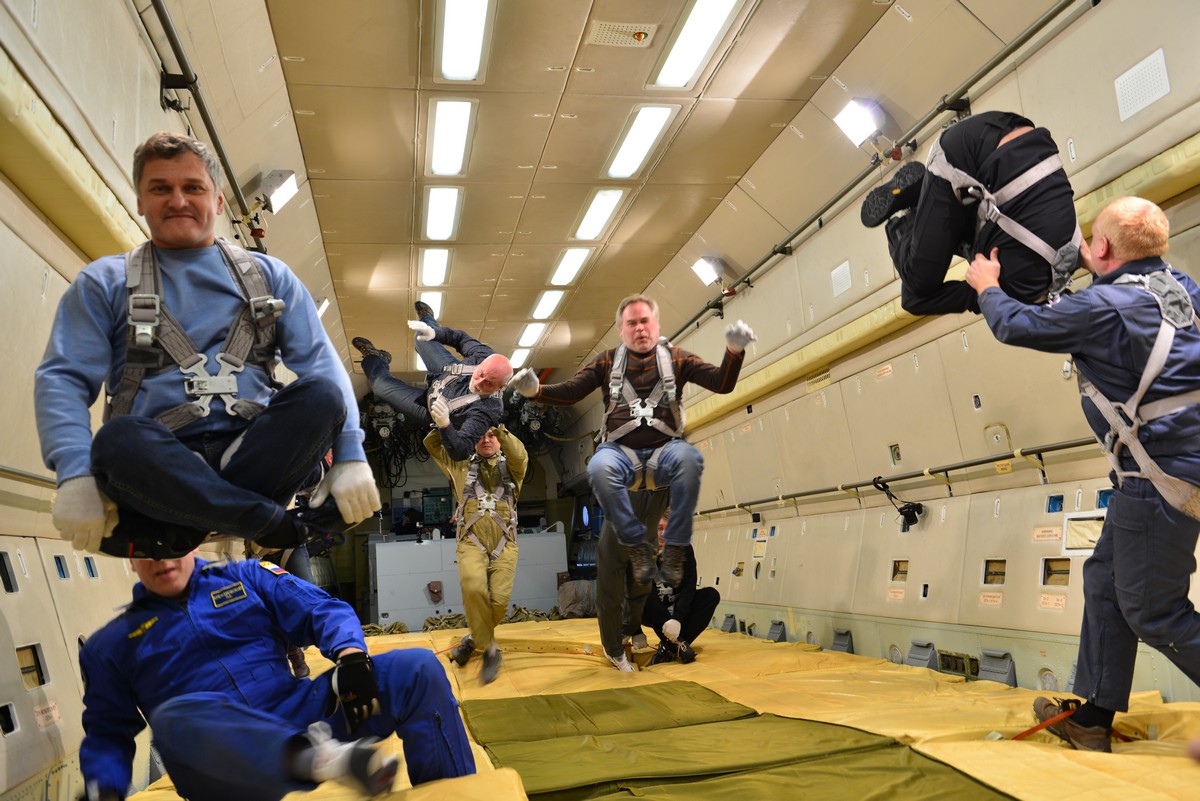 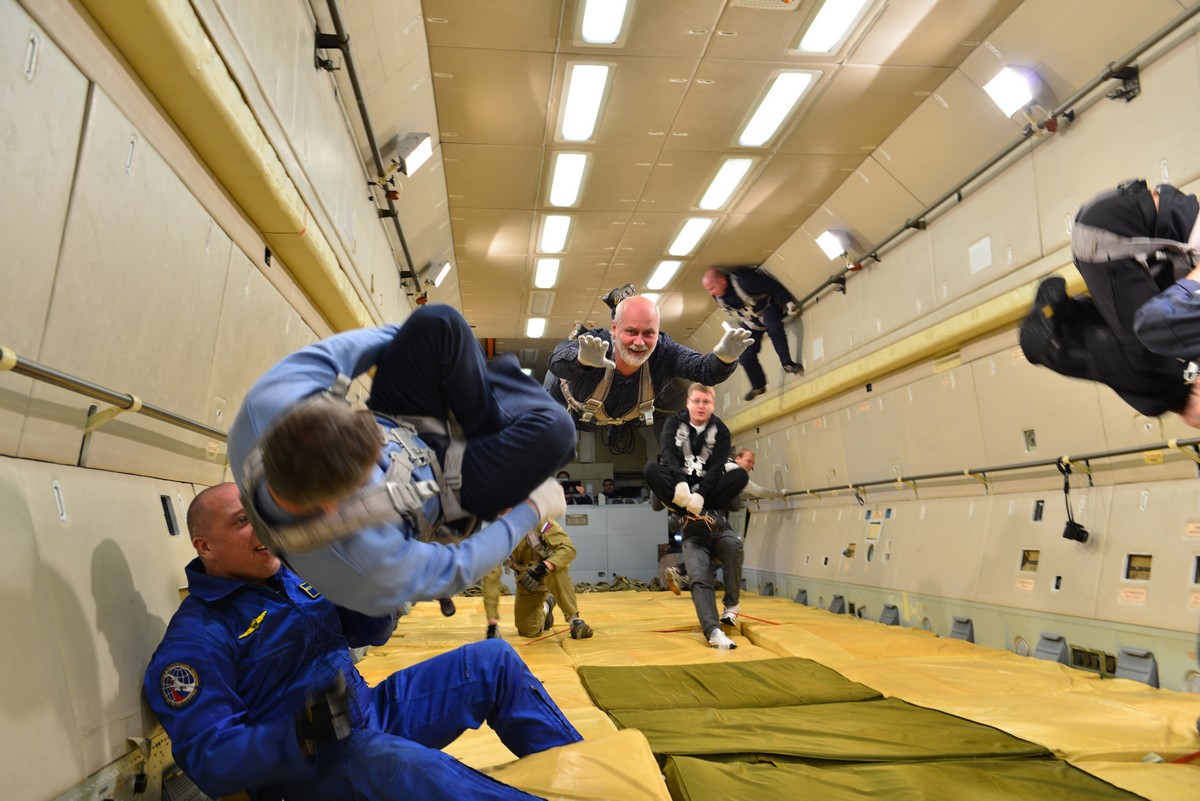 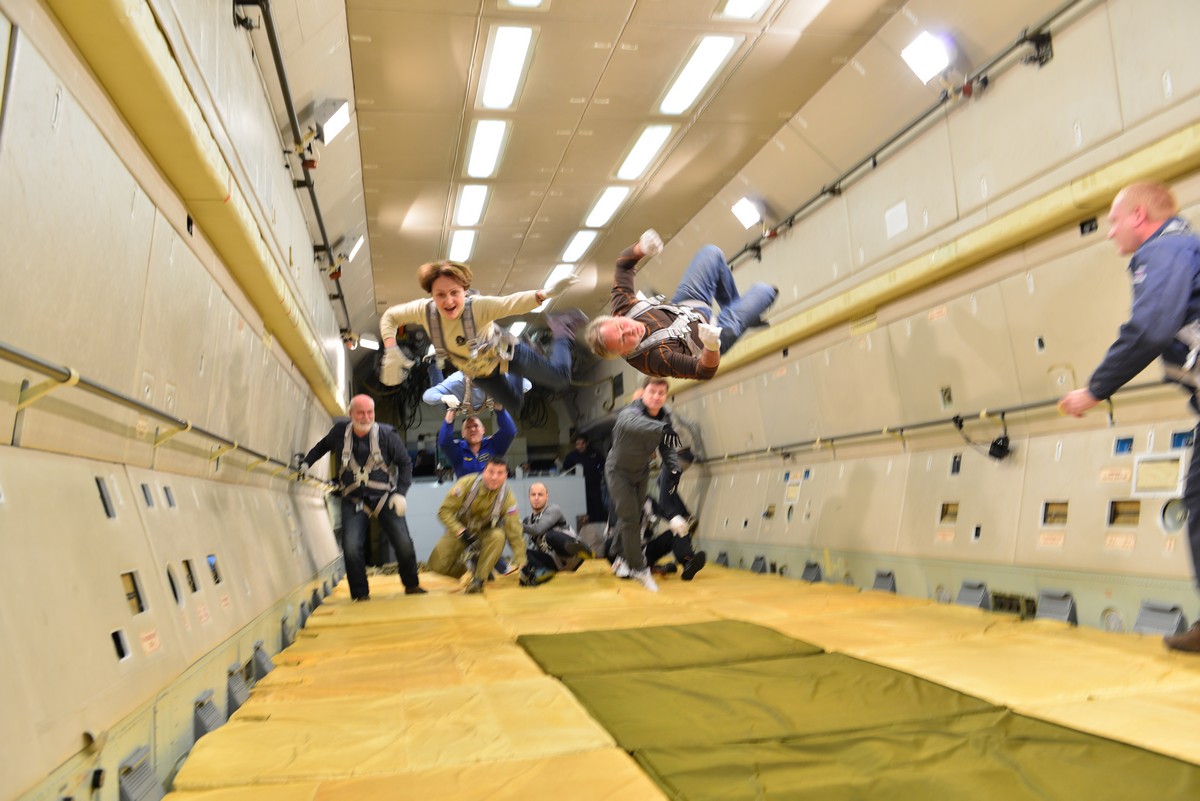 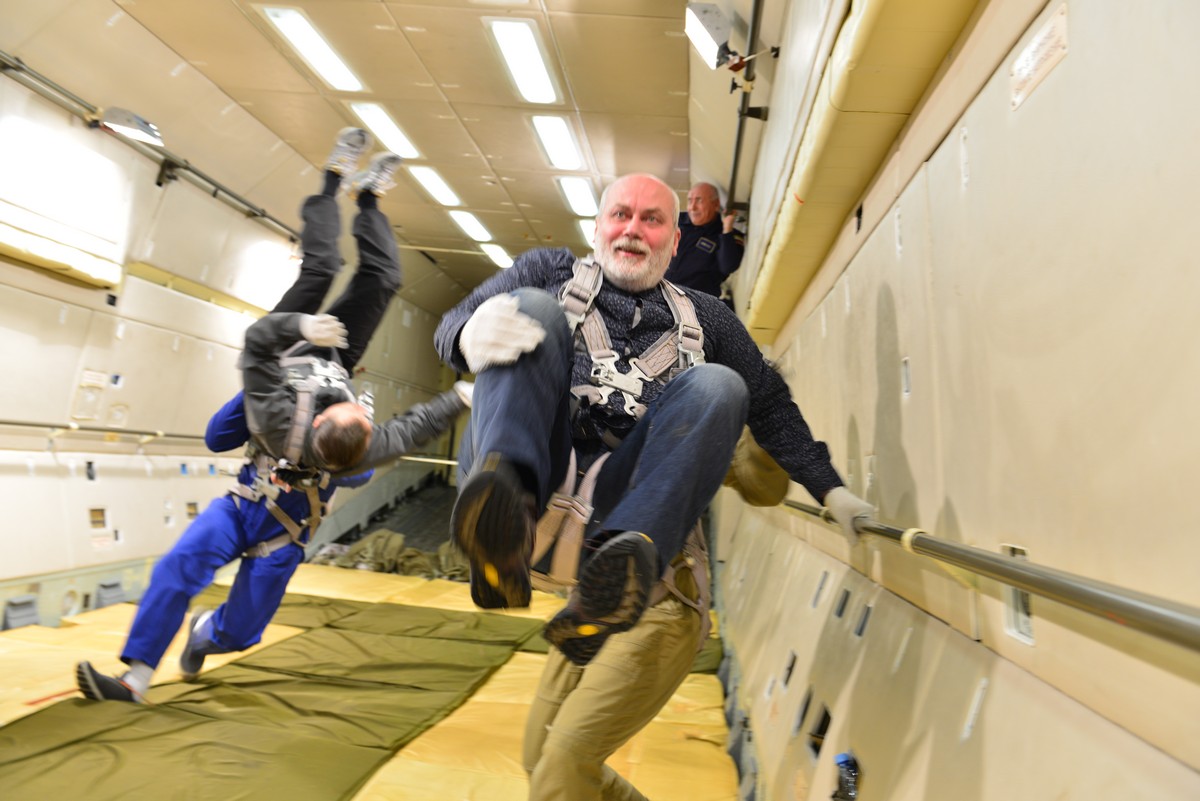 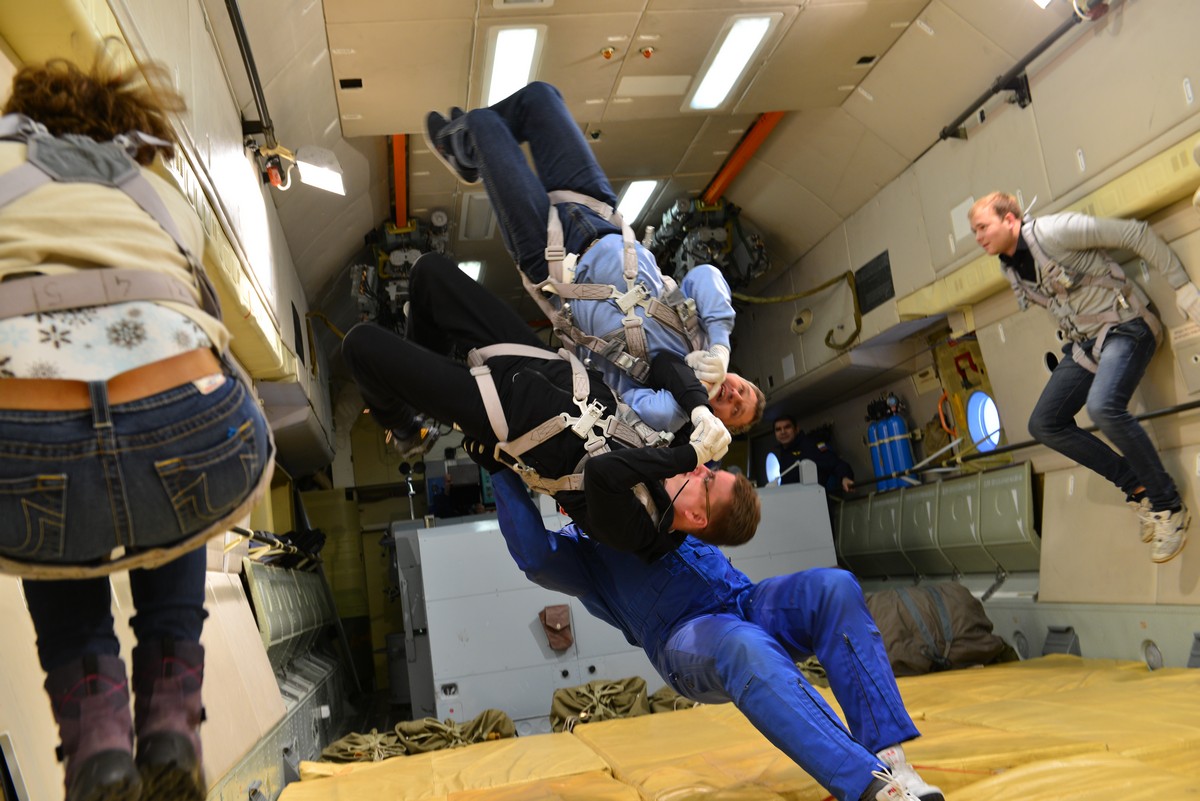 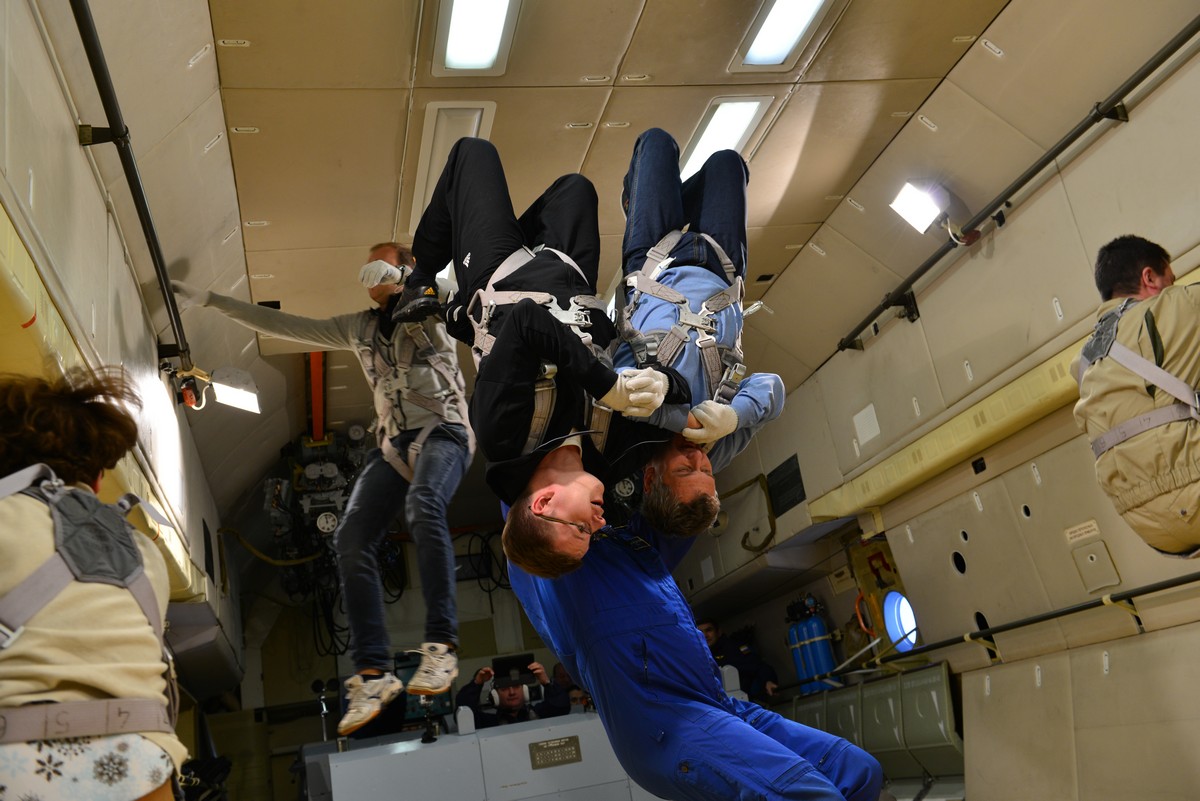 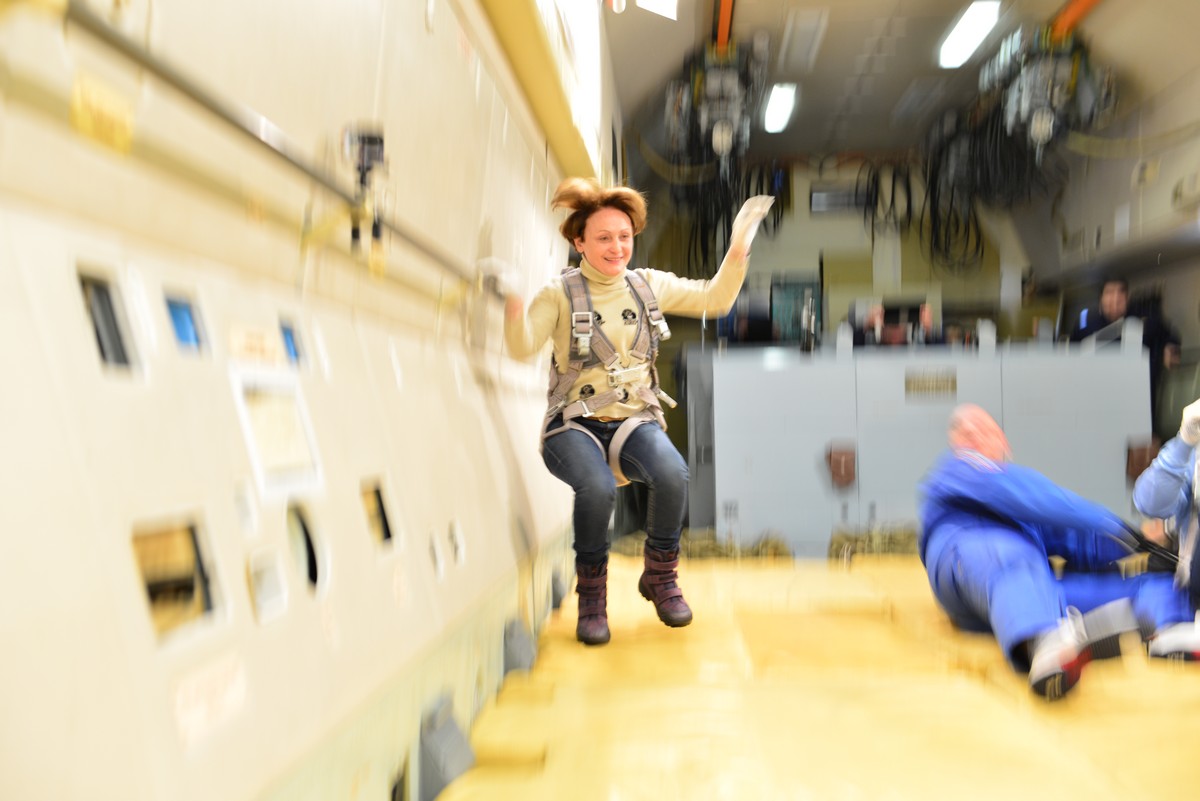 Zero gravity experience. It's not easy to tolerate 2G-load (10 times!) but the joy you feel afterwards is an absolute happiness!

What can I say. There’s nothing like it. Just crazy. I think if you watch the video you’ll agree:

I think the best way to describe it is ‘utterly disorientating’. Direction; movement; up, down, across – all of it rendered meaningless. No weight… soon you’ll have no mind either – as it will be so blown!

Then “20 seconds” is heard over the Tannoy. What? Already? Boo! Then an instructor gets a hold of you to guide you carefully so you don’t return to normal gravity with a bump. 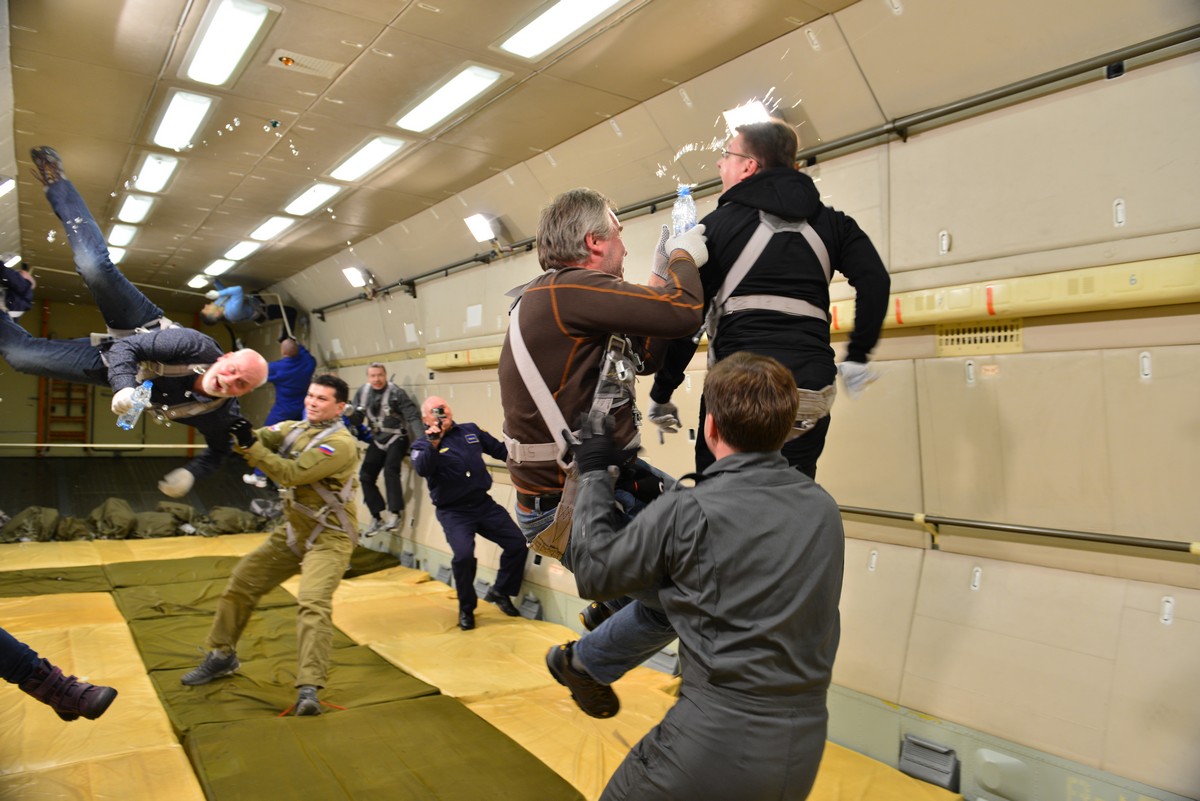 Then we return back to normal – 1 g. But not for long…

Again the voice – “get ready!” And it’s 2 g once more! No standing this time. Best to lie down – and that includes your head lying down on the soft matting too.

And then it’s all over. Done and dusted. I’m not sure I’m coming or going, or whether I’m relieved or sad it’s all finished. A very weird limbo…

I thought it was over – but no: Here we go again!… Bright lights come on, that voice again barking “Regime!”, and weeeeeeeeeeeeeeeeeeeeeh! 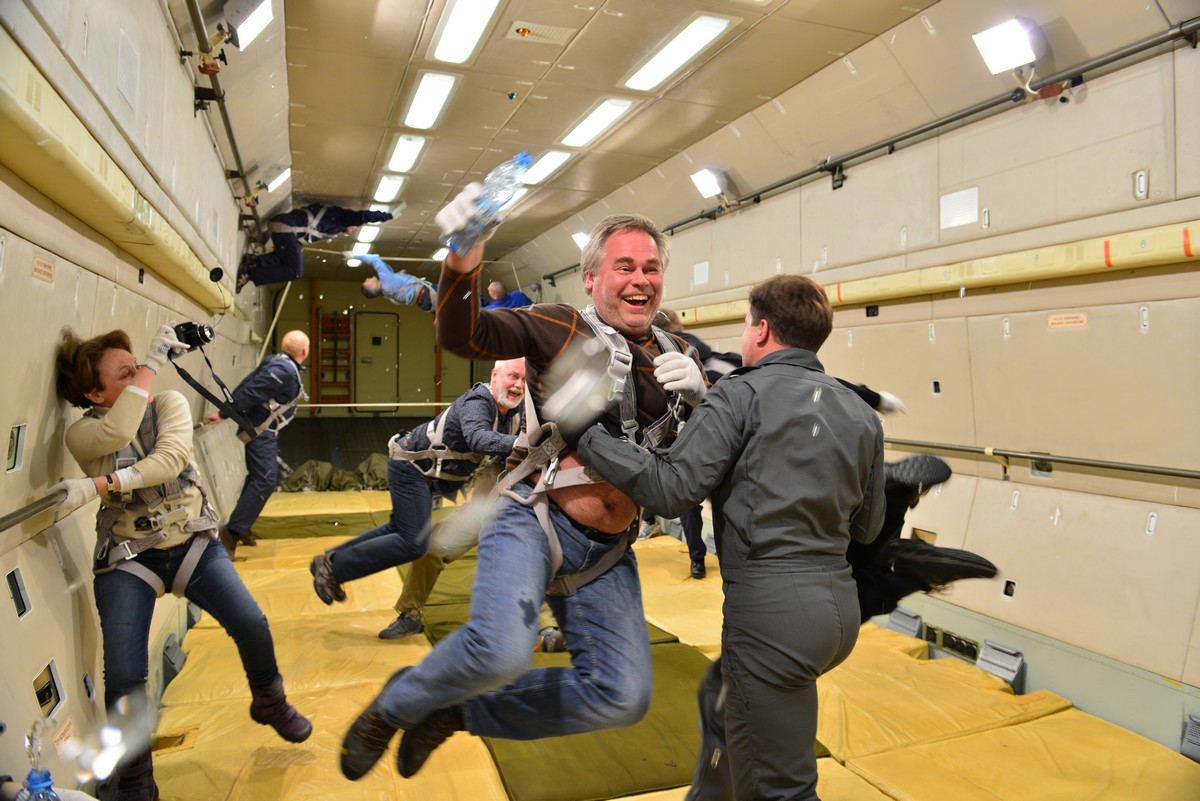 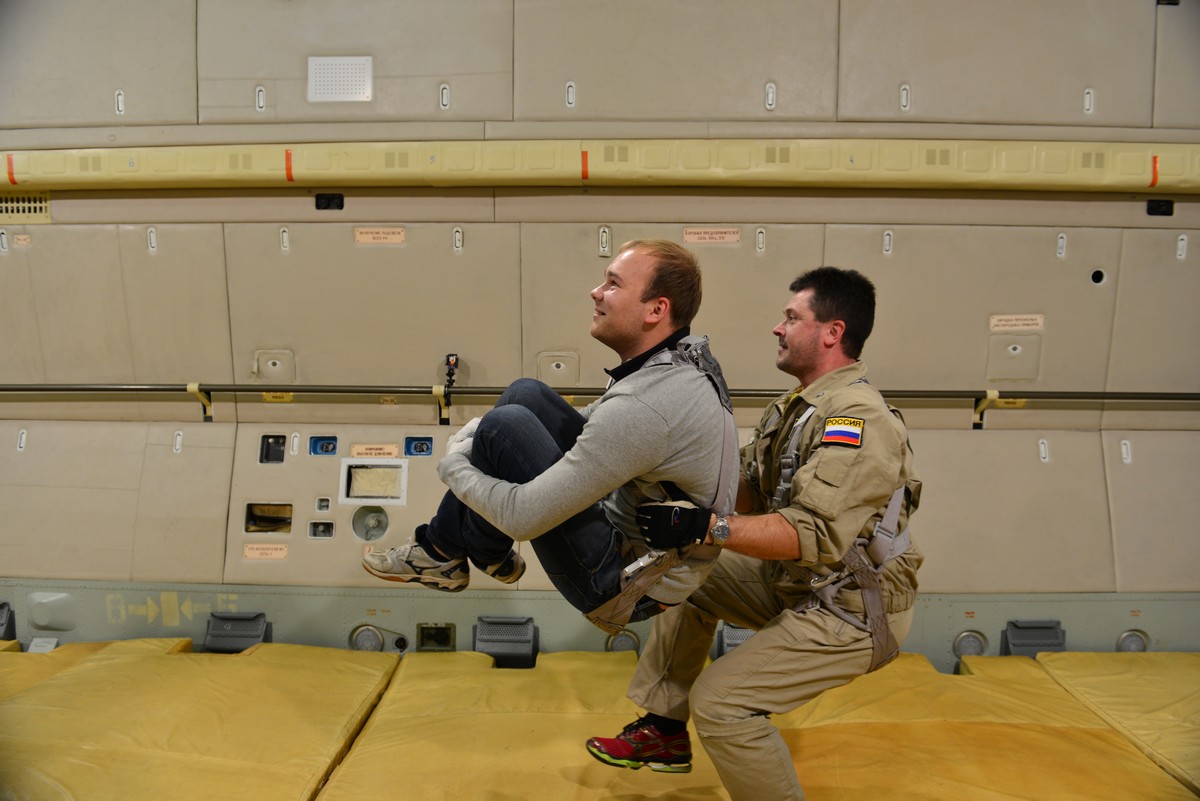 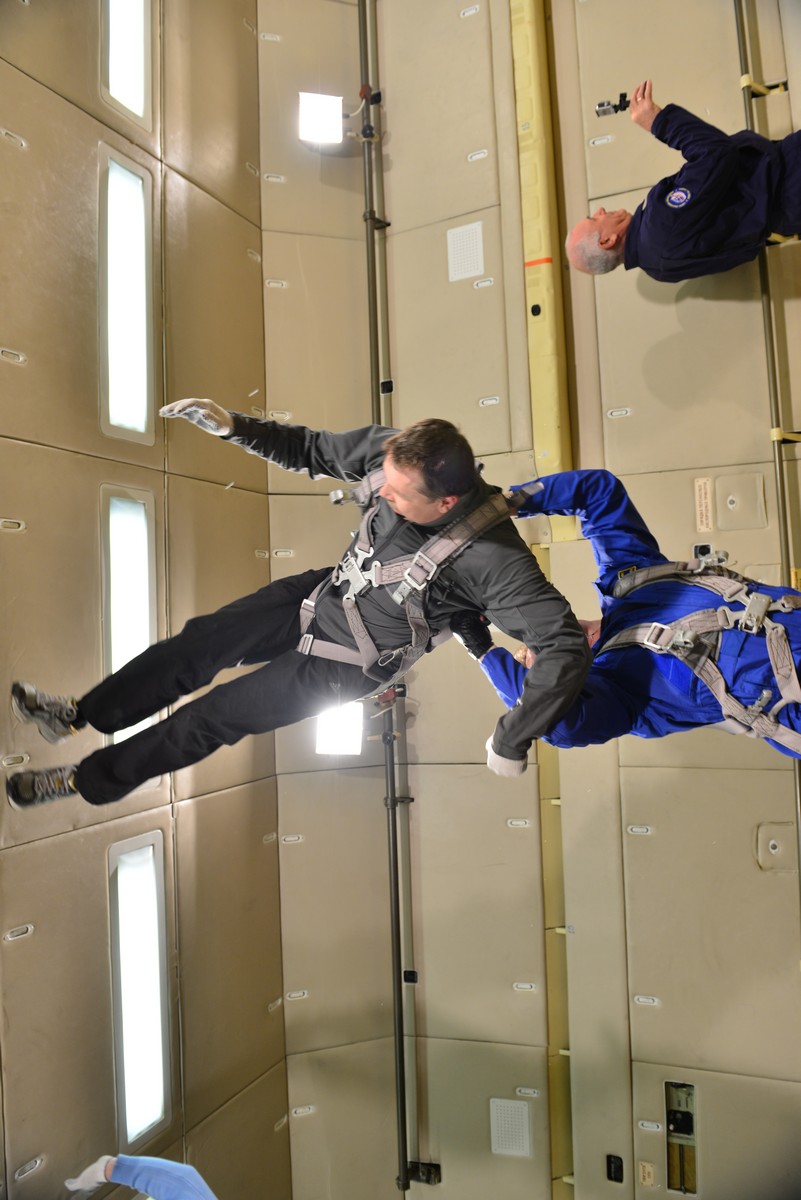 In all, that routine’s repeated 10 times.

Ten circuits in all… I think 15 would have been ideal personally; others would beg to differ! Around a fifth of our group didn’t manage al 10 circuits. They quietly exited the main chamber and… threw up in the medical compartment (in armchairs designed specially for such contingencies:)!

So, overall, as you’ll have gathered, I liked very much. If I’d recommend or not… that’s a tricky one – for you’ll either really like it or really not like it. For sure you’ll not be somewhere in the middle and indifferent. You’ll just have to give it a try and see…

Where? On your nearest Vomit Comet, of course!