Every day we release up to 2000 updates for our products.

Every week our users around the globe download those updates over a billion times.

Every month we distribute around four petabytes of updates.

These updates (together with our other technologies) protect you against new cyberthreats. In recent years we’ve been seeing new malware popping up not just every day or every hour, but every minute and even every second! Each year we analyze more than a billion samples of malicious code.

For the average user, receiving antivirus updates is a simple, automatic process. They run silently in the background without disturbing you (and quite right too). However, there’s a lot more to an update than first meets the eye. Updates are merely the tip of a sophisticated iceberg that connects our products to a huge distributed IT system that we built up ourselves using a whole bunch of original ideas and know-how.

That’s the overall scheme. The details get more interesting… 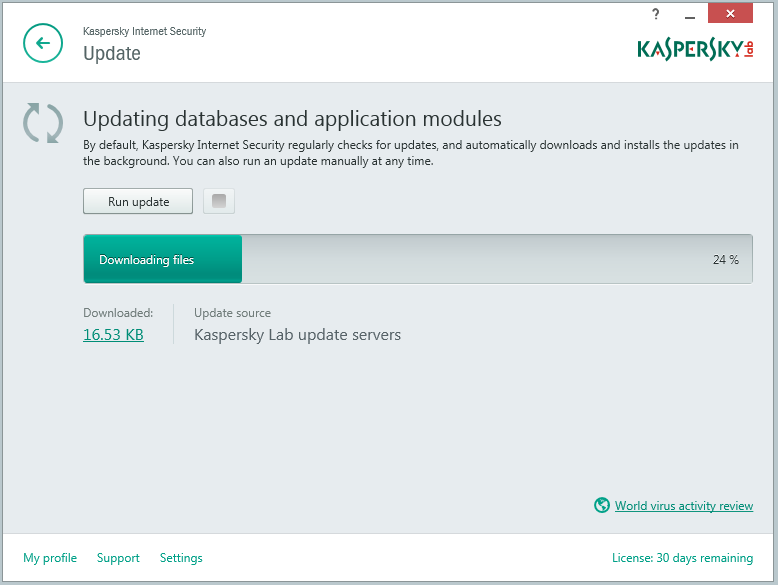 So what actually happens when you update your antivirus?

First off, the content distribution network (CDN) starts working for you. That’s our update distribution system, which we’ve been constantly improving for 15 years now. It’s made up of 60 servers in 13 countries, including Australia, China, France, Germany, Japan, Russia, the UK and the USA.

Stage one is choosing the best source for updates.

The CDN connects the product requiring an update with the most suitable of the 60 servers. ‘Most suitable’ normally means the nearest, but if the nearest is busy, the next nearest may be chosen, or the third-nearest, until a reasonably ‘quiet’ server is found. Usually it’s simple enough: users in Europe connect to European servers, US users – to US servers, and so on. However, if all of one continent’s servers are overloaded the system will automatically connect users to those of another continent to ensure the fastest possible connection.

Next, CDN proceeds to delivering the requested update.

The total size of the updates (for all products and all platforms) is approximately five gigabytes – in around 40,000 files. Every day, users from something like 25 million unique IP addresses fetch these updates (the number of end users is even greater). As you can imagine, it takes some seriously heavyweight bandwidth to distribute that many updates to so many products. At times the workload reaches 120Gbps; that’s hundreds of terabytes of data and dozens of billions of requests every day.

If this bandwidth ever proves to be insufficient for the task (which has never happened), we have a backup ready to come online. It’s provided by Akamai Technologies, and it’s practically impossible to choke.

The size of .@kaspersky updates is ~5Gb in around 40K files distributed at 120GbpsTweet

Statistics tend to get boring. But with updates – not so!…

Update stats provide a good overall picture of KL’s geographical spread. They tell us how many users in different locations come to get their treatment updates.

Among the countries sending the most update requests are Brazil, China, France, Germany, Japan, Mexico, Russia, the UK and USA. Surprisingly, Bangladesh is in 28th place, above Belgium, Portugal and Israel. It looks like we’ve made a big impact on the people of Bangladesh :).

But it’s at the tail end of the list where things get more intriguing. Here sit the countries with the smallest numbers of users requesting updates. Not surprisingly, we get some rather exotic countries and territories here, some of which might well be unfamiliar to you.

So here are the places at the bottom of the list – from the last to the tenth-to-last (aka today’s geography lesson) :

1) The Dutch half of the Caribbean island of Saint Martin, i.e., Sint Maarten (the other half’s French). There’s a total of one KL product in the country! Google informs us that the country’s governor is called Eugene Holiday! Maybe he’s the unique KIS user on the island 8-).

2) Antarctica has an impressive tally of five KL products! I wonder if they’re owned by polar expedition crew, or by those lucky guys cooling their heels at Union Glacier Camp waiting for a flight home? Hold on… The tourist season in Antarctica lasts from December through February. That means that these five are definitely polar researchers (not tourists), who are there now, sat online and requesting updates daily.

3) Tuvalu also has five KL products: one for each of its five atolls!

4) Montserrat has 14 products. The total population is 5000, of which 1500 are Internet users. That means KL is used by just 1% of the Internetted population! Looks like I might need to travel there in person to sort things out! Hmmm, the island’s nice and volcanic too… Nastya, please ring the airline for tix asap!

5) Saint Helena, the remote island where Napoleon and many other lesser-known personae non gratae lived in exile. Interesting facts and figures…: “One of the world’s most remote places”, “200 indigenous species of plant”, “a six-meter-tall black cabbage tree”… and 14 KL products!

6) The Cook Islands have 36 products. That works out at just 0.6% of Internet users (Nastya, while you’re on the phone…:). I might even have to consider extending my top-100 list of must-see places…

8) The Falkland Islands have 126 KL products – 6.6%. The stats here are curiously interesting: The population is 3000, 2900 of which are Internet users, with 1800 having Facebook accounts. I guess the 6.6% includes the military personnel based on the islands, which aren’t counted in the resident population.

9) Greenland. 268 products out of a total of 52,000 Internet users. Does that mean most residents have moved abroad?

10) The Kingdom of Tonga has 350 products; population: 100,000. But our sales reports say only 60 licenses were sold in the country. That doesn’t necessarily indicate a high rate of piracy; the rest of the licenses could have been brought in from other places.

A bit further up the back end of the list there are many other interesting places, including Nauru, Samoa, Tokelau, the Chagos Archipelago, Norfolk Island, the Marshall Islands, Anguilla…

And the moral to the story?

Literally, no matter where you are on the planet, KL will never leave you without updates :).