First, some pix. Actually – screenshots from one of my recent transatlantic flights. Notice anything unusual?…: 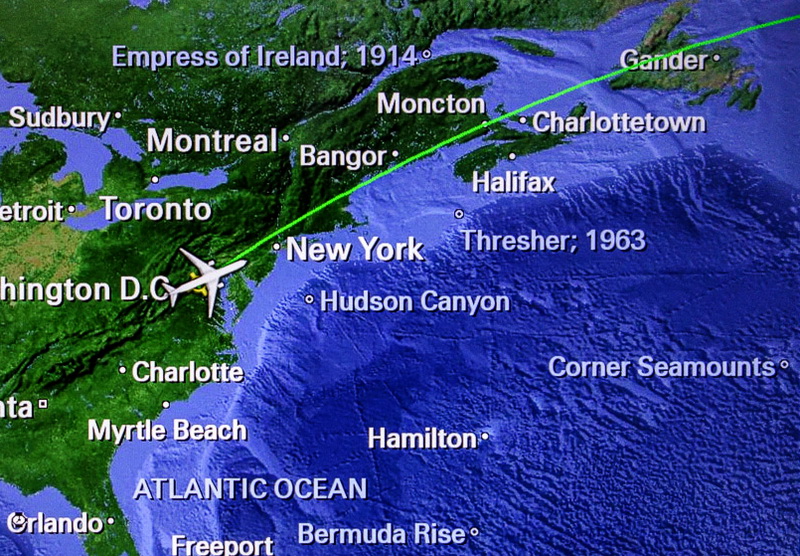 Let’s have a gander… 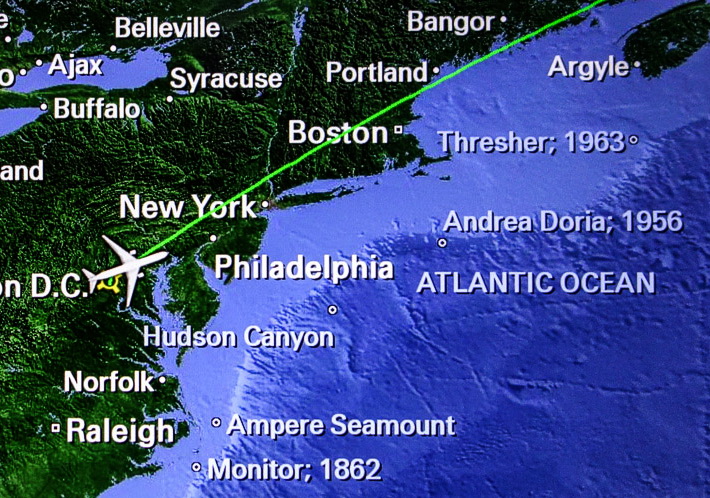 Let’s thresh this out 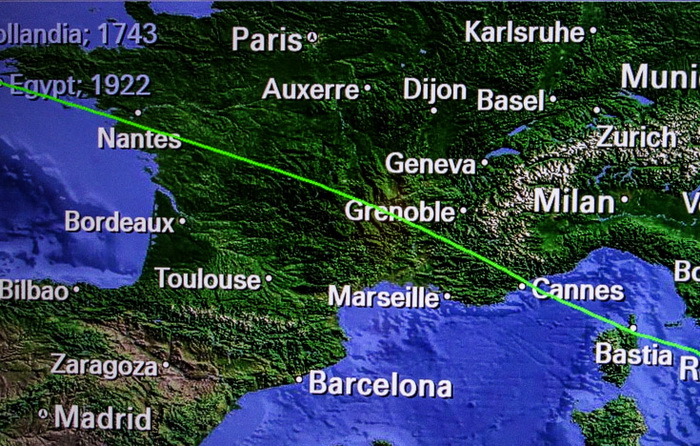 I told you I Cannes

Now, I know I’m not the first to notice this, and I must say I myself first observed this phenomenon quite a while back, but, well, I feel I really must say something finally about this feature of in-flight… underhandedness.

You see, I’m rather cheesed off with the phenomenon. I think it’s hitting below the belt, out of order, improper, unsporting. So what on earth (or in the sky?) is this ‘phenomenon’ I’m banging on about, if you haven’t already guessed from the above photos?

Well, as I’m sure you all know, on just about all international flights these days there’s a monitor in front of you that can show you all sorts of interesting digital entertainment. One such sort: the flight route map. A good idea? An excellent idea! You sit there, sipping your apple juice (or something a little stronger), and get a real-time running commentary of your flight – speed, altitude, ETA, etc., etc., along with weird and wonderful maps. Weird? Yes WEIRD. Because sometimes (when in particular needs to be researched and worked out) the map switches to one showing the locations of SUNKEN SHIPS. EEHH?

On the screenshots shown above are indicated the precise spots of maritime catastrophes:

This is aviation trolling of civil sea transportation – plain and simple!

Incidentally, ‘trolling‘ originally referred to a method of catching fish! And no, I haven’t got my English fishing industry terms mixed up! I’m not referring to trawling. So there!

I wonder if on cruise ships they go for civil aviation trolling – with maps of ‘notable’ plane crashes?

Now, however unethical and macabre all this trolling is (which is very), well, at the same time, some of the names of the sunken ships shown, plus their sinking dates (sometimes hundreds of years ago) got me all curious and wanting to find out more about them. Which is what I did. Here’s what I found:

The USS Thresher (SSN-593) was once the lead boat of its class (atomic submarine) of the United States Navy. On April 10, 1963 it was lost at sea with its entire crew tragically perishing with it (16 officers, 96 crew, 17 civilian engineers) while conducting deep-diving tests (it was down 360 meters below the surface). The wreck was later found in six parts on the seafloor spread over a 300 meter radius – some two and a half kilometers down. It’s thought that the cause of the disaster was a crack in a welded seam and malfunction in the system of the saltwater piping system.

This was an Italian transatlantic liner built in Genoa in the 1950s. On July 26, 1956 it sank after a collision with another liner, the Stockholm, off the coast near New York. There followed the most successful rescue operation in maritime history. The cause of the collision appears to be that the crews of the two ships got all mixed up because of the fog (even though they both had radar). A few bad maneuvers were made and the Stockholm rammed the Andrea Dorea in its right side. The Stockholm by magic managed to pull its nose out of the body of the Andrea and avoid total catastrophe. Passengers got into the lifeboats in an orderly fashion on the port (left) side, but couldn’t get into those on the starboard as the boat had listed severely to that side – so there weren’t enough.

Interestingly, Wikipedia describes the crew as demonstrating ‘good behavior’. However, other sources refer to the ‘disgraceful moral qualities of the Italian sailors’ or words to such effect. They were said to have got into the lifeboats themselves first without taking passengers with them. In all 60% of the crew and 40% of the passengers were saved in the lifeboats.

The first real US iron-hulled steamship, built in 1862. An original flat-bottomed construction, from the outside it resembled a buoy sticking out of the water. It took part in the Battle of Hampton Roads against the Confederate armored boat the Virginia, which by a twist of fate was captured from the Union forces as an incomplete construction and whose wooden frame was later clad with steel sheets.

The battle was a bit like two knights in armor, each hitting the other’s armored head with a mace. In the end the Monitor’s ammunition ended, its captain lost an eye, and the ship was led away in defeat under escort.

The battle was immortalized in 1991 in the film Ironclads.

It sank less than a year after it was launched into the water after repairs. What its critics feared actually happened: lashed by the waves, water got into the hold via a badly isolated opening and it quickly dropped to the sea bottom. Four officers and 12 sailors died. 49 souls were saved. The location of the wreck of the Monitor became first national sea sanctuary of the USA, in 1975. Because of strong currents and changeable weather there the location is often referred to as the Graveyard of the Atlantic.

This was a luxury transatlantic liner that sailed regularly between the UK and Canada. Not long after the Titanic sank, special equipment for detecting icebergs was installed on the boat. It was also equipped with 2212 life vests and 36 lifeboats that could hold 1866 pax.

On May 29, 1914, in thick fog (the lethal bane of ships lives), it collided with the Norwegian coal freighter Storstad on the Saint-Laurent river and in just 14 minutes sank to the river bottom 40 meters below as the hole the Storstad made was so big. Despite being so well-equipped for emergencies, most on the Empress didn’t make it in time into the life boats – many didn’t even have time to wake up. In the end most were saved on the Storstad’s lifeboats. On board were 1477 (420 – crew, 1057 – passengers). Out of that number 463 survived.

Related trivia: There’s a tale that says the ship’s cat, Emmy, who’d been a permanent fixture on the ship for two years, ran off the boat before it set off on its doomed journey, as if sensing the danger ahead… Another tale says one Frank Tower, who allegedly was a coal stoker also on the Titanic, survived this disaster too.

This was a 700-ton, 42-meter, 32-canon ship with sails of the Dutch East India Company. It sailed for a little more than a year. On July 13, 1743 on its way to Batavia (today’s Jakarta) it ran against some rocks near Annet, one of the Isles of Scilly off the coast of Cornwall in southwest England. As a result 276 died. The wreck was found in 1971 by a London lawyer doing a bit of an Indiana Jones, who found quite a bit of similarly Lost Ark-esque treasure!

A British passenger liner that did trips to India and back. It sank on May 20, 1922 in the English Channel after having collided with the Seine in fog. On board the Egypt was a cargo of gold and silver worth around £200 million in today’s money. All that booty also attracted Indiana Jones types, though up to 1930 the exact place of the sinking was unknown. Eventually an Italian, Giovanni Quaglia, managed to recover the cache using an advanced (for those times) armored diving suit and underwater explosions for opening the Egypt’s safes. By 1935 almost all the valuable cargo had been extracted from 170 meters below. Oh yes, and trivia aside, 252 out of the 338 passengers and members of the crew were saved.

Bonus: a database of sunken ships.

The monitor in the chair gave us some more interesting places of interest on the map:

Bizarre! These canyons and rivers that now lie on the ocean bottom once contained freshwater fish and were exposed to the sun! And prehistoric folks once crossed the Bering isthmus joining Siberia and Alaska. All quite incredible. For those interested – read this.

That’s all for civil aviation’s (and my!) maritime trolling!

Now for desert: a brainteaser about a train and a fly, in two versions:

Between Moscow and St. Petersburg lie 600 kilometers of railroad. Simultaneously from the Moskovsky station in St. Petersburg and the Leningradsky station in Moscow two passenger trains depart, each heading for the other city on that railroad. The speed of each train is 50 km/h. On the windscreen of the Moscow train sits a fly, which gets frightened and flies ahead in the direction of St. Pete at a speed of 75 km/h, but which, on seeing the oncoming train, gets scared again and bolts with the same speed back towards Moscow. It sees the Moscow train and again gets scared. Thus it flits between the trains to and fro until they pass each other half-way between the two cities. How many kilometers does the fly fly up until the moment when the trains meet?

The railroad between Tokyo and Osaka is, for the purposes of this brainteaser, 500 km long. Simultaneously from Tokyo Station and Shin-Osaka Station leave two Shinkansen trains heading towards each other. On the windscreen of the Tokyo Shinkansen sits a fly, but since this train travels at a speed of 300 km/h, before it can say ああ、いや, the fly gets blown off, and then flies at a cruising speed of 75 km/h in a random direction. How far does the fly fly by the time when the Shinkansens meet each other, taking into account the fact that the average total route speed of the Shinkansens is 250 km/h – since there are stops at Yokohama, Nagoya and Kyoto?