The Great Ocean Road, Australia. I can now say I’ve been there, traveled that, got the… confirmation: it’s another must-see place in the world. And +1 to my list… 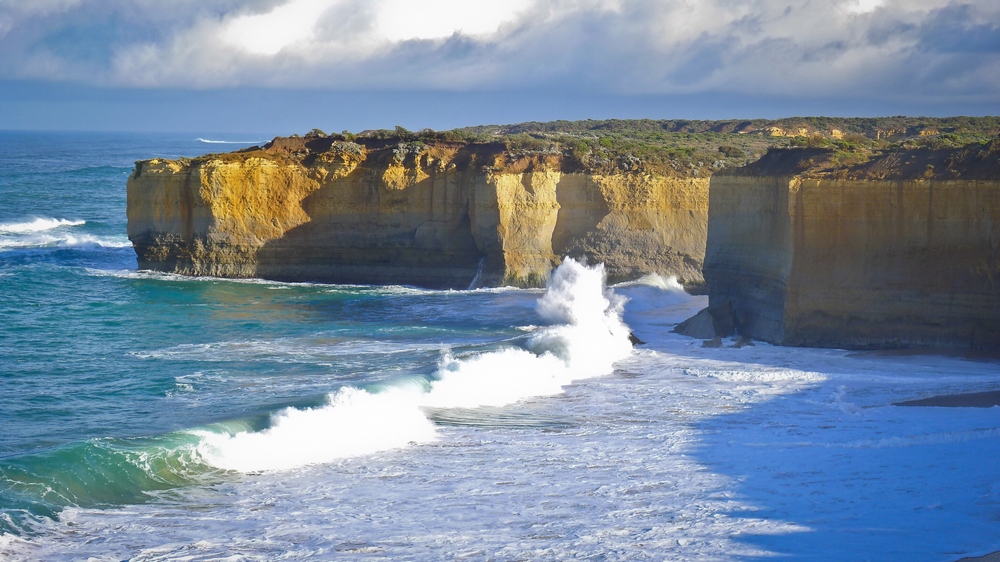 So just what is the Great Ocean Road? Surprisingly, it’s a road. It’s also great, as in both great – super, and great – long; and it mostly hugs the ocean shore. It was built in the early part of the last century along a stretch of the craggy coast of the southeastern Australian state of Victoria. It’s rich in heritage, incredibly curvy, and offers breathtaking views from the road itself and also just off it a little inland – you just need to leave the road a hundred meters or so to get extra special views at the right, marked places. 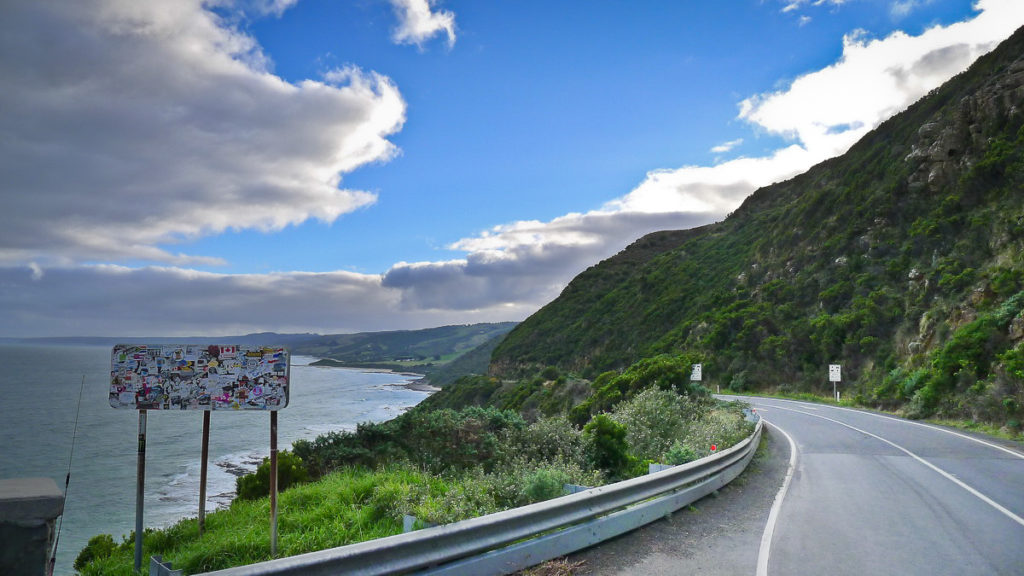 In two days we traveled practically the full length of the Great Ocean Road both ways, stopping over for the night at one end of it in the small town of Warrnambool. This is what it looks like at seven in the morning on a Sunday. It seemed a nice enough town – peaceful, nothing too fancy, but spotless! Fair dinkum. 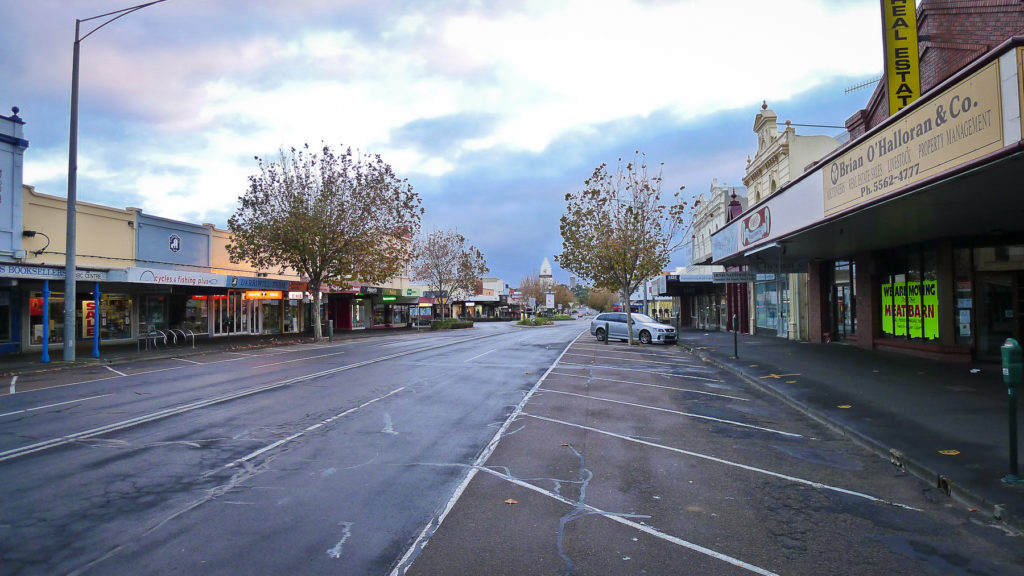 We tried to get a close look of as much as we could on our trip – but it’s difficult to take in more than just bits in such a short time since everything is just so vast. Alas, two days is waaay to short a time to have a good look at all the marked out natural wonders here. A good three or four days are needed really – not including time spent actually traveling on the road. It’s such an amazing place – scenic, endless… mind-blowing. There’s the nearly constant sound of huge breaking waves that have for millions of years been turning the steep cliffs into sand on the beach, and a harsh southerly wind blowing all the way from that other wondrous place – Antarctica.

So if you might ever get the slightest chance – drop everything and just get there! A brain-blitz is guaranteed. That is, if the weather’s nice and sunny and dry – which it normally is, I’m told. 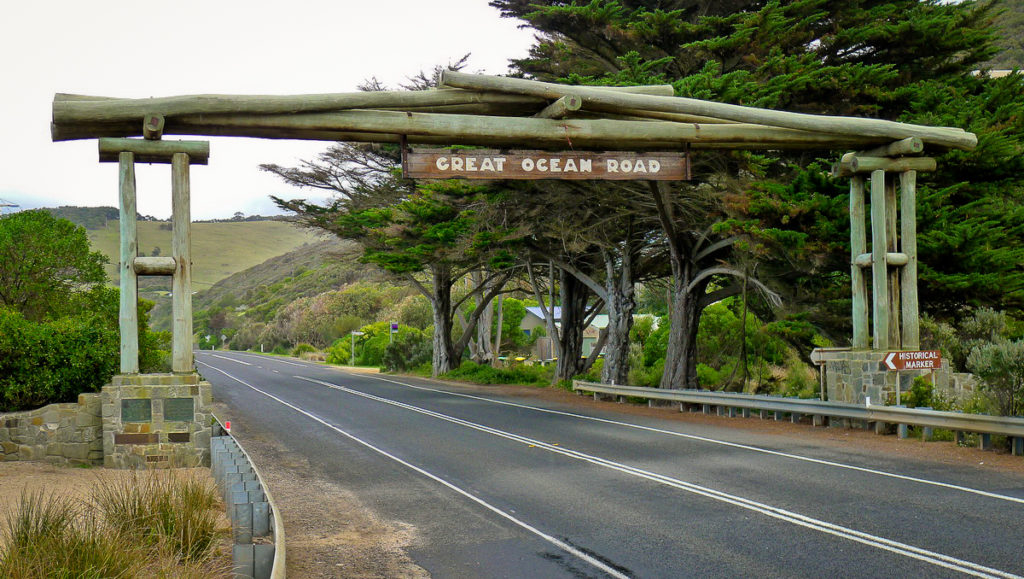 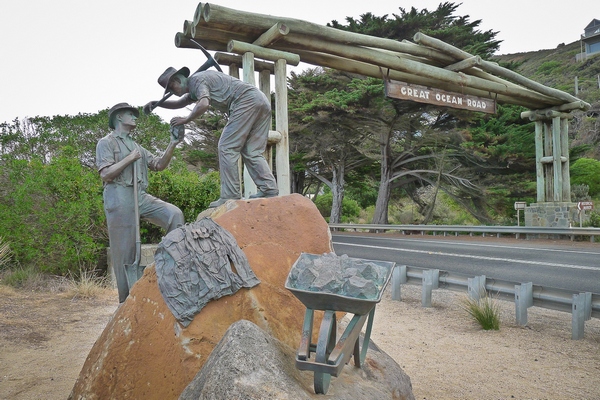 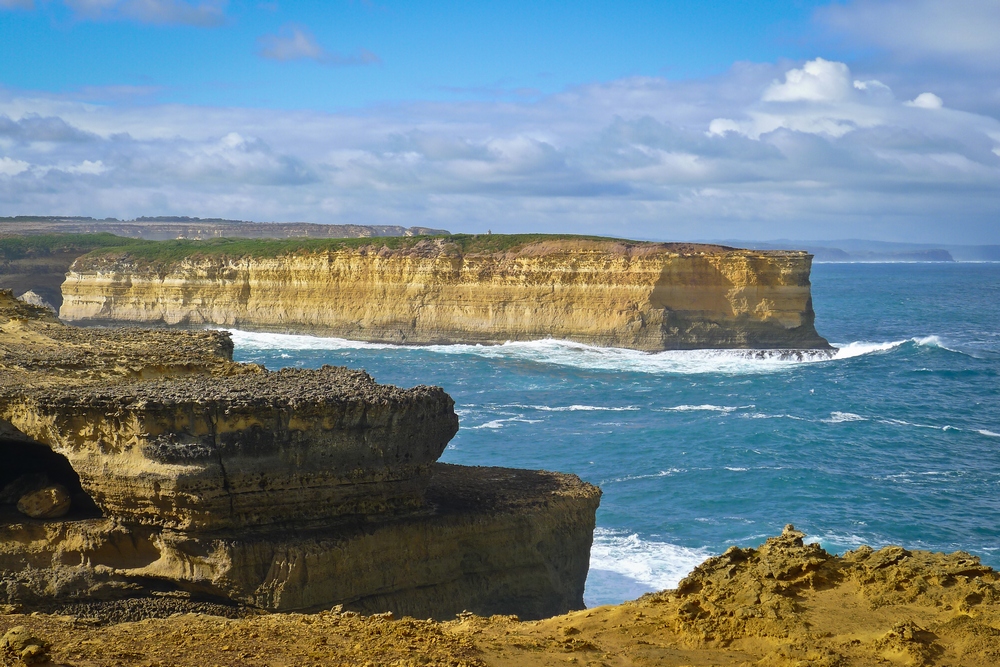 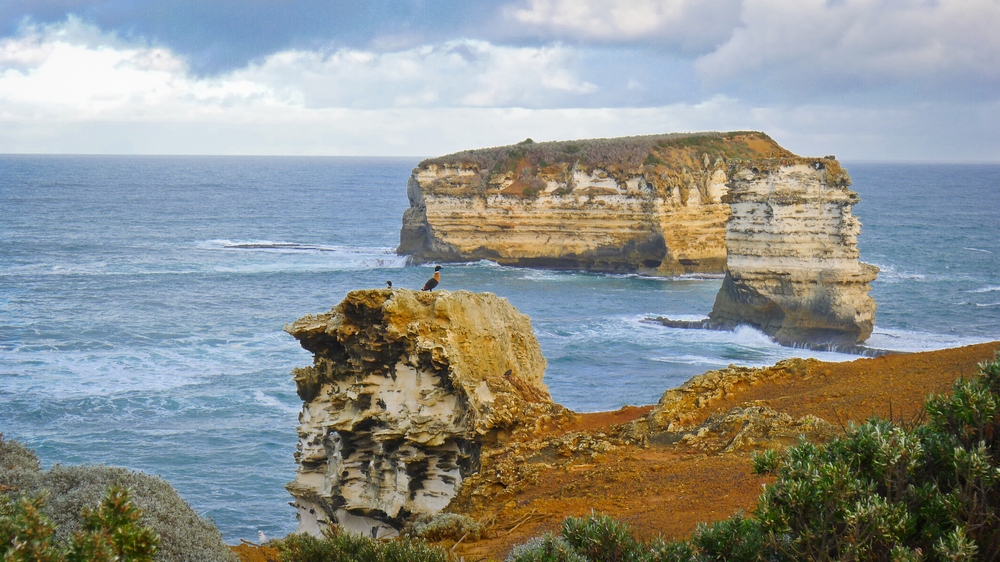 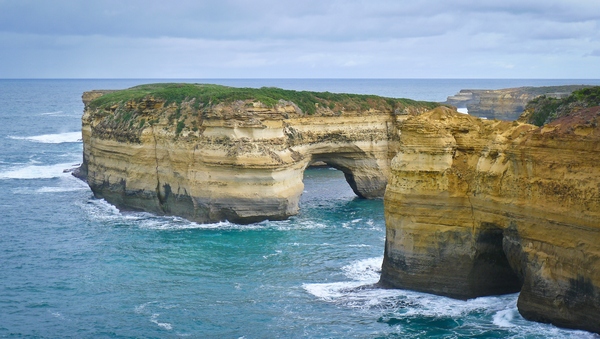 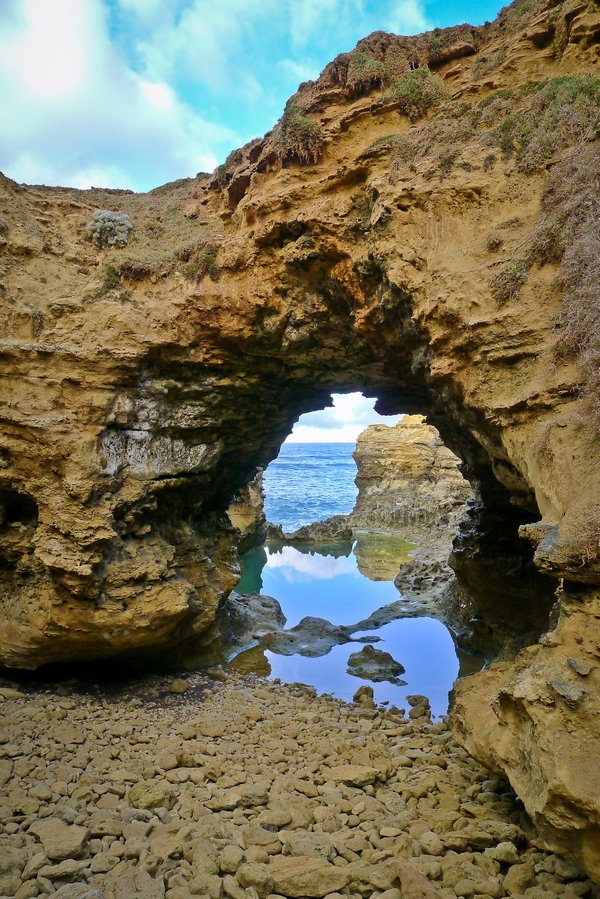 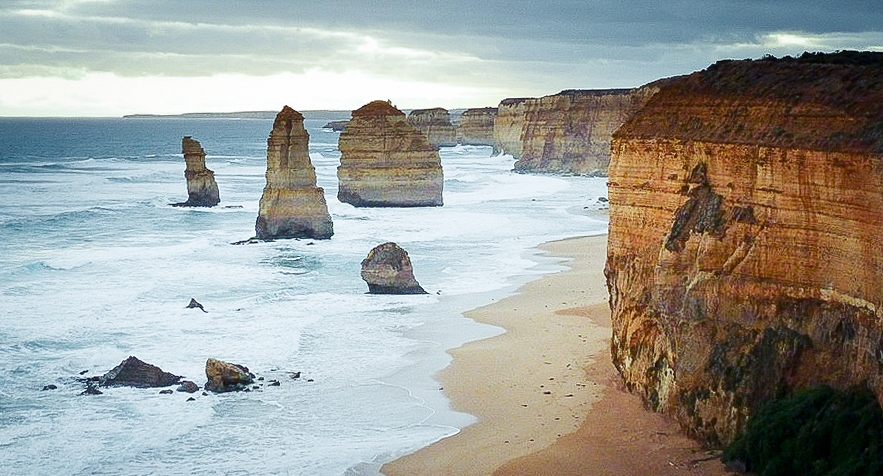 The Twelve Apostles are probably the highlight of a Great Ocean Road trip, being the most striking landmark along the route. They really are impressive: massive, stratified with layers of different colored rock, and the loud crashing waves below.

Apparently the accepted quantity of these “Apostles” – 12 – appears to be nothing more than a marketing ploy. According to unverified sources (the Lonely Planet Melbourne and Victoria City Guide) the Twelve Apostles are not actually 12 in number and, according to all records, never have been. From the viewing platform you can clearly count seven Apostles. Maybe there are some other obscure ones? Locals tend to retort: “it depends where you look from,” which really is true. 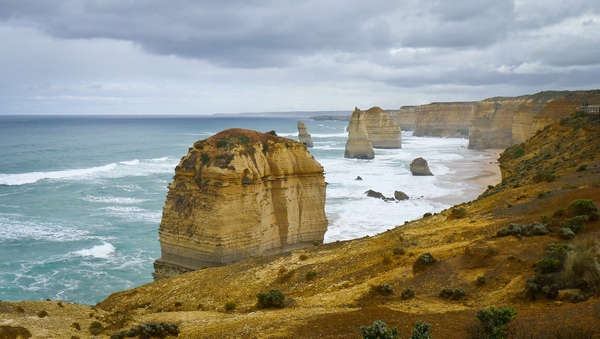 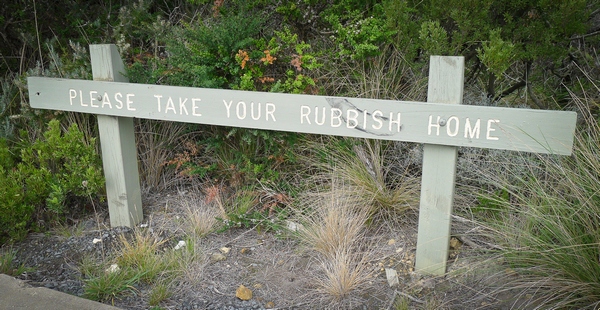 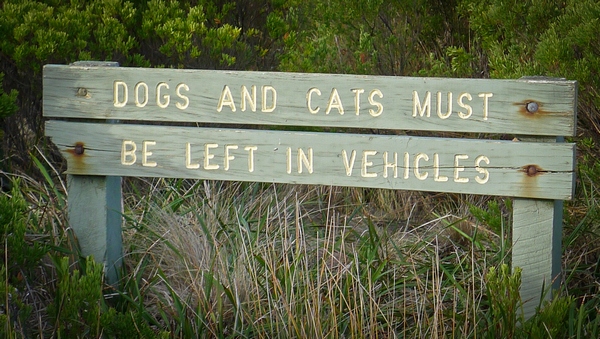 The Apostles are called “stacks” in geological lingo. They were originally called the “Sow and Piglets” in the 1920s. Then someone in the ’60s thought they might attract tourists with a more venerable name, so they were renamed the Apostles. Since apostles tend to come by the dozen, the number 12 was added sometime later. Btw, there are two stacks on the eastern side of the viewing platform, which it turns out are not technically Apostles – they’re Gog and Magog. You seeing the logic to all this? Me neither!

So anyway, there aren’t 12 stacks. They say that in a boat or – better – a helicopter, you might count 11… Whatever.

But all the same, the dozen-or-so Apostles are still pretty cool, marketing or no – I imagine especially so when it’s nice weather. You’d expect maybe that it’s nice weather here all year round; you know – the Australia thing with the merciless scorching sun and all; but actually no. While we were there large black clouds loomed above us from which rain proceeded to fairly gush. So we never got to see the whole picture in all its sunny splendor, which I was not at all happy about. Grumble, grumble – but I always find nice sunny weather always makes fantastic scenery even more fantastic. Oh well, you can’t have everything. I’ll just have to make sure I get back here to preach the epistles to the Apostles, etc. when the weather’s more like that in Jerusalem. 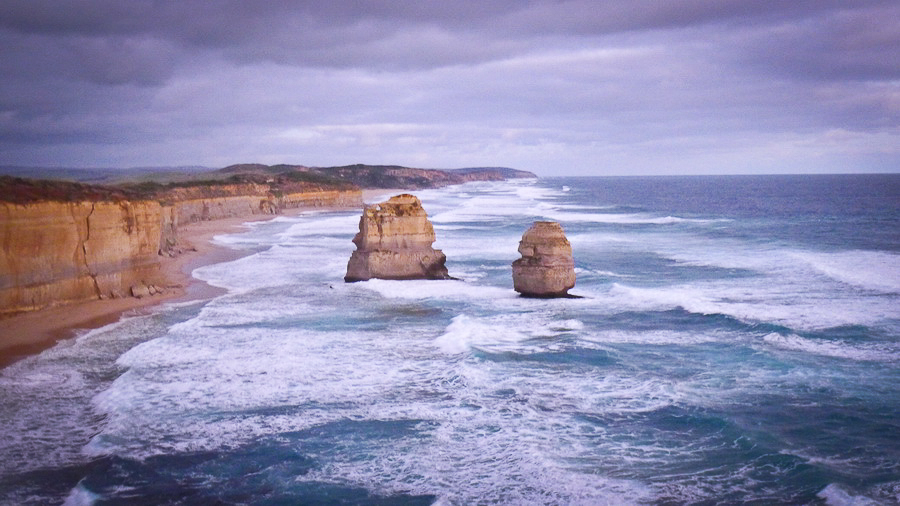 Now a little about the road itself.

As I already mentioned, it mostly hugs the shore in snake-like fashion. It also cuts through a rainforest around the middle, and another section sees it crisscross gorgeous grassy hills and valleys dotted with (completely black) grazing cows (where’d the white bits go?) and very gray sheep. The perimeter fences around the fields are in some places painted sky blue. Stumped as to why… Rather, I’m on the fence between “no reason whatsoever” and “something to do with visibility in this vast land” :) 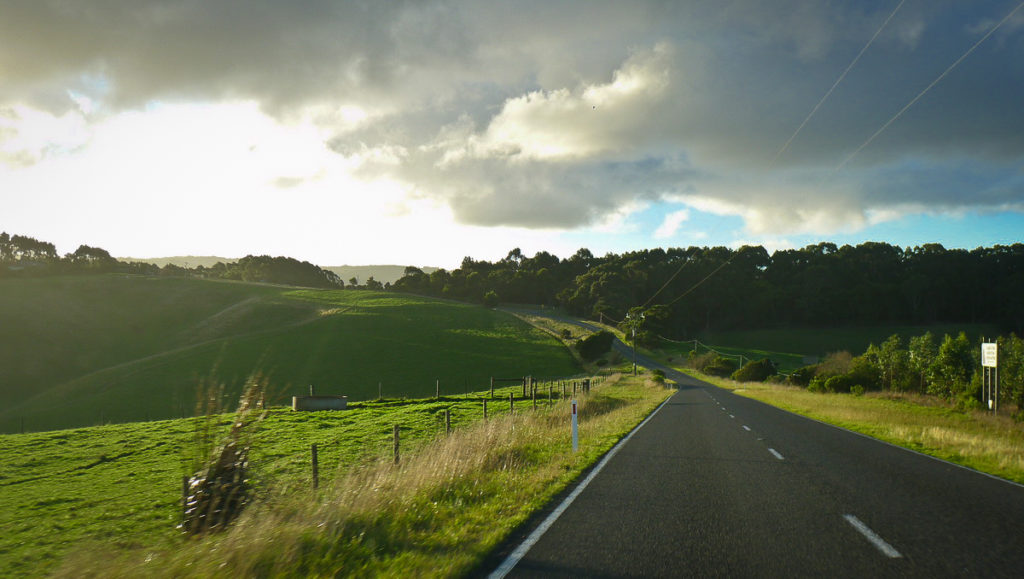 There are a few minor cons that accompany all the pros of the Great Ocean Road: to get to it you need to travel 50 miles along a fully autobahn-looking highway – which has a top speed limit of 60 mph (100km/h)! Why bother going to all the trouble of the pseudo-autobahn thing?! I found out fairly sharpish the road has another feature too – it brings on sleep much better than… a strong cup of chamomile & valerian… but I didn’t want to sleep!

Even more irritating is the fact that the local traffic police are real strict -for going 10 mph over the speed limit you can incur a fine of 100+ AUD (AUD are practically the same as USD), plus a 30-minute delay due to an “inspection”, filling in forms, etc. What happened to the lawlessness I saw in Underbelly? Clearly an urban myth…

But worst of all was being bossed about – wait for it – by a car! On edging above 60 the BMW we were in would start chirping and even flash across the windscreen a warning that we we’re being ever so naughty. Well, of all the things! I really wasn’t ready for that – compounding the absurd speed limit itself! Eeh, Beemer – get a grip (and read Orwell & Huxley’s finest, too:). 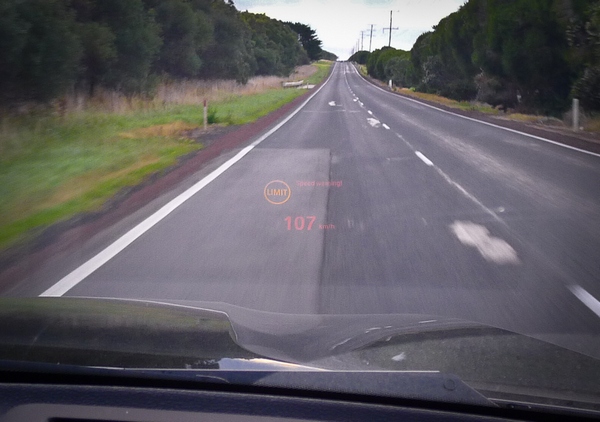 The rest of the snaps are here.

To conclude: Leaving the city of Lorne on the first leg of our trip, near the pier there’s a simply superb specialty seafood place – the Lorne Pier Restaurant. Hmm, so fresh, so perfectly cooked, and so nicely presented. Fab fish! 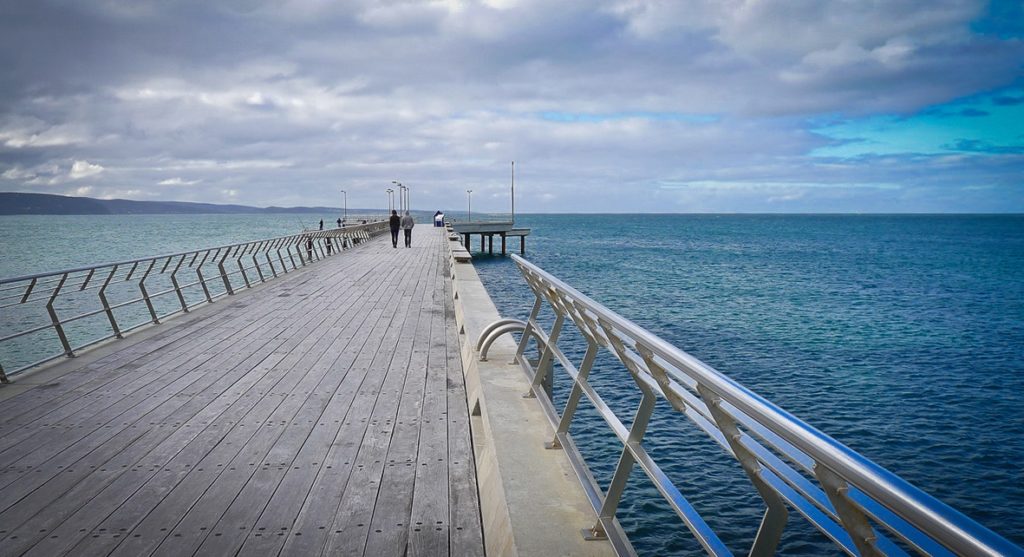 Eek, another “to conclude”…

An untamed Australian from the outback à la Crocodile Dundee winds up in New York. Crossing 5th Avenue, he almost falls under the wheels of a passing truck (he wasn’t that untamed – they drive on the right Down Under; he was looking the wrong way). Anyway, an NYPD cop grabs the shaken-up Aussie and asks him: “Did you come to die?” The reply: “Nah mate, yesterdie!” 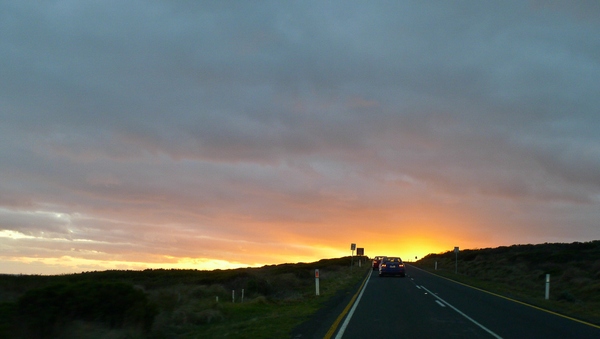