Pamukkale’s known for its travertine terraces, but that’s not all; it’s also known for the hot air ballooning that goes on here aplenty. 100% Must-do. The only problem for some folks – you have to get up at the crack of dawn to experience it… ->

Even how they inflate the balloons before dawn is a spectacle worth seeing. First it’s all quiet, calm and peaceful. Then they start up the noisy furnaces! And slowly, several, then a dozen, then scores of hot-air balloons all start bulging and rising up from their sides into the air (with the basket still on the ground). And they get big. Real big! -> 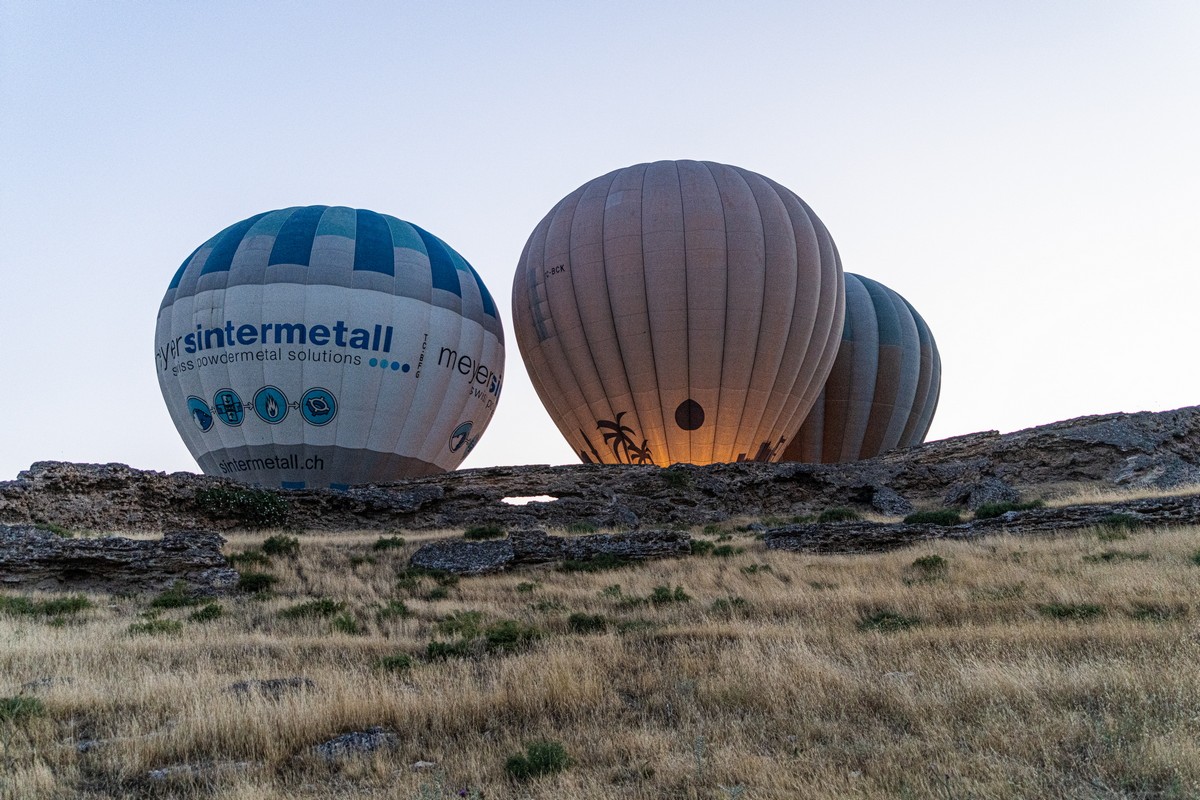 Close up, the process is just as fascinating. Here’s our balloon: 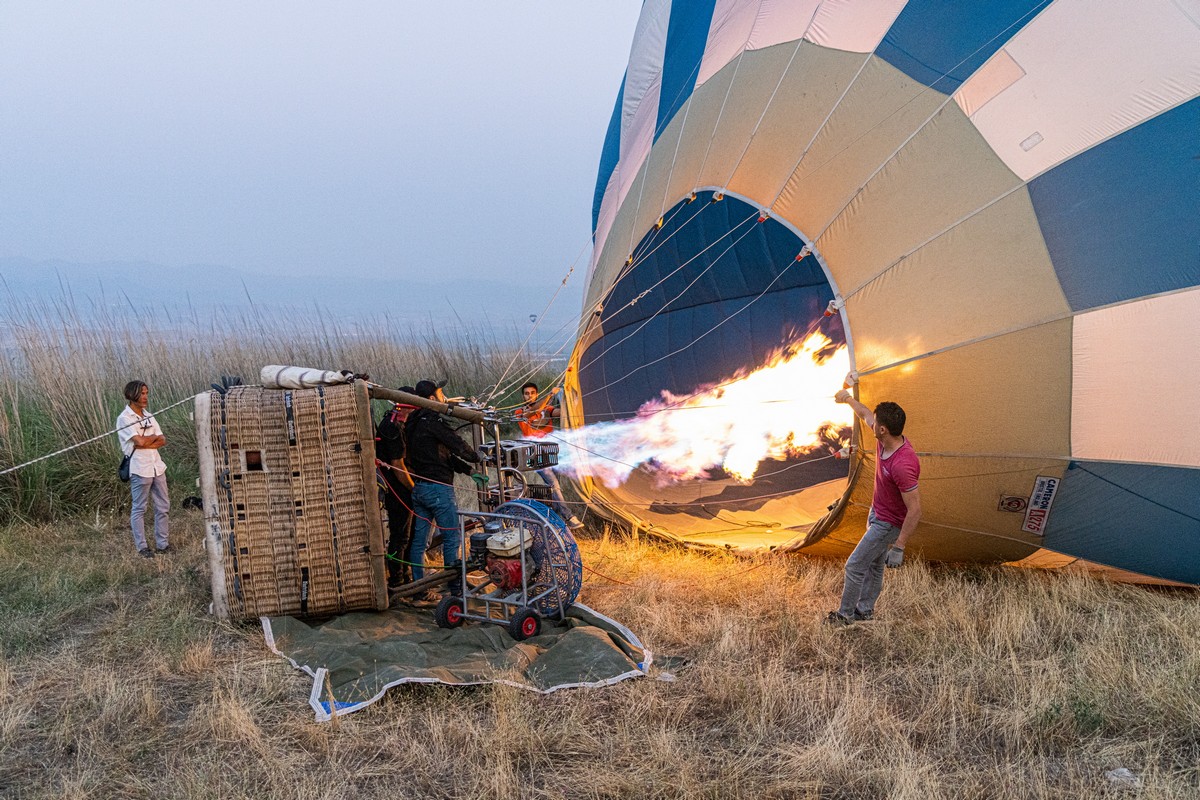 We were lucky – our balloon flew directly above and past the white terraces. At one point we were just two meters away from them: 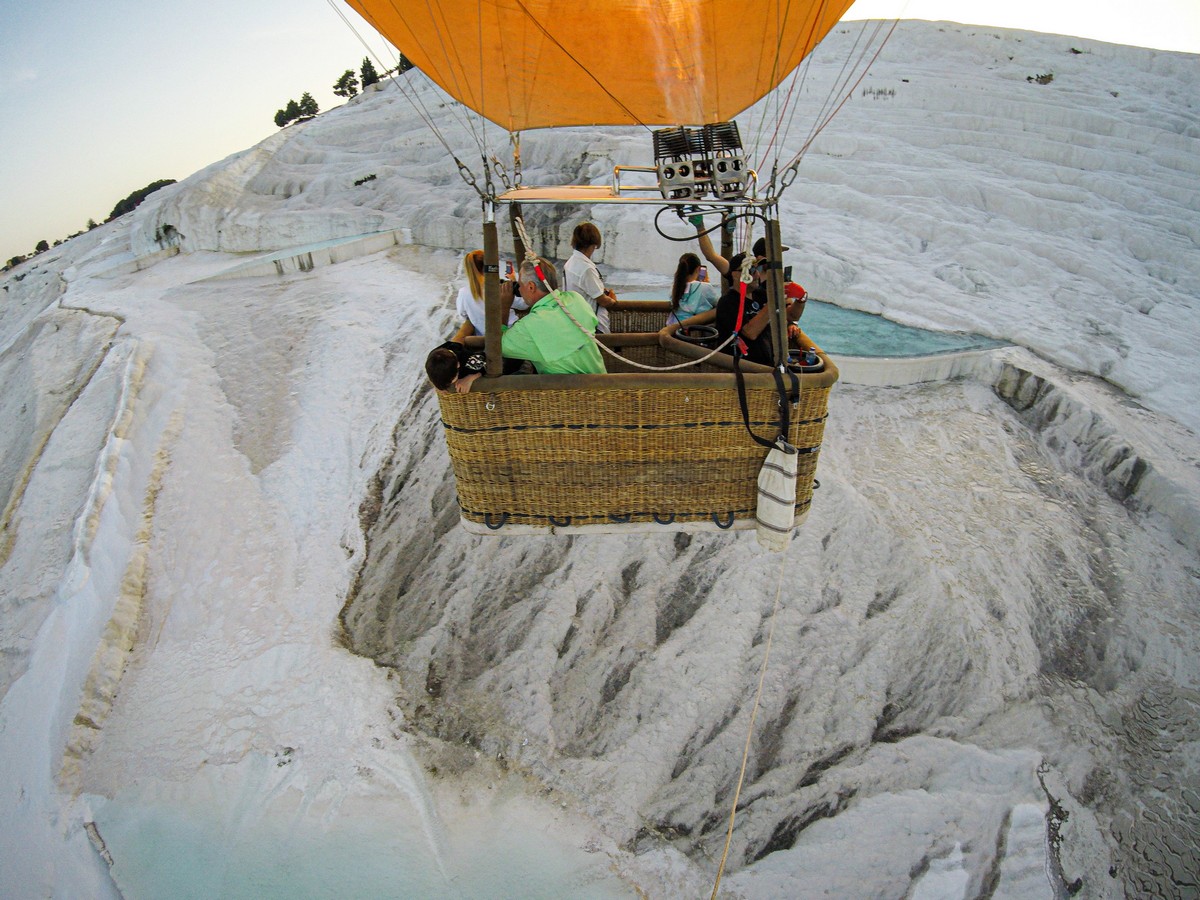 Then higher we go – for the broader, panoramic views:

Over there – some archeology. About that in a bit… 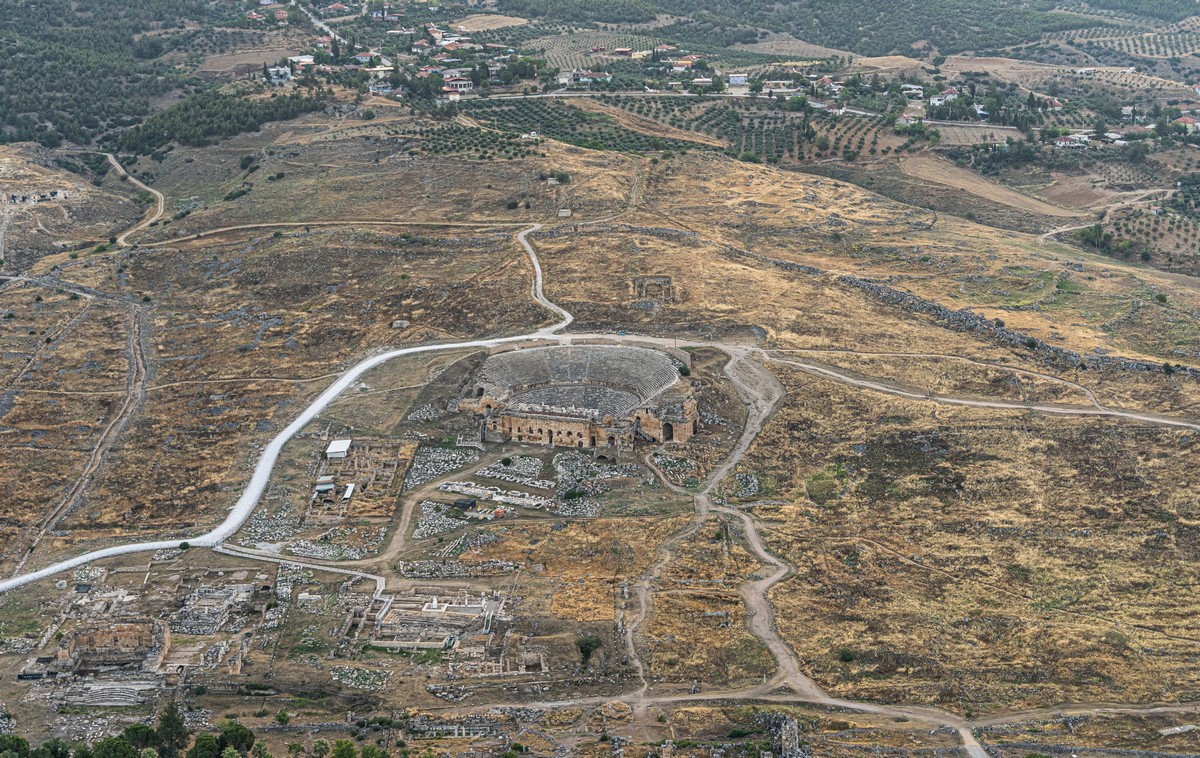 And there’s the path upon which tourists stroll and photoshoots take place on: 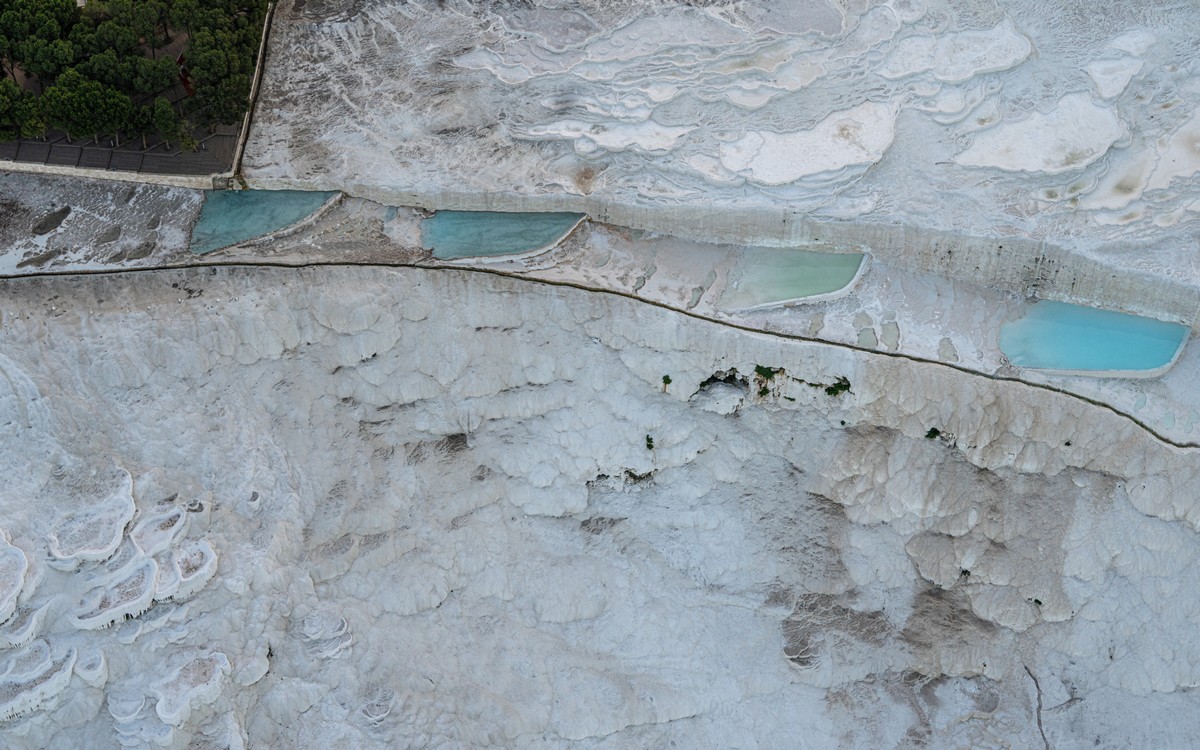 The main terraces, with stalactites: 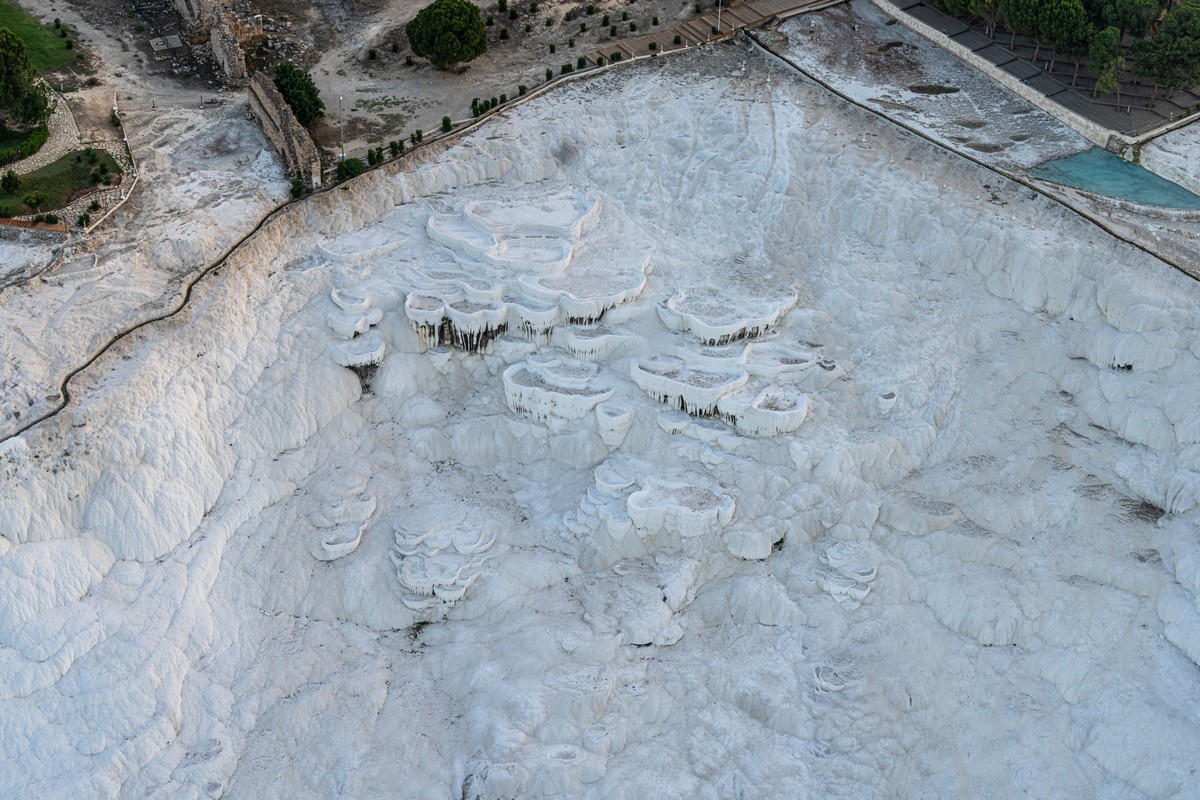 We almost touch the ground here. We were even asked not to make a jump for it! 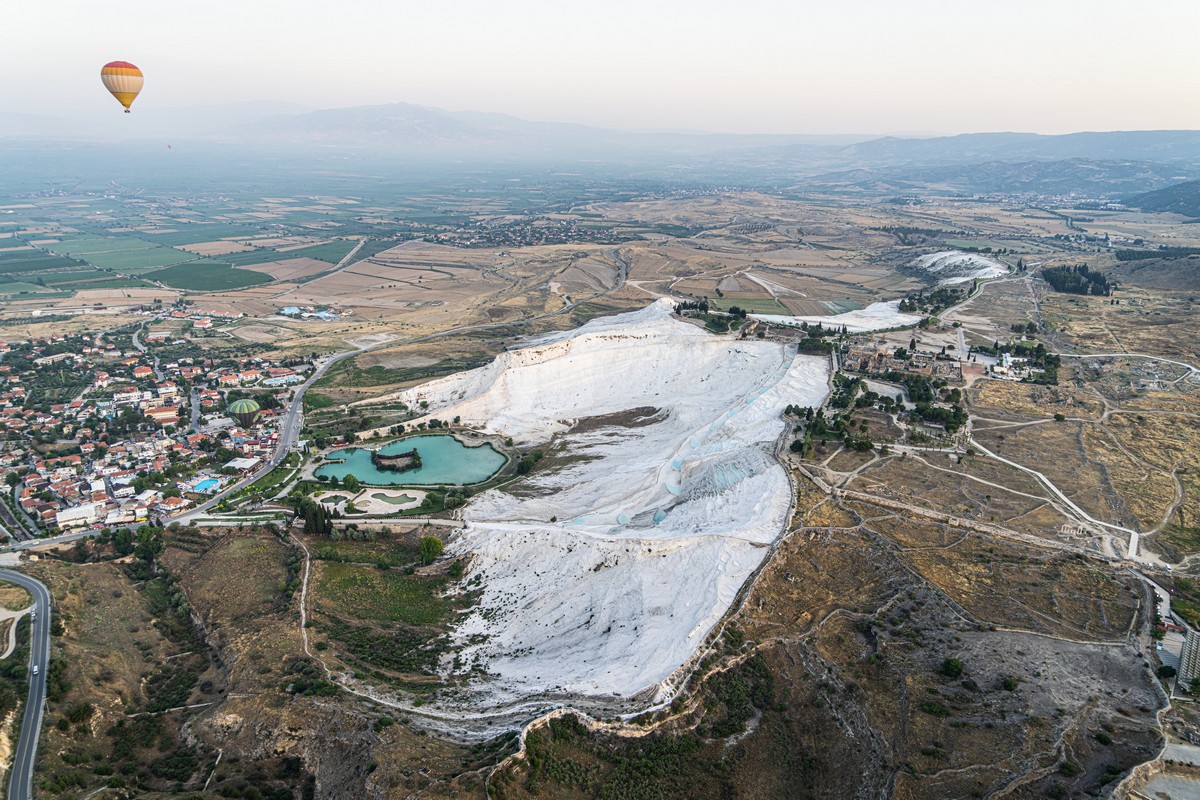 After our balloon ride, it was into an ancient swimming pool for a dip. And the water temperature was just perfect – around 40°C. 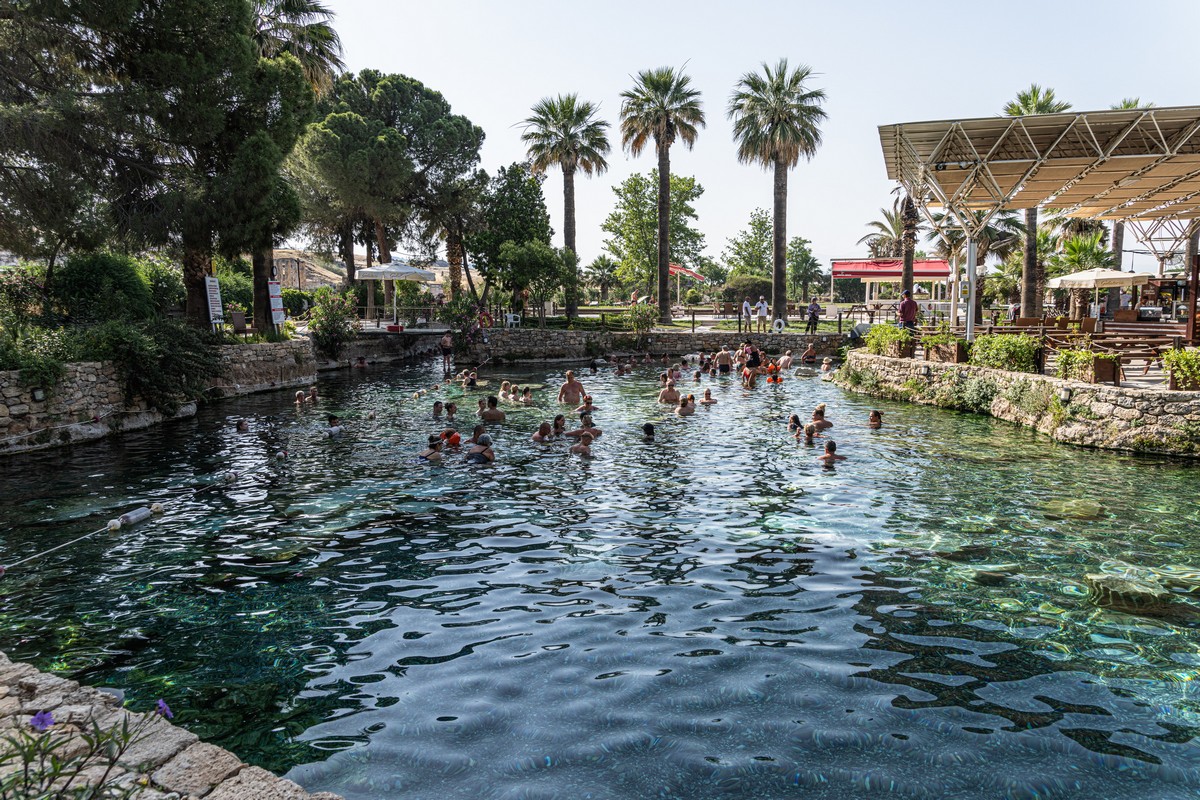 The baths at this spa-center were a hit even with… the Romans! Yes – they’re that old! They used to come here to take the healthful waters. Aha – I’ve found a remnant of that age of old: a Roman-looking marble/granite column! -> 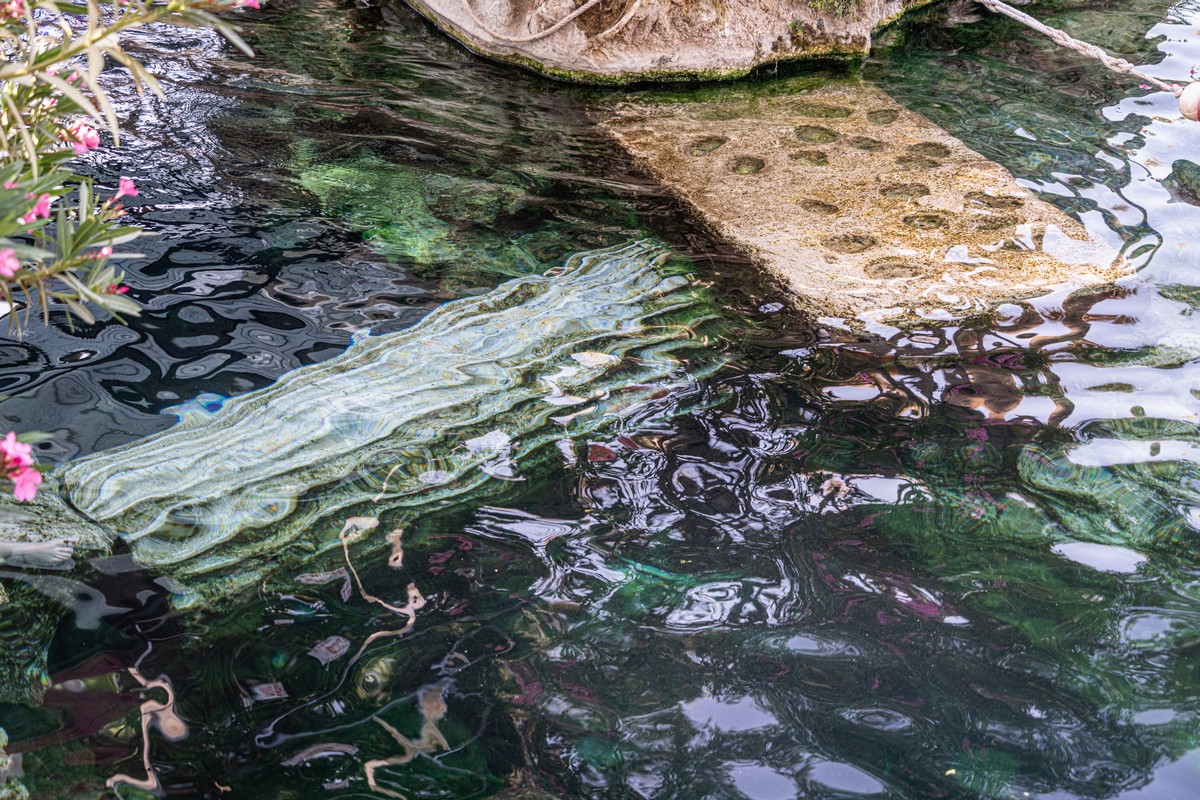 Of course, such brilliant baths – they’re bound to be popular. But I wasn’t quite expecting a full-house bath at 8am! Ah – but then I recalled where we were – Turkey in the summer. Very hot. Accordingly, folks tend to get a lot done very early in the morning or late in the evening; it’s too hot for comfort during the day for many an endeavor outdoors – even half-submerged in a swimming pool! 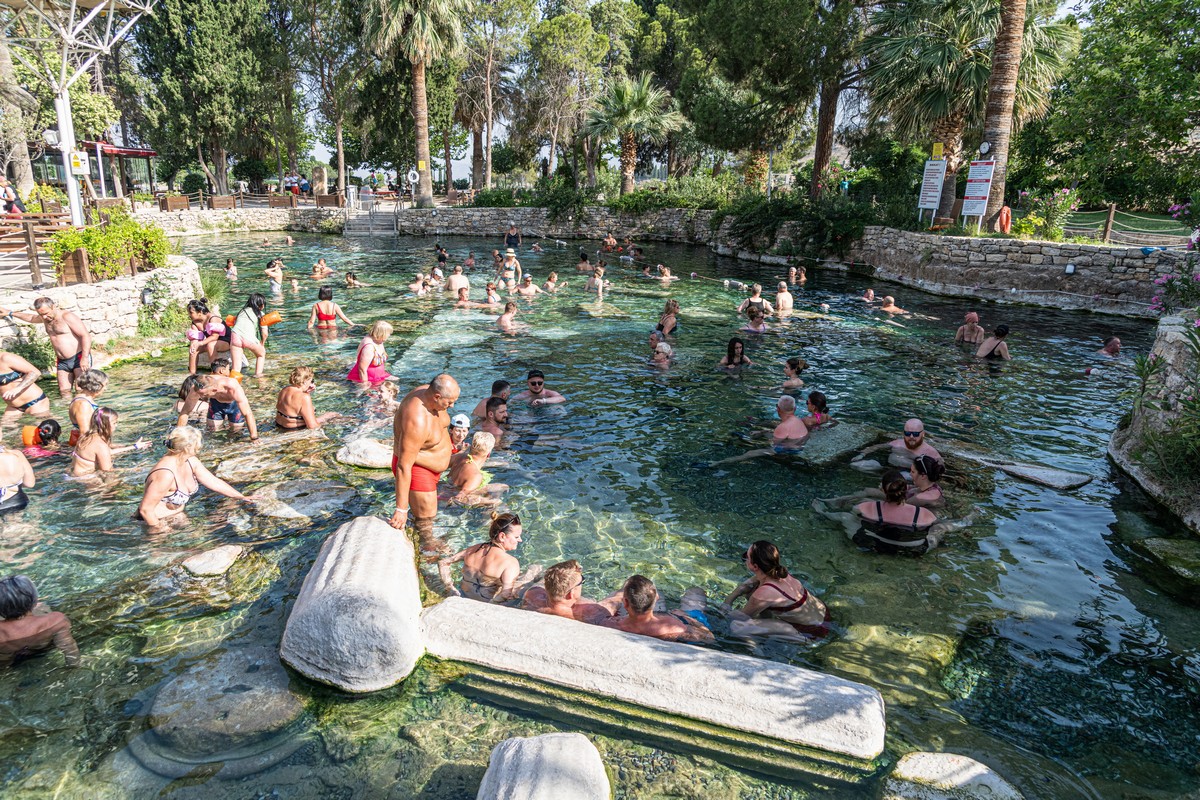 Btw: from what I heard with my own ears, most of the tourists here spoke… Russian. Around a quarter spoke Korean, while I heard neither Japanese nor Chinese once. Re the latter – the one-to-two-week quarantine you have to endure upon returning to China – that’s probably what’s putting them off. I heard the occasional European (English, French, Italian) tongue, but very rarely. I heard German not once. I wonder, has Turkey – in particular, Pamukkale – become less popular with the Germans? 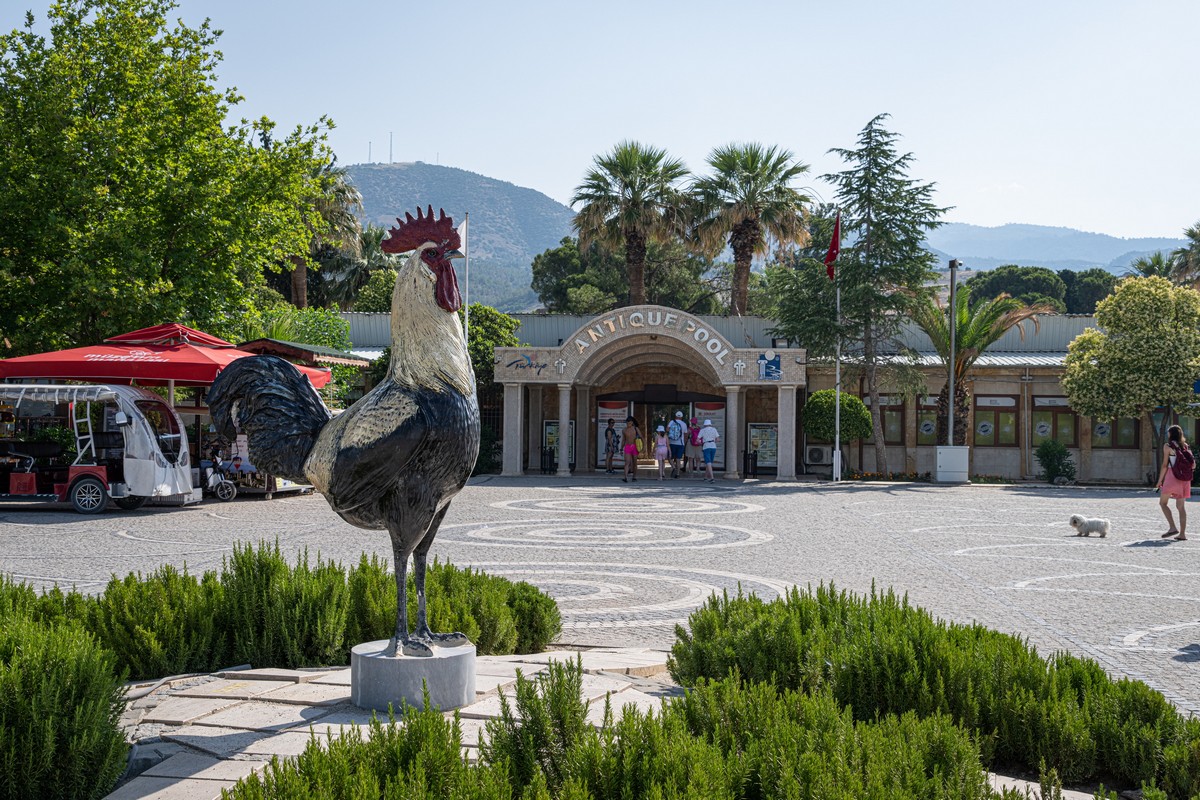 Now for a spot of the historical-archeological, as promised…

This spa settlement was popular even before the Romans. There were the ancient Greeks before them, and earlier than the Greeks there was some other civilization; however, who they were exactly is unknown. The earliest Greek constructions were collectively known as Hierapolis. 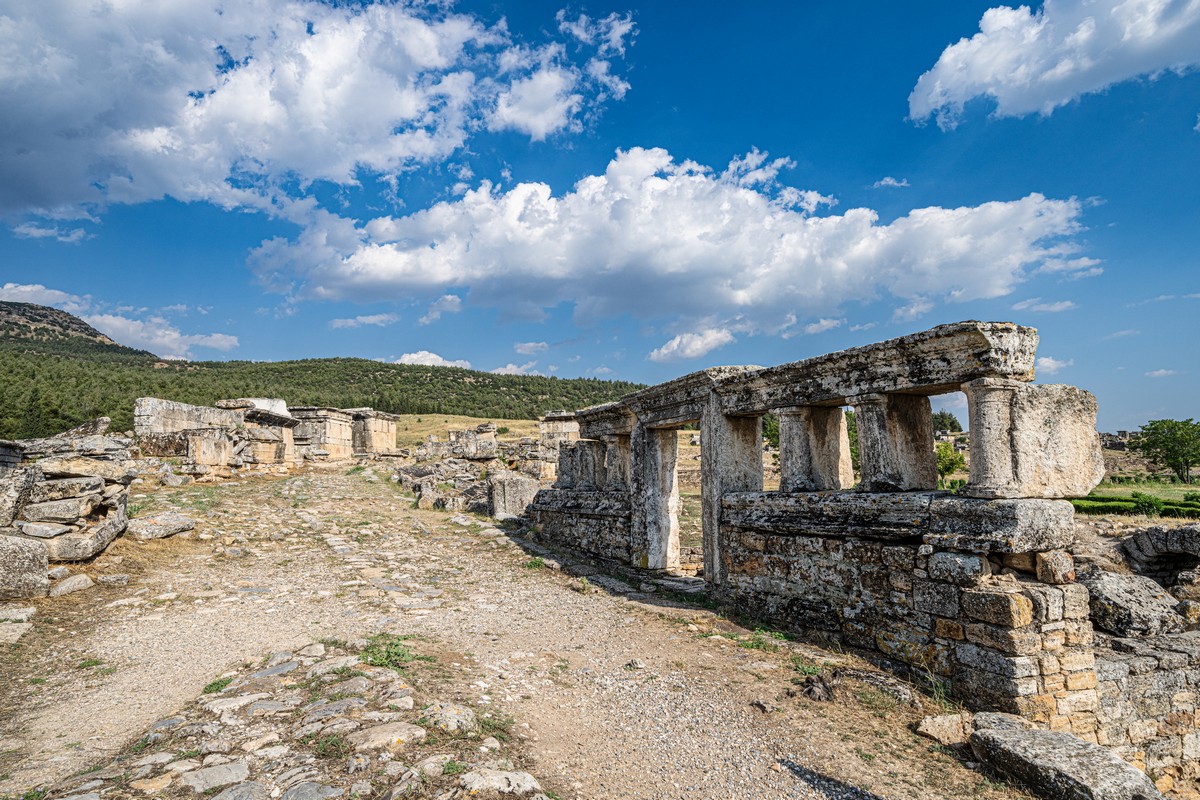 Roads, burial grounds, buildings – albeit in ruins. Founded 200BC. Impressive!… 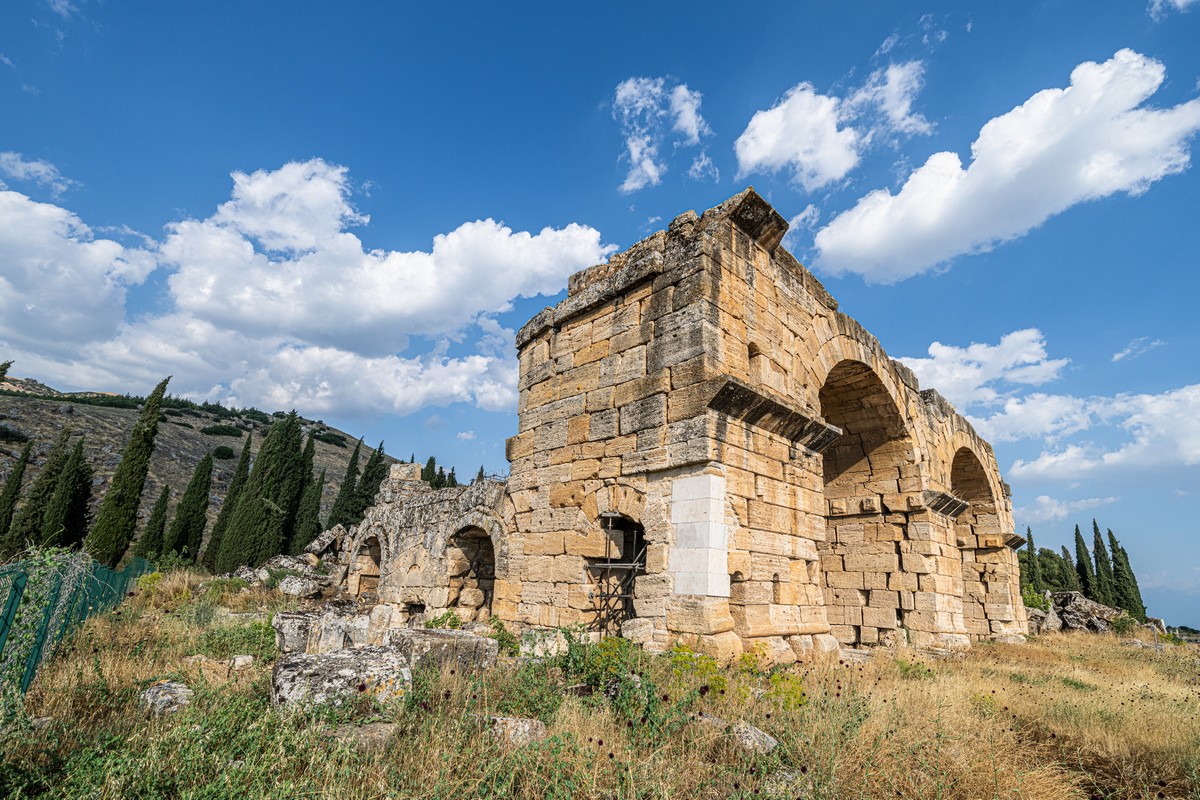 The ancients too had good taste in chic vacation spots with views to die for ). 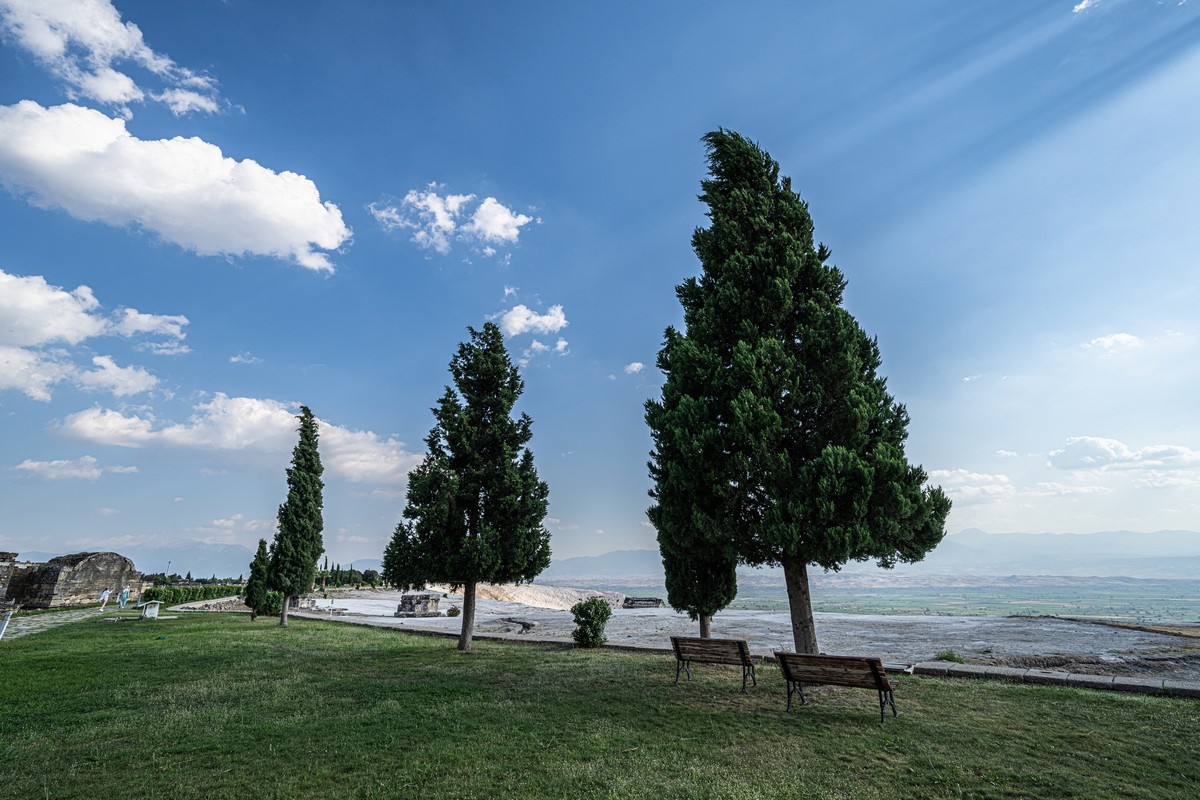 It’s best walking around here early morning. Then to head straight to the baths…

And that’s all from Pamukkale folks. Back tomorrow from… Mount Everest (kinda:)!…

The rest of the photos from Pamukkale are here.