The last time I was in Pamukkale, Turkey, was way back in June 2004 after a regional partner conference. And as, back then, I never carried a camera around with me like today, I’ve no pics to show for it; all I have are hazy memories. Ever since then, I’d wanted to return, as I was so impressed with what I saw (it’s even made my Top-100, no less), and was curious to see how things had changed since. For now – a single photo; more – later… 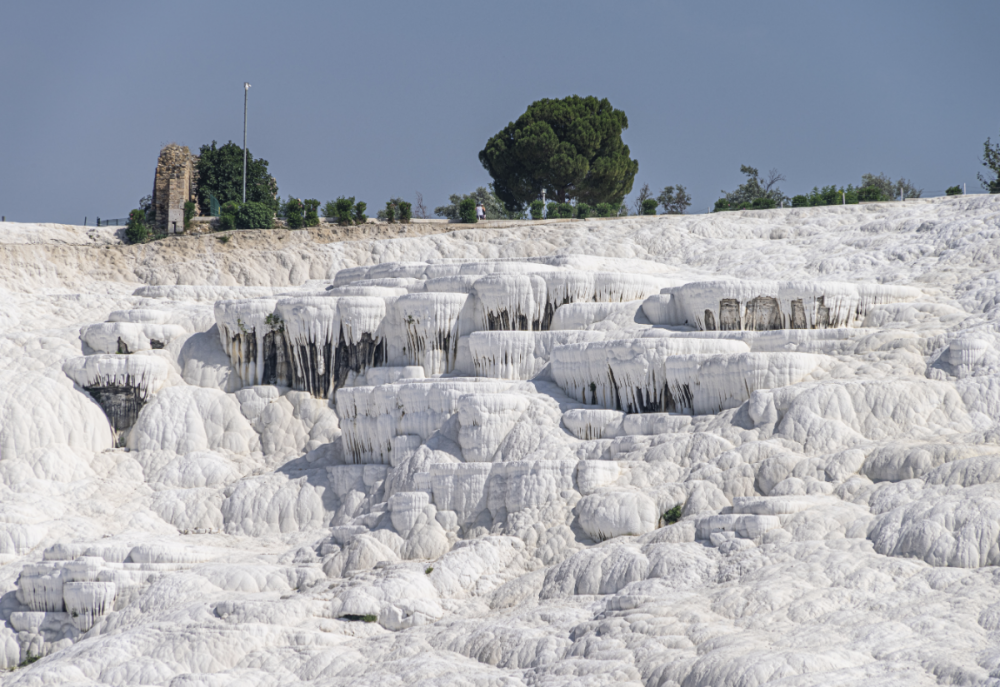 (I’d been celebrating our 25th birthday in the air en route from Bodrum, Turkey (where the family and I took a vacation), to Doha, Qatar (a flight connection) > Dubai (on business)). 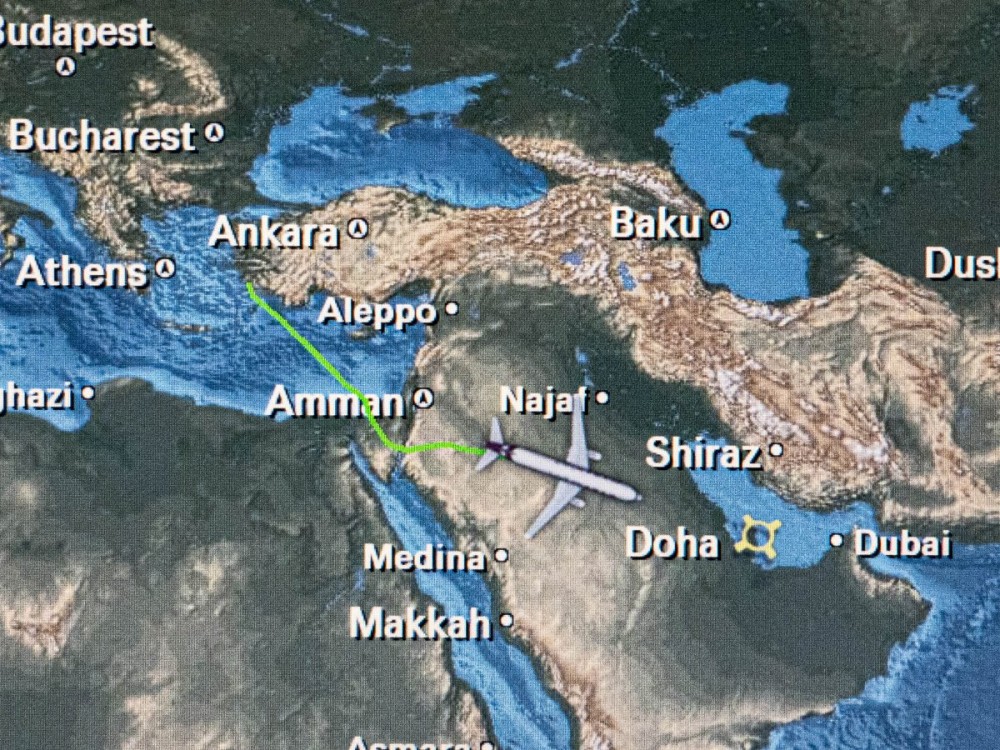 Out the window – parched landscapes: 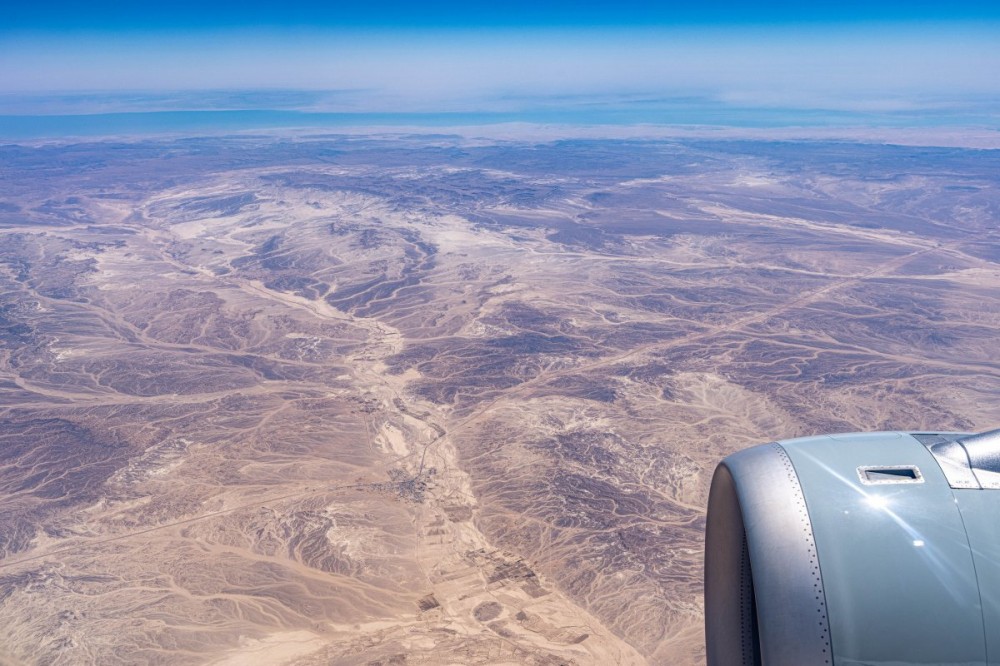 I change up the filters for a different take: 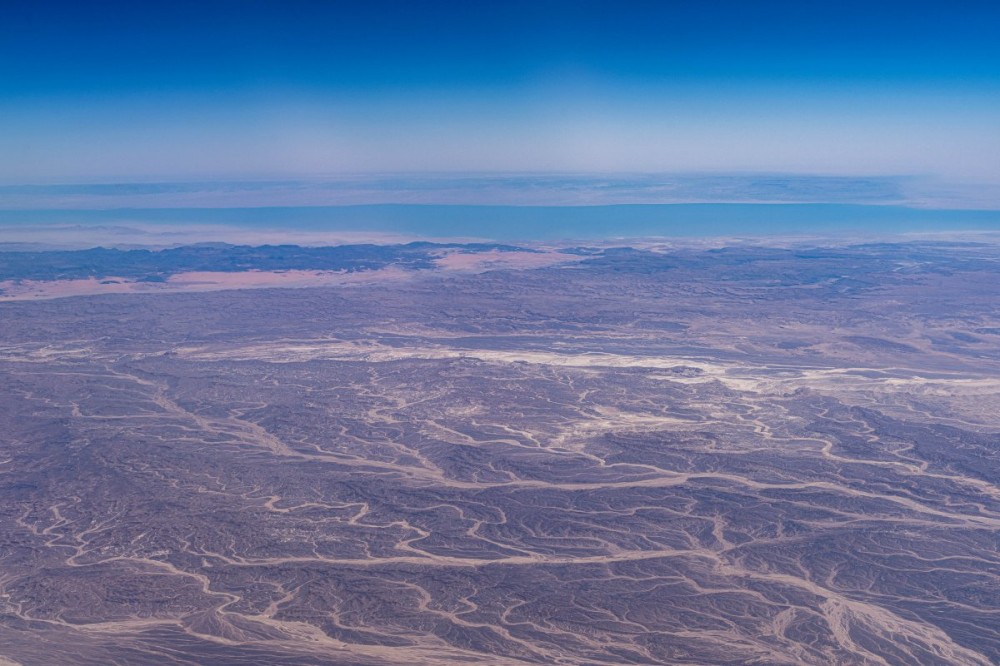 The mountains on the horizon over there I believe are in Egypt, if my knowledge of Middle-Eastern geography still cuts the mustard ->

Settlements and their utilities/infrastructural/agricultural (?) installations are occasionally visible – even in the middle of the desert: 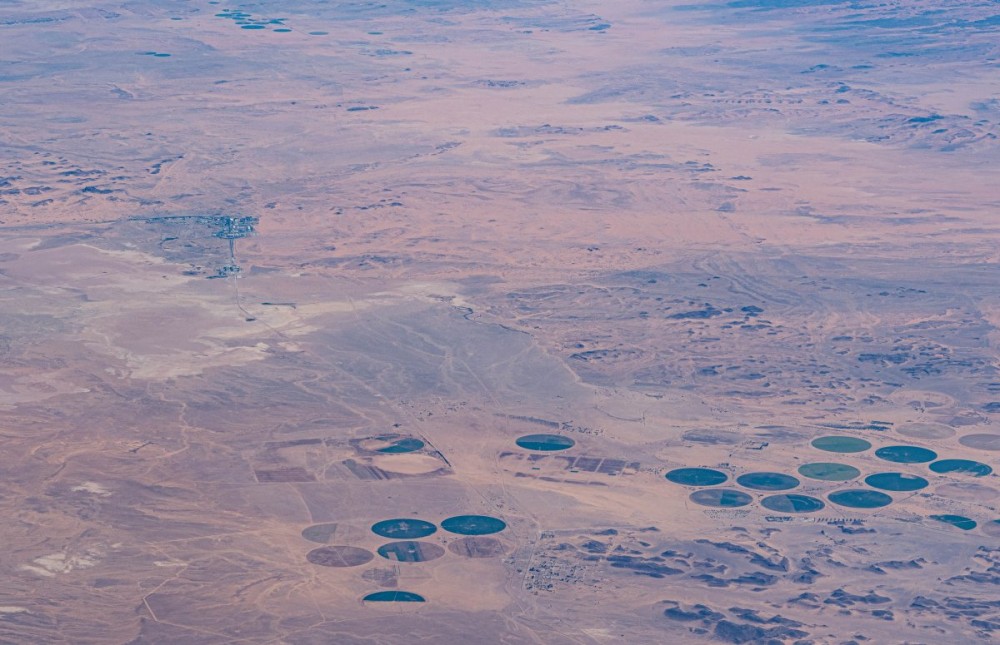 In places – not bad at all:

We land. Our connection in Doha is a quick one… 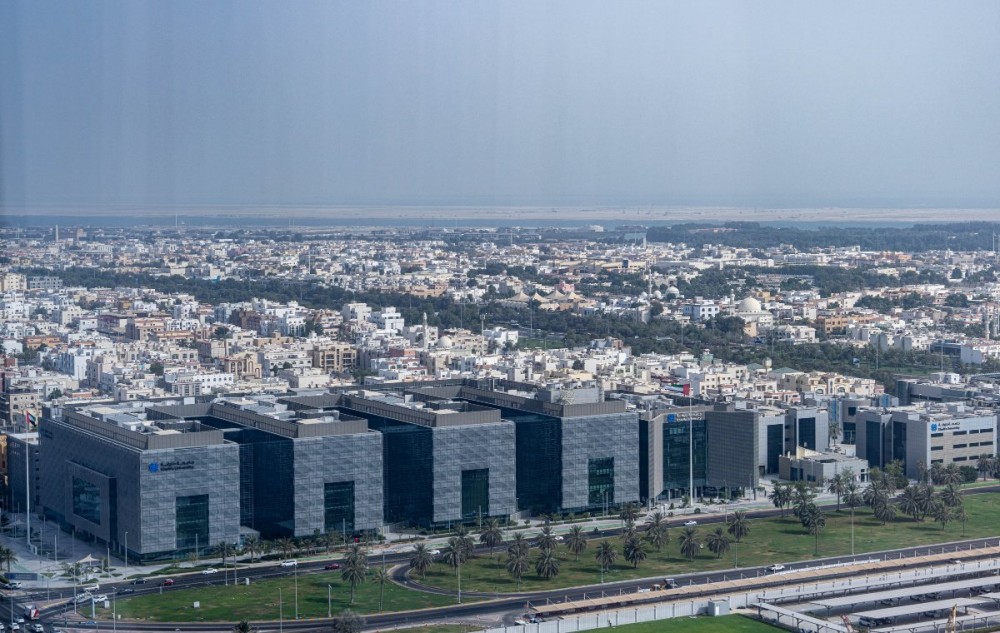 Pondering upon my visits to these shores, I realized I’d been to the United Arab Emirates in all more than 20 times; but never once in the summer. Why?!… 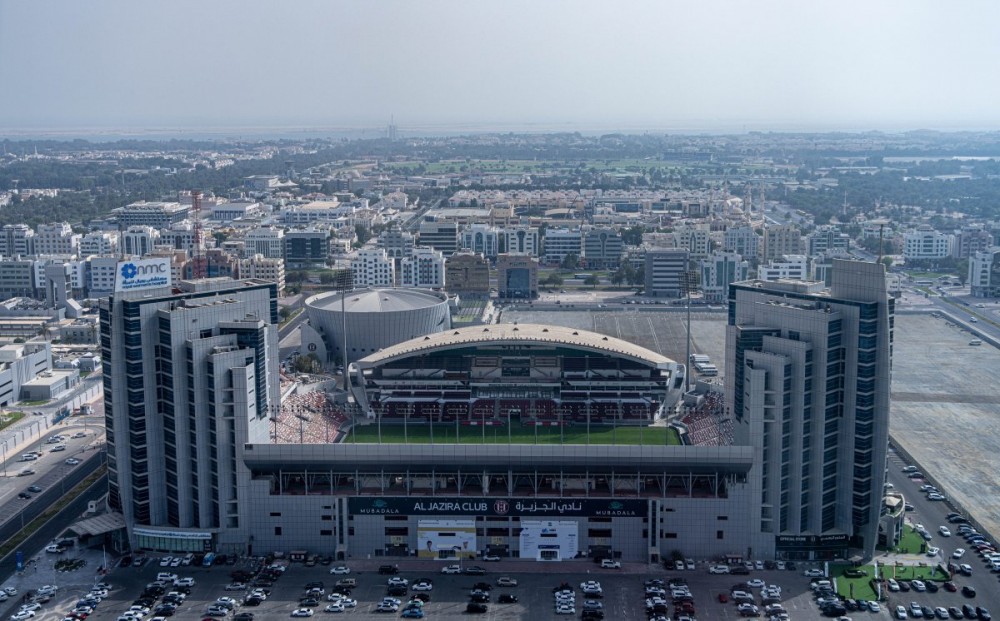 It’s all really quite simple. In the summer here, outside air-conditioned buildings and vehicles, the climatic conditions are just unbearable: around 40°C, sometimes up to 50! Accordingly, the streets are mostly empty. Everyone’s hiding indoors till the fall! 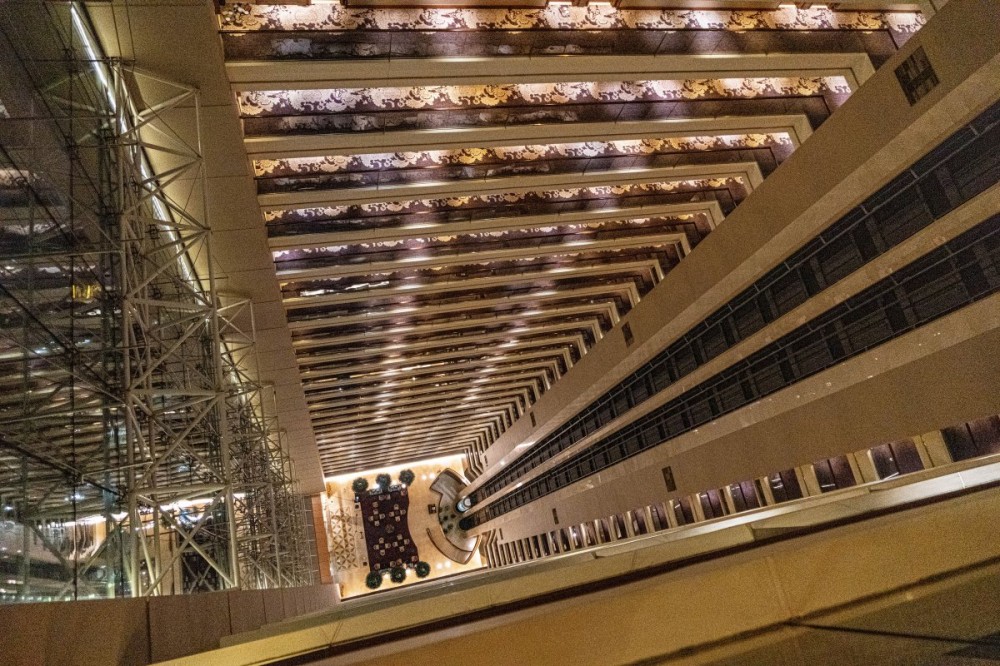 …A lot of those indoor spaces look like this: vast, tall, swish, and fast (the latter referring to the glass-paneled elevators whizzing up and down, that is). The elevators are so fast (while being almost completely silent) that you need to pop your ears after a ride! 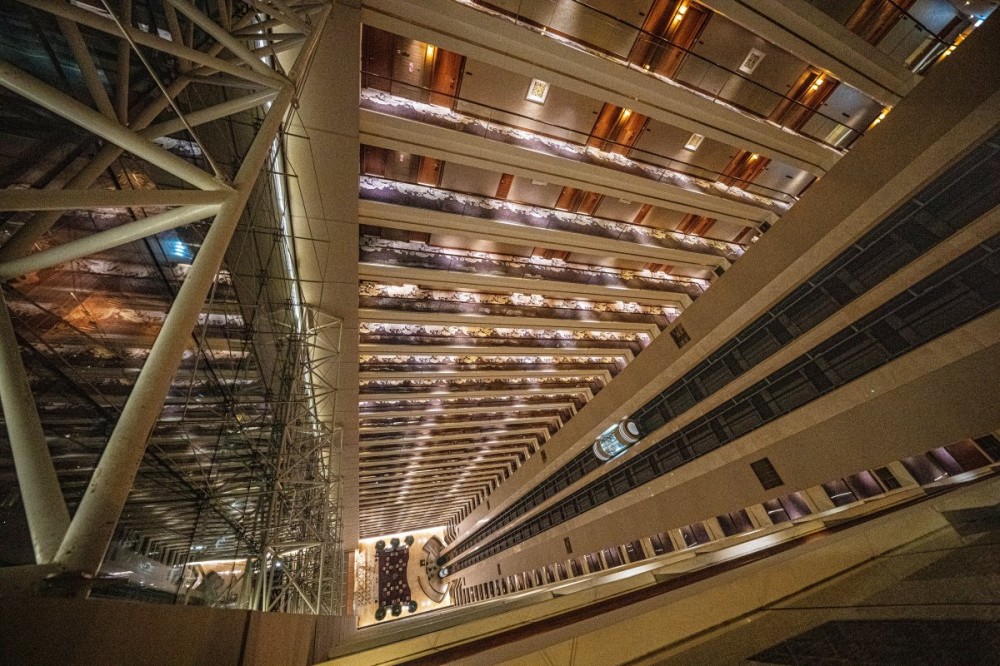 We rushed to the gate of our onward flight back home, but then had to endure a delay of almost an hour and a half. This normally wouldn’t be so bad given the good, comfortable standard of most large airports in the world today (especially hubs). However, Abu Dhabi International Airport falls way short of the mark in terms of comfort – so last century is it in every way. Narrow corridor-like walkways, none of the plush duty-free and assorted other shopping experiences (despite their being a fixture of hub airports for decades already), and in their place stalls with bizarre organic offerings…

So why this need for comfort in airports? I guess it’s just what I’m used to and have come to expect. For I normally fly around a hundred times a year, which works out on average once every three days. When flying so often you get used to the usual – high – standards of airports today, while always really appreciating the fact they’re so high: airports and airplanes in a way become an “extra office”, and if you’re irritated by a lack of basic comforts, then the whole experience becomes a chore, not a pleasure.

But why didn’t I go for a comfy, cozy, tasty business lounge for the 90-minute wait?

We were flying Etihad (which – hurray! – now flies to and from Sheremetyevo (my “local” airport), not Domodedovo as before (Qatar Airways made the switch too)). But the Etihad business lounge is in the middle of Terminal 3, while we were flying out of Terminal 1. Sure, it’s not all that far between the two, but the walk there and back could make the whole enterprise a pointless one (there was in fact nearly a kilometer between our gate and said business lounge). And they call this a hub airport?! 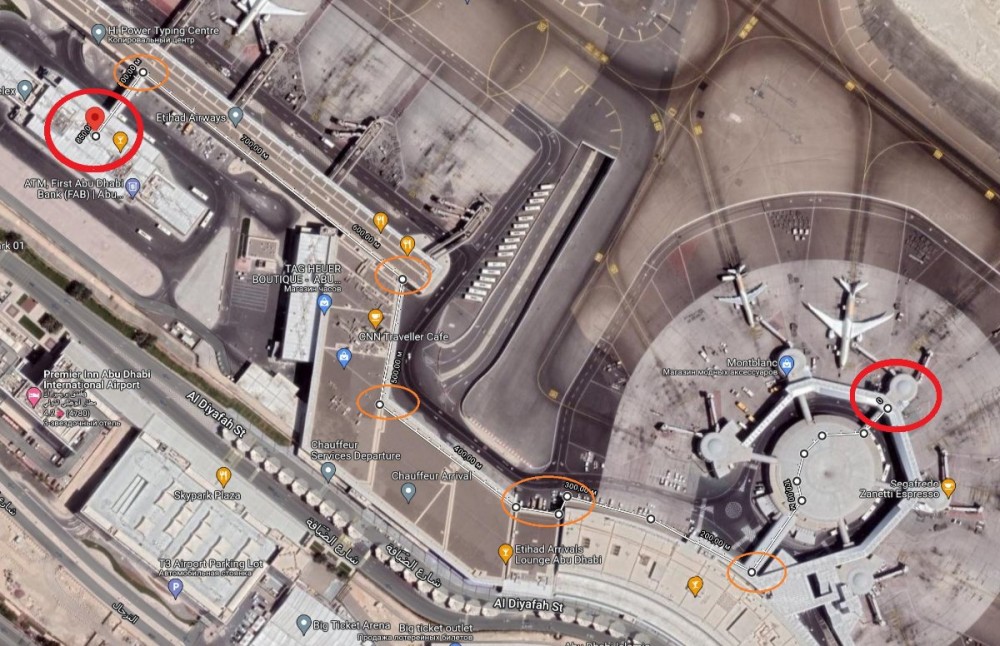 Btw, I once spent the night in this terminal (long ago). We were flying home from Australia via Abu Dhabi, but not long after take-off from Melbourne someone was taken terminally ill, so we had to land at Perth (still in Oz, just in case:). As a result, we were well behind schedule landing in Abu Dhabi and so missed our connecting flight. We had to spend the night in the dingy hotel that’s right inside the terminal.

But what’s all this talk of ~100 flights per year anyway? My yearly totals have been way down on that since the pandemic began in early 2020, and then this year they’re again way down. Indeed, this year I’ve only flown 19 times – the same as for the whole of 2004! Yes, all quite depressing. But that’s all the more reason to insist on decent, comfortable conditions in the few airports I do frequent.

And that means not having to put up with the stinking, vile, foul designated smoking areas. Especially when you’re a confirmed ex-smoker (I quit 5.5 years ago). I mean, why don’t they have extractor fans to get rid of the stench? Grrrrr. // This really is turning into a raging rant post, isn’t it?

Finally, we boarded the plane around 5am and off we flew. I slept much of the way, and was awakened as we were coming in to land. Can you tell/guess where?… -> 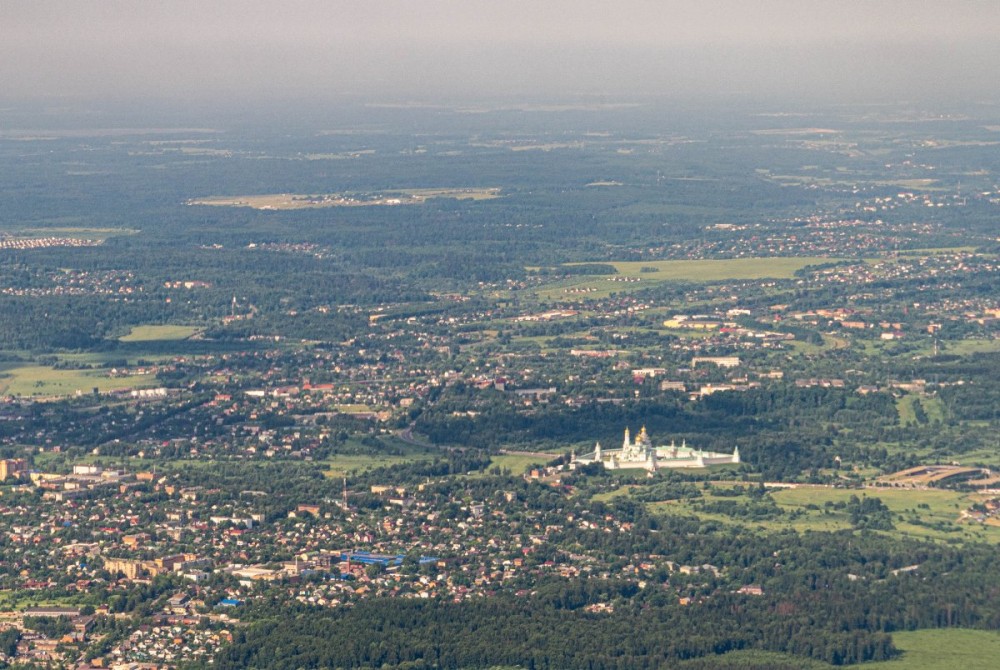